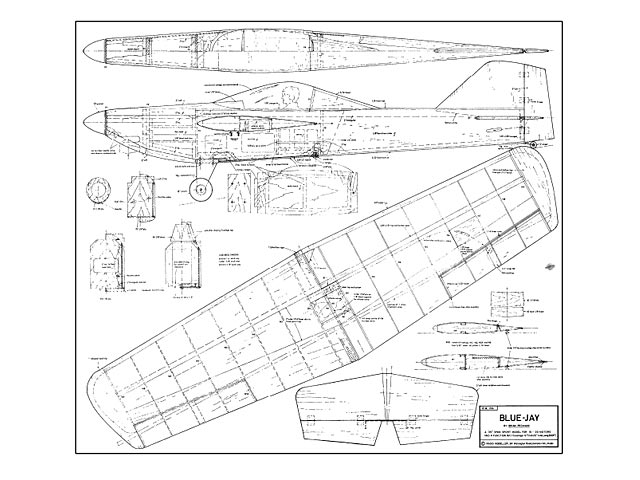 Blue Jay. Radio control sportster for .15 to .20 motor and 4 functions.

Quote: "This little model was designed to be within the 'Club-20' formula, though not necessarily an out-and-out racing machine, but a fun sports model with easy-to-fly characteristics. Although in one piece, it should fit in the boot of even a Mini - and the midwing configuration makes for easy hand launching if your flying ground happens to be of the rough and tufty variety.

Building Sequence: Structure design is very conventional, and should cause no chin-scratching for the average modeller, certainly for those competent enough to consider starting racing, anyway. These building notes, however, are a little unconventional in that they are not neatly divided up into wing fuselage, tail unit etc. This is partly because, if you follow the sequence indicated, as-sembly will be that much quicker and partly because of the model's being of the 'one piece' type, so that it is necessary to dodge about a little, from wing to fuselage and back again, as you'll see.

Contact glue the doublers to the 3/8 hard balsa fuselage sides and pin them flat on the bench, apart from the front which should have a 1 in block under the nose to set up the correct curvature.

While these are setting, cut the rib templates from 1/4. ply and make two sets of wing ribs. Build both wing panels at once by pinning down the spars and adding the ribs - not forgetting to tilt W1 for the dihedral. A template may be made for this, from the dihedral braces. Pack the ribs with 1/4 in sq as shown on the plan, to align. Add the top spars, followed by the leading edge and 1/16 sheeting on leading and trailing edges.

Now back to the fuselage; cut out the formers from ply and make up former F5 from 1/2 x 3/16 hard balsa strip. Cut the fin, rudder, tailplane and elevators from 1/4 in medium-soft sheet and sand them to section. Use the wing root template to cut the aperture in the fuselage sides to take the wing.

Now remove the wing panels from the building board, add the gussets, slot the ribs the nylon cable (a hole will be needed in W6), fit the cable, followed by the 1/16 leading and trailing edge sheeting. Check that there are no warps, then join the two halves. When quite dry, add the ply and balsa braces, cutting away the centre of W1, and slotting W2 for the servo mounting plate. Now add the remaining top and bottom sheeting panels, and the soft block tips, and sand to a final finish. Cut out the ailerons, cutting from both sides, trim the bottom of the aileron back, as shown, and add the 1/2 in block and end riblets W5, finally fitting the 1/16 aileron leading edge and false trailing edge to the wing.

Now assemble the fuselage sides over the wing and join with formers F1,F2, F3 and F5 respectively, bolting the motor mount to F2. Cut off the bolts flush or they may prevent the tank being fitted. Make up the tank box and fit the throttle cable tube. After fuel-proofing the tank box, the tank should be wedged in position with scrap balsa. Now draw the tail ends of the fuselage sides together..." 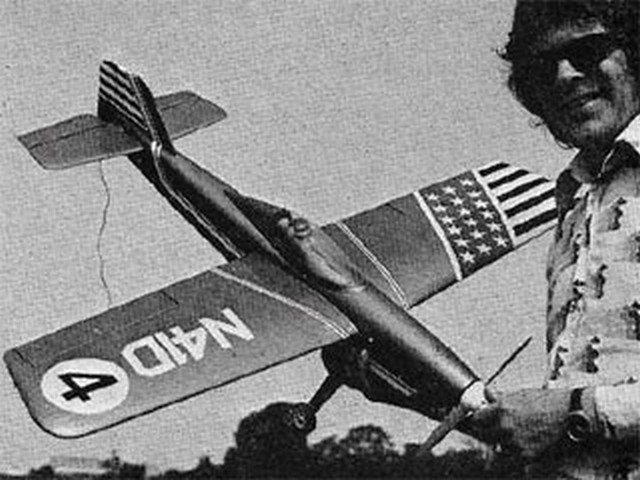