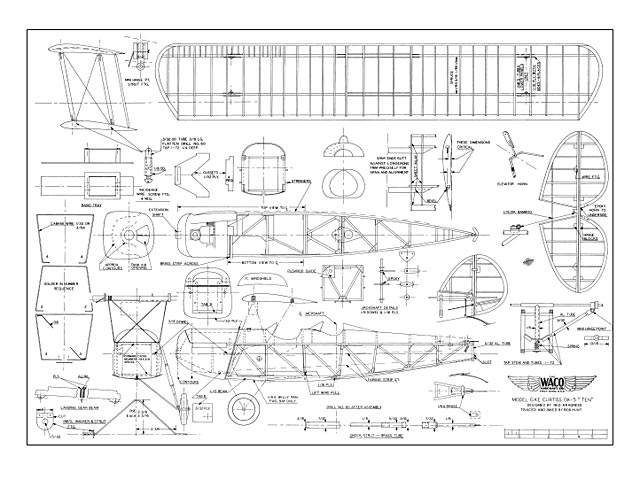 Quote: "Barnstormers loved the Waco. In 1928 a price of about $2,500 got you a new one with a good-as-new Curtiss OX-5 engine. Practically all of this class of airplanes carried three people - two passengers and a pilot. More payload would be asking too much of the OX-5 engine. Heavier payloads simply made performance marginal. The OX 5 powered Ten got off the ground quickly, climbed well in ground effect at full gross weight and rather slowly thereafter. Controls were light and response was pleasant, rather better than the Cubs, Aeroncas, etc which would soon appear. Today the Waco Ten would be called a STOL aircraft. However by the standards of her day she was only a little better than average in small field operation. With higher power engines the airplane naturally climbed much better. With the 200HP Whirlwind the grass weight takeoff was immediate, well under 400 feet in still air and against a breeze as little as three or four airplane lengths. Climb was spectacular...
This model is built to 1/12 scale (one inch equals one foot). There are two square feet of wing area. The model as shown by drawings and photographs weighs 17-1/2 ounces with a Cox 049 Golden Bee engine and Cannon 3 channel radio with 100 mah battery; resulting in a wing loading of 8-3/4 oz sq ft. Construction is straightforward but is unusual in the use of plywood gussets throughout the fuselage structure. Laminated wing tip bows and tail surface outlines reduce weight and improve strength. Metal fittings are easy to make if Stay-Brite or TIX solder is used. All brass parts are 1/64in wall tubing and 1/64in sheet.
This model depends on its wire bracing for strength and is much lighter than would otherwise be possible. Where the full scale airplane used streamline wire with round threaded ends on this model I used 20 lb. test flat monofilament obtained from the Cortland Line Company. The ends are formed into loops thru a ferrule of 1/16in OD aluminum tubing which is then pinched flat. These end loops attach to metal fittings or into epoxied hardwood since monofilament will cut through unprotected wood under stress.
This airplane had four ailerons. The lower ailerons were activated by push/pull tubes in the lower wings, and the upper ailerons were moved via a streamline interconnecting strut. A 1/12 scale model does not need ailerons in flight and benefits more from simplicity, ruggedness and weight reduction than from their presence. By using a radio tray module which slides in through the firewall, only minimal access openings are needed. Push rod connections are exposed in the cockpit and allow easy disconnection and removal. The nose cowl is made up of balsa blocks..." 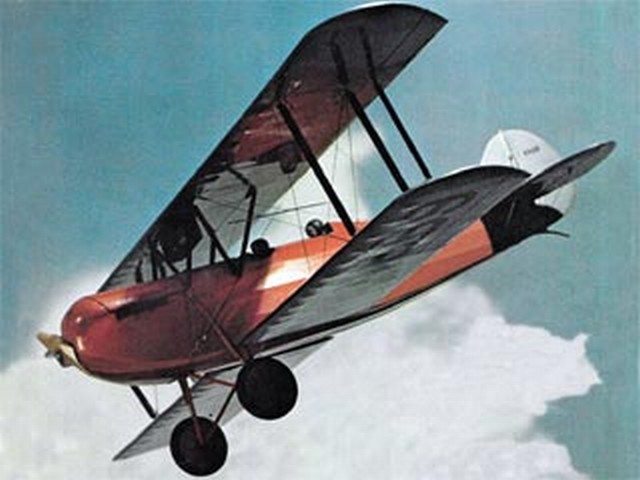