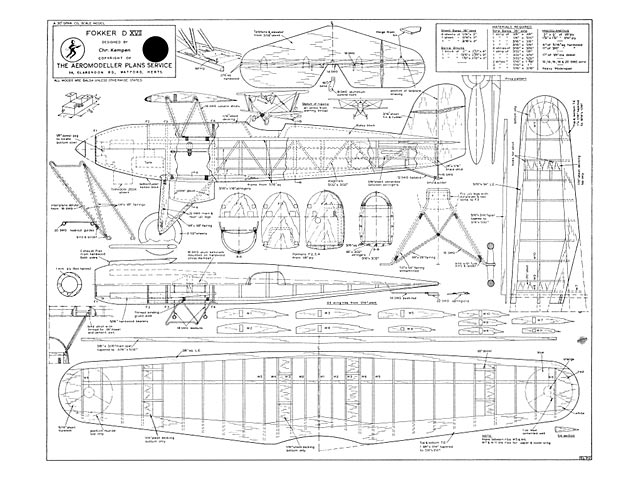 Quote: "This rakish aeroplane was Holland's contribution to the nostalgic biplane lighter period of the thirties, and powered with engines such as the Rolls Royce Kestrel had a maximum speed of 234 mph. Span was 31 ft 6 in, and examples were in service with the Luchtmacht Nederland at the beginning of World War II. It is also interesting to note that many KLM flight captains carried out their training in this aircraft.

The 30 in span control line model we feature here for 2.5 cc motors was produced by C Kempen, well-known Dutch modeller, famous for his 'Fighting Cocks' free-flight power jobs. It has won many Concours d'Elegance events in Holland and flight performance is equally as pleasing.

Building Instructions: Fuselage: Build the basic box structure. Cement F3 and F4 securely to the structure. Install, the engine bearers and use a lot of cement. Mourn hellcrank with its push-pull rod and two control wires. Bend left and right cahame struts and landing gear, attach them to the structure with Cotton, and cement well. Add 1/16 in sheet filling between formers F3 and F4 on the bottom. Install formers F1 and F2, the top decking and small side sheet of 1/16 in medium balsa can then be added. Top of the fuselage aft of the cockpit is hollow block, after shaping, cement in position. Now add the side and bottom stringers and sand the whole structure to the desired contour.

The detachable bottom and top fuselage sections are made of solid blocks, hollowed as shown. The top part is cemented to former F2 and the engine bearers, after first cementing the engine mounting struts to the bearers. The fin and rudder are shaped and cemented at the specified angle before attaching to the fuselage. The tailplane and elevator are provided with hardwood edges along the hinge line. The tailplane is installed and cemented to the fuselage, then the elevator halves are positioned by means of metal hinges.

Wings: Build a strong top wing as it takes all the load of the bottom wings. Cement all ribs in place. Add bottom strip of the trailing edge first, and after cutting away the arc in the centre, add the top strip. Cement leading edge and add wing-tips.

The same method is followed for the lower winghalves. Attach the upper wing to the cabane strata by means of beech dowels. Attach one side first, check wing position with centre line fuselage, put in the dowels on the other side (check the horizontal alignment) bind with cotton, and cement well.

Shape interplane struts sod attach them to the upper wing. Attach the lower wing halves to the fuselage and then to the struts. Check alignment from the top. Add 1/16 sheet around the struts attachment points. All wires from struts and landing-gear are faired in with sheet. For wing-bracing wires, carpet thread is used and to keep these wires tight, small springs are employed as shown.

Covering and Finishing: The entire model is covered with heavy weight Moclelspan. after the nomad amount of doping, sanding sealer, and sandpaper, are used to get a smooth sutface before painting. The whole model is painted dark green, after which the roundel's and lettering are applied. The radiator is installed after the entire model and the inside of the radiator have been painted, leaving small patches unpainted where the radiator is cemented to the fuselage. Then paint the outside of the radiator.

Flying: The centre of gravity is located on the front line. The prop shown looks rather big, but a powerful 2.5 cc engine swings it easily and gives the model a realistic look on the ground. Flying on 45 to 50 ft lines, the model is very stable with in degree of sensitivity that permits mild aerobatics to be flown and due to the long u/c, landings are easy." 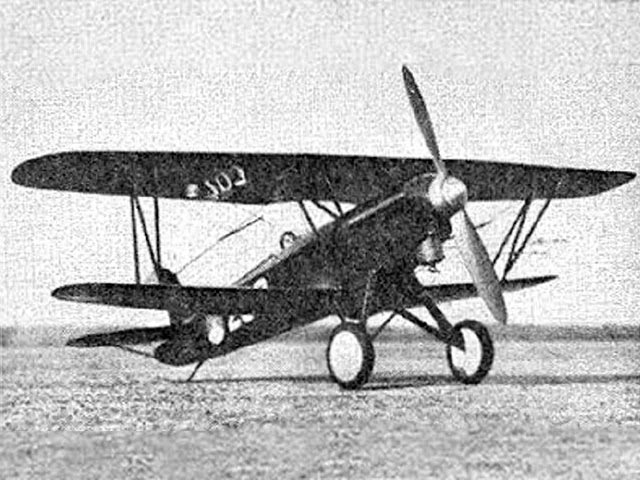