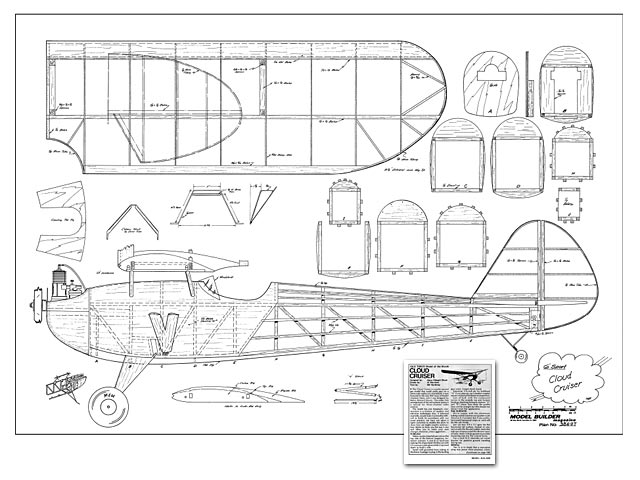 The Cloud Cruiser is a pretty parasol gas model that could easily pass for a semi-scale replica of a homebuilt. It was featured in the July 1937 issue of Model Airplane News, and it was designed by Harry Edward Moyer. The scale-like arrangement of the tail surfaces makes it a natural for three-channel radio control.

The model has one drawback; construction is a mixture of modern and old-time techniques that, if followed explicitly, would make it somewhat difficult to build. In accordance with our usual practice, we have not taken it upon ourselves to modify the plans to show how we might simplify construction. Better to show you the way it was and allow you to make your own changes. However, a few suggestions...

FUSELAGE: Make a series of partial saw cuts on the top side of the bottom longerons, between stations A and B to facilitate making the sharp bend. Fill the cuts with CA while it's pinned down to build a side. Install well-gussetted brass tubing in the lower fuselage to plug in the landing gear wires. Forget shock travel.

Substitute 1/4-inch ply for bulkhead 'A' if you plan to use a modern engine mount instead of the beam arrangement. Lots of luck with the compound curves in the outside top and bottom fuselage sheeting between stations 'A' and 'B'! More than likely the profile lines will be straight but this should not detract from the appearance.

TAIL SURFACES: We're happy with the aluminum tubing outline used on our quarter-scale Aeronca C-3 project, but if you prefer, laminated basswood strips or reed will do this job nicely. Just use two 1/4 x 1/2 spars for the horizontal tail surface, instead of one, and as with the fin and rudder, make the stab spar of spruce and the elevator spars of balsa. Insert 1/8 ply gussets to provide mounting area for the control horns. Use a stock R/C steerable tail wheel bracket for positive ground handling during taxi.

WINGS: The (s) is to imply that a one-piece wing may prove more practical, unless..." 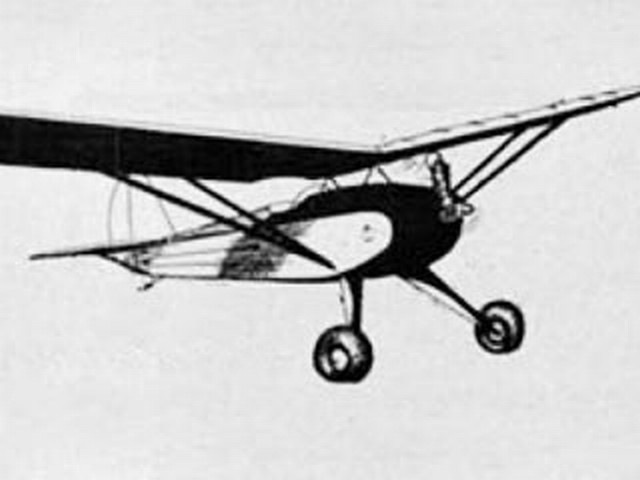