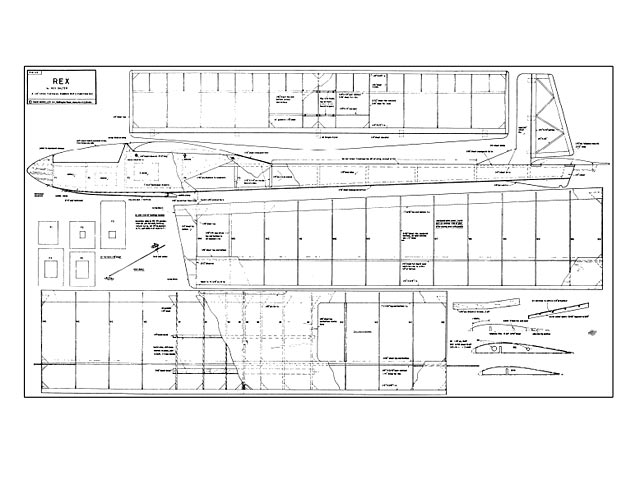 This project was envisaged as a sturdy high-performance sport thermal soarer. Personally I do not have time or inclination to fly in competitions, but I have flown in the company of some people who do, and they have remarked favourably on its performance, so I have every reason to believe that it would give a good account of itself in competition. However, as I say, I fly it purely for pleasure - and a great deal of pleasure it has given me, too.

Rex has been flown very successfully on both manual tow and from a bungee launch. The sturdy part has never been tested, as it has never crashed! However, by one rather amusing incident, the strength of the wings has been very thoroughly tested. Have you ever noticed how, after a time, fellow modellers become less friendly? Plenty of soap and sponging under the armpits made no difference, in fact the situation became worse. They were fed up with towing the model up while I just stood there issuing orders. Then the penny dropped (the tow winch, actually) and my wife was pressed into service. The first attempts, in still evening air, resulted in not really enough speed - due to high heels. However, Sunday saw us at the airfield in a 15 knot wind, and the wife equipped with plimsols and three days' solid sprint training. She was then briefed (no pun intended!) to the effect that if I shouted slow, she would slow up, and if things got really hairy she would stop on my command.

600ft. of line were run out and the model was then launched. I now discovered that 600ft away upwind it was impossible for her to hear my commands. My wife took of like Valerie Bortzof and the model went from 5 to 600ft, giving a perfect imitation of a Lightning on re-heat. I now feel that the wings are of proven strength.

Construction. Fuselage. The sides are of 1/8in sheet, with 1/16 in ply doublers at the front and 1/4 x 1/8 in strip doublers at the rear. If the formers are cut to shape and fitted, then the fuselage is joined at the rear with the 1/4 in spacer, then the cross pieces may be added and the bottom sheeted..." 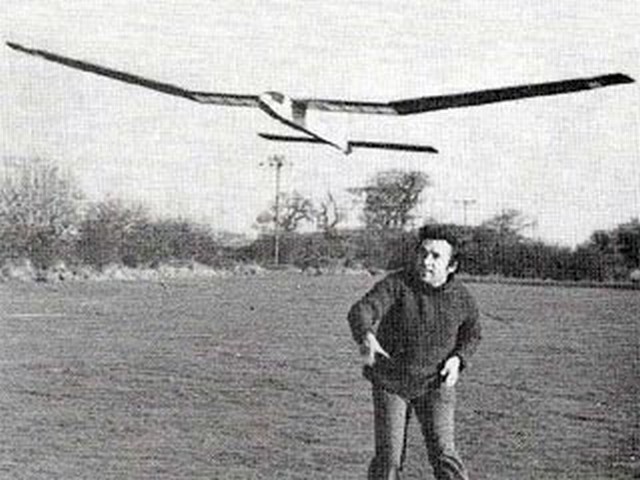