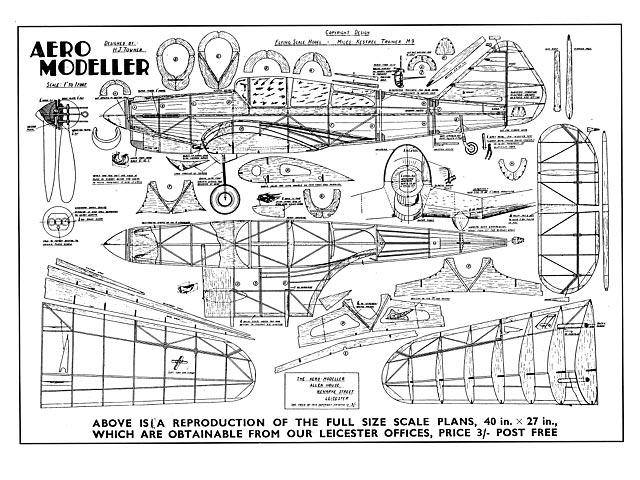 This is a later reprint in Aeromodeller in a nostalgia article in the 80s, and has been blown up to full size.

Quote: "The Towner Kestrel. The appearance of the private-venture two-seater Miles Kestrel M9 Trainer caused a sensation in 1937. It was only some 15 miles per hour slower than the latest Hurricane fighter; eventually the design led to the Master advanced trainer which was produced in numbers for the Royal Air Force. The proportions and shape of the Kestrel obviously appealed to Harold Towner, one of our foremost flying scale modellers, and he built a one-inch to one-foot model and showed it at the Northern Heights Gala on 19th June 1938.

Flying scale models designed at this time by such experts as Towner and C Rupert Moore were intended to represent the performance of their prototypes, so it was not merely sufficient that the models should fly. As a result the Towner Kestrel was imbued with a relatively high speed in flight (quoted as being in the region of 25 miles per hour). Copyright of the design was immediately acquired by Aeromodeller and full-size plans were made available from 20th November, the publication date of the 1938 Christmas Number which contained a full description of the model by its designer.

Additionally, a deluxe kit of building materials for the Kestrel was produced by Super Scale Kits; this included the already completed triple gearbox and sprung (curtain rod) undercarriage legs, so a builder had no recourse to soldering during construction. Other finished items in the kit included a two-bladed 12-inch diameter by 15-inch pitch commercial Paulownia propeller, two-inch diameter celluloid wheels and a specially moulded windscreen whose curved top faired into the cabin roof. The kit was, as a result, not cheap, and cost ,E1-5s.0d (E1.27.1/2p) which factor must have kept the volume of sales down despite the arresting advertisements for the model that appeared at the time.

Photographs of this model in the pre-war issues of Aeromodeller have always provided me with a feeling of admiration for this Towner design, my favourite being the splendid shot taken by Ian C Lucas showing the Kestrel at speed that appeared in the January 1939 issue. A number of years ago I wrote to this well-known modeller (he designed, amongst others, the Diasphere diamond section fuselage rubber-powered composite model which could be flown off land or water, described in July 1941 Aeromodeller) to try and obtain a print of the Kestrel photo (another that I was after was the shot of Howard Boys sitting behind his tricycle tailless model at Fairey's that was published in July 1939 Aero Modeller - a study of Howard that was perpetuated by Rupert Moore on the coloured card cover of the book Scale Model Aircraft That Fly) but alas, Ian Lucas had already disposed of his early model aeroplane photographs. However, in the case of the Kestrel I need not have worried since I have recently been able to take some similar shots, in the air, of this model - and a home-brewed one at that!" 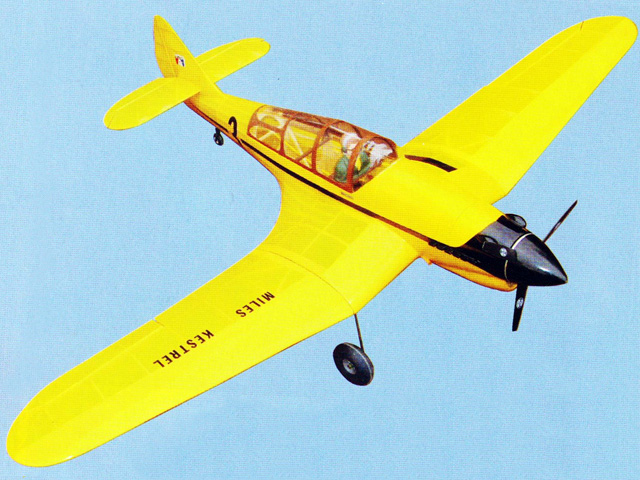