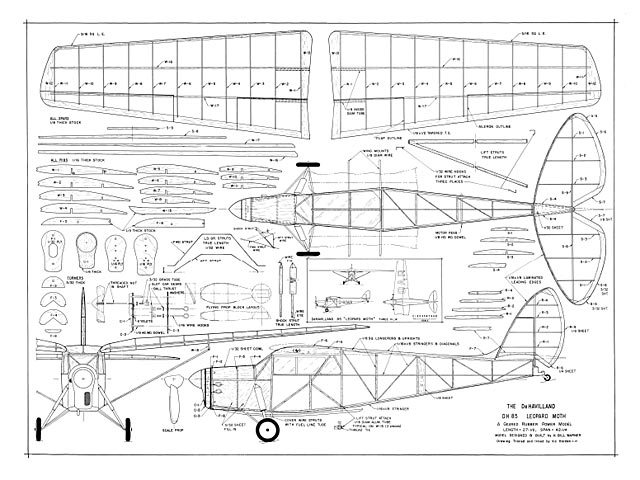 Quote: "Free flight rubber-powered scale at its very best, fine scale subject developed by one of country's better scale designers. De Havilland's Moths of one version or another have been winning scale contests at the Nats and local meets since the 1930s. By BILL WARNER.

The first time I saw the Leopard Moth with its characteristic DeHavilland tail and graceful lines was in May 1935 Flying Aces. This small, rubber-powered model by Avrum Zier was really the inspiration for one of the most interesting models I have ever built. Further inspiration was supplied by Stephen Lambert's succesful Puss Moth (oz6282) in the July 1957 MAN; Ron Moulton's article in his book, 'Flying Scale Models' which dealt with gear-driven rubber models; and PG Cooksley's 3-view Moth drawings in the Sept 1963 Model Aircraft. I mention the above to give credit where it is due, and to help you find more information should you become a Leopard Moth fan. I am also indebted to the DeHavilland Aircraft Co Ltd for their cooperation in furnishing a copy of the original GA 3-view drawing, which, I must admit, was less helpful than the more accurate Cooksley drawings.

The DH 85 was a precocious youngster, winning the British King's Cup race at the tender age of six weeks in 1933. The same characteristics which made it an outstanding aircraft of that day also recommend it highly today. The graceful, tapered wings and distinctive tail combine with the deep nose cowling covering a 200 hp Gipsy Six to say 'DeHavilland' to even the least astute abserver. No Piper Cub, this.

This is no model for the beginner, but rather one for the modeler who has built a few simple rubber ships and wants to explore something a bit more exotic (short of a radio-controlled autogyro). It was not designed to win contests, although flights of one to two minutes are possible. It was designed to be consistently stable in flight, give a realistic general appearance, and perform in a reasonable manner as compared to the usual endurance rubber scale job. The stability in flight was accomplished by adding a bit of dihedral to the tapered wings with their natural wash-out effect, increasing the stab area, using Williams Brothers plastic wheels for pendulum effect, and keeping the weight well forward for penetration. Torque was minimized by turning a small prop at high speed driven through gears. This also allowed scale-length landing gear to be used with aimple prop clearance. It was decided to use two rubber motors, kept short and forward to eliminate that old bugaboo, CG shift due to rubber knotting up near the tail.

The ship is rock-steady in the air, with air almost perfect scale speed throughout the flight due to the smoothing-out effect of drive through gears. I am sure that the model would perform in an equally fine manner using the Cox Tee-Dee .020 engine for those who do not wish to go through the exercise of building the nose assembly..." 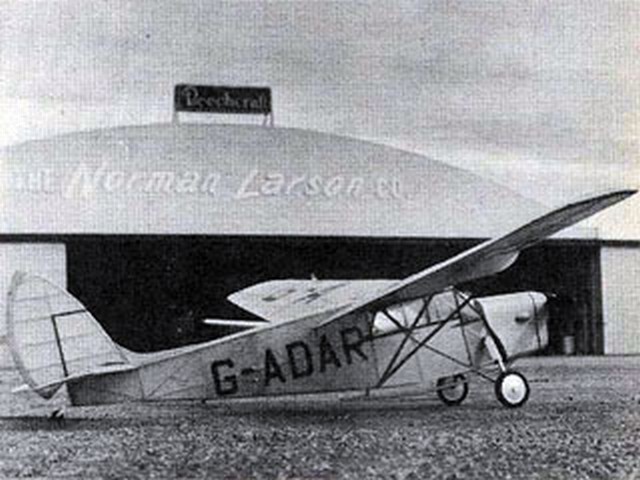