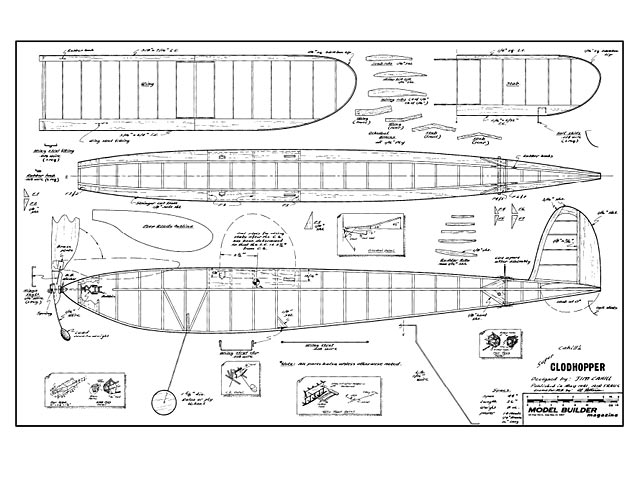 Super Clodhopper. Free flight rubber model originally from 1941. Contest rubber model by Jim Cahill. This is a later redrawn version of the plan by Al Patterson, from Model Builder Jan 1980.

Jim Cahill's Super Clodhopper, published in the May 1941 issue of Air Trails, was designed to be a simplified yet equally good flying version of his famous Clodhopper, the 1937 Moffett Trophy winner. It's simplified, all right. Instead of the Clodhopper's contoured, fully planked fuselage, this model uses a simple box with a single stringer on each side. Gone also are the built-up box spars in the wing and stab, the Super Clod depending instead on heavier leading and trailing edges to provide strength.

This model has a few interesting features that are worth mentioning. First and most striking is the anhedralled stab. What the anhedral is supposed to do is anyone's guess, but it's sure looks neat. The wing halves are designed to come off for easy transport and also to prevent damage when the inevitable happens. The airfoils look to be the same as those used on the original Clodhopper, including the undercambered stab section and airfoiled fin to give the model a right turn (the flight pattern is right-right, incidentally).

The original Super Clod was not fitted with any sort of DT (remember, those were the days of no-max flights), so the plans don't show one. It would be easy to rig one. though. as the rear end of the fuselage is made to be removable, and it would be a simple job to hinge this section at the top so the whole tail section would pop up the required 45°." 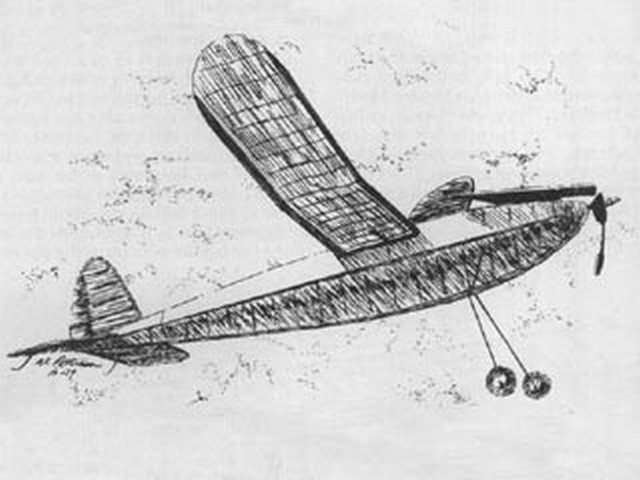