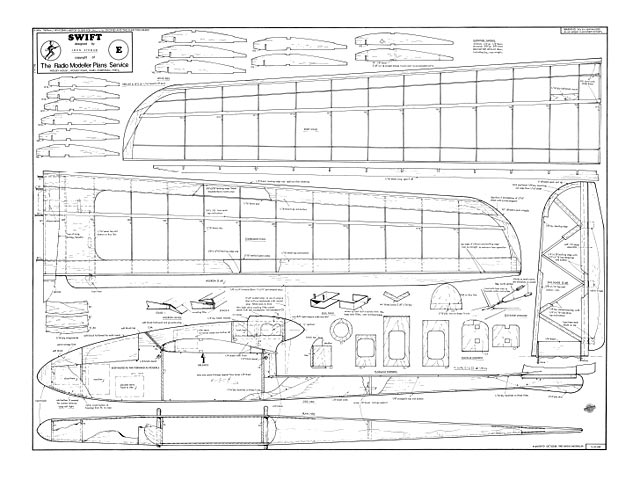 Quote: "I HAVE OBTAINED considerable enjoyment from flying a couple of powered gliders. One is a Super Snipe using a .06 cu.in. G-Mark and the other is an own design using a .049 Cox Black Widow. Having got the hang of flying them fairly fast and flat it causes many other modellers to wonder at their performance on such small engines. On an engine run of about five minutes they go almost out of sight upwards. On a good day I can get another 20 minutes in thermal. It is obvious that most powered gliders have their engines stuck on as an afterthought but the idea behind Swift was to design a more attractive aircraft as a powered glider in the first instance.

The layout I have chosen seemed a natural for a V-tail. Aileron response is very satisfactory and at the same time removes the need to mix rudder with the elevators. To some the ailerons might look a little generous but these gliders do fly more slowly than conventional radio controlled aircraft and need the extra control area. The natural consequences of a pusher engine is that the centre of gravity is likely to be too far back for stability. The prototype Swift was no exception and needed 3oz of lead in the nose to obtain the correct balance point. I was not too happy about significantly increasing the length of the nose for fear of getting the centre of lateral area too far forward - too much side area up front can cause the fuselage to try and 'weathercock' round and fly backwards! The prototype, however, shows no sign of this even after I have added an inch.

To further reduce or even avoid the need for ballast, remember to build everything behind the C of G as light as possible and fit all the hardware as far forward as your ingenuity will permit. Before starting to build a Swift it will be necessary to sort out a power unit and propeller. With the design as drawn one is restricted to using a prop no larger than 6in (it would not be too difficult to raise the engine mount to accommodate a 7in prop). If you intend to use an engine which only runs one way (ie. anticlockwise) then it will be necessary to track down a pusher prop. 6x4 pushers are fairly common. I wasted a lot of time searching for a 3-bladed 5x3 pusher which I now suspect was the figment of someone's imagination! If you intend to use an engine which can run in either direction, then the whole range of 6in tractor props can be used. I chose to use a fairly old D.C. Wasp and the 6x4 pusher is not ideal for this application. 25% nitro in the fuel was found necessary to compensate. At a future date I think I will re-engine with a P.A.W. 80. Gig Eifflaender of PAW reminded me that it is necessary to fit a steel spacer/washer between the prop driver and crankcase of a pusher engine. This will not only avoid unnecessary wear but may also prevent the crankshaft rubbing against the backplate and reducing the performance.

Wings. Cut the top and bottom sheeting of the trailing and leading edge using a straight edge or stripper. I use a carpenters' marking gauge for this type of work. Using the same method cut out the 1/8in balsa trailing edge cap strip and leading edge inner strip. Note that the full depth 1/16in spar is tapered and must be made using a straight edge and is notched for each rib. Make root and a tip rib templates from 1/16 ply. Rough out a set of rib blanks..." 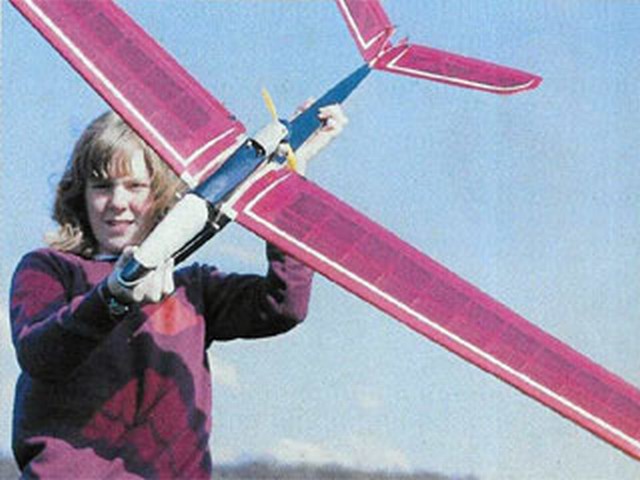