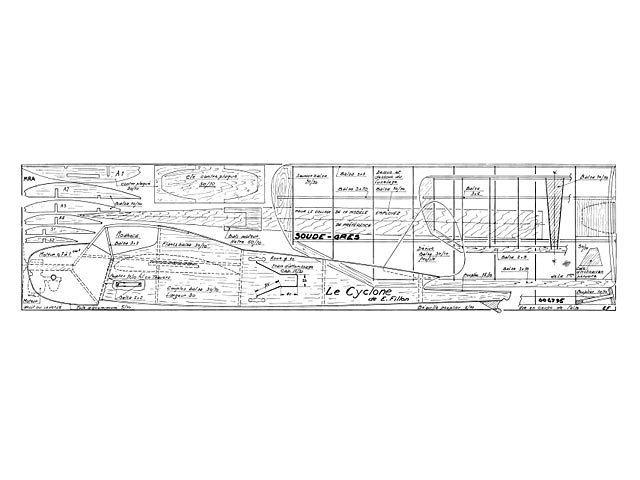 Update 17/6/2022: Added English translation of article text, thanks to JMP_blackfoot.

Not all modelers are fans of rubber models. There there are fans of the motor model and it is to answer several requests that I present you with the Cyclone as an insert. It is not a great competition machine, but rather a small motor model of easy construction, easy to fly, allowing you to become familiar with this type of model.

Designed for 0.7 to 0.9 cc engines, I have built a number of them with the 0.8 Micron engine. But any straight or inverted engine can be used. The Cyclone looks like a small touring plane with a shoulder wing; a small glass cabin gives a semi-model look and the forward vertical rudder is very characteristic (see Arado).

It is the construction of the fuselage which is special, the wing being classic.

The fuselage of rectangular section is composed of two sides of 3 mm balsa cut to the silhouette of the profile view of the fuselage. (Note: The draftman not having represented the lines of the wood in the engine cowling area, you should not cut out your side panels in line with the landing gear-carrier former, as you might expect, but they should follow the engine cowling contour. These two sides joined by a few pins will be sanded to the contour to be absolutely similar. Place the two small strips forming the cabin. Adjust the passage of the wing support key. The fuselage is of constant width from the trailing edge of the wing to the the front.

On one of the sides, draw of the formers and glue them in place. The landing gear former is a box open at the base composed of 2 strips of 2x2 and 1 mm poplar planks 10/10 cross grain. The motor mount is sawed out of hardwood (beech) of 6 mm thickness; With all the formers of constant width of 30 mm being glued, pinch the end of the fuselage and determine the width of the 2 rear formers and install them. The top & bottom of the fuselage are covered with 10/10 balsa, the tail fin, made of 30/10 balsa, carefully sanded and profiled, is glued in place to the fuselage. A tailplane support plate is glued to the rear part. Check that this is absolutely parallel to the wing support key.

Once the motor is installed, with a strip of light cardboard, trace the contour of the of the exact cut-out of the engine cover and, with the help of this template, cut a strip of 5/10 aluminum sheet to close the the engine cover. The wing key cut out of 30/10 plywood should fit snugly into the adjusted slot of the fuselage. This key is removable for ease of transport.

The fuselage receives before painting a light coat of diluted casein glue to fill the pores of the wood.

The wings and the tailplane present no particular difficulty. The wing root rib must be inclined according to the slope of the dihedral. The wing attachment box is made of the key cutout and 2 poplar boards glued on both sides. Mark these two boxes if by chance you had not sawn them absolutely interchangeable.

The wings and the fixed plane will be covered with fine Japanese paper or silk with 2 coats of dope. Nothing to report for the landing gear which is simplicity itself and must by elasticity hold its housing.

The setting up will be all the more simplified as the well built aircraft will present similar flying surfaces, flat and of identical angle. The first operation being the checking of the balance, you will perform this one before going to the flying field; the balance point will have to be in line with the former acting as the back of the cabin. Add weight if necessary. The hand-launched model (without a propeller, it is safer) must arrive normally on the ground in a fast glide. Set the incidence of the fixed plane to achieve this result.

When the engine is running at full throttle, the overturning torque will cause the propeller to rotate to the right and the aircraft to turn to the left, resulting in a slide and turn. Combat this phenomenon by tilting the engine axis to the right and also if necessary by sticking a small flap of bristol (fletnner) at the back of the fin and bend to obtain a right turn. This aircraft, being a shoulder wing, does not have a significant nose-up torque and the motor set at 0° to the bottom surface of the wing gives good results. If the model has a tendency to pitch up on the motor, give the motor a little bit of downthrust. And now, my good friends, back to work and good luck!" 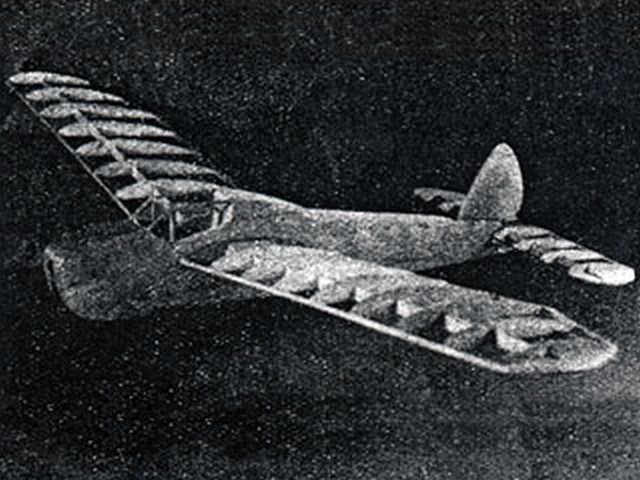 I am contemplating building this humble Emmanuel Fillon design with light R/C and therefore had a good look over the plan and pictures.
It turns out that the wingspan is not 28 inches but 36 inches.
More important to would-be builders is that the drawings show a root rib with a dihedral angle of around 15°, while a simple check of the photos reveal that it actually is a more realistic 10° or 80mm each side.
Jean-Marie Piednoir - 30/10/2021
Add a comment