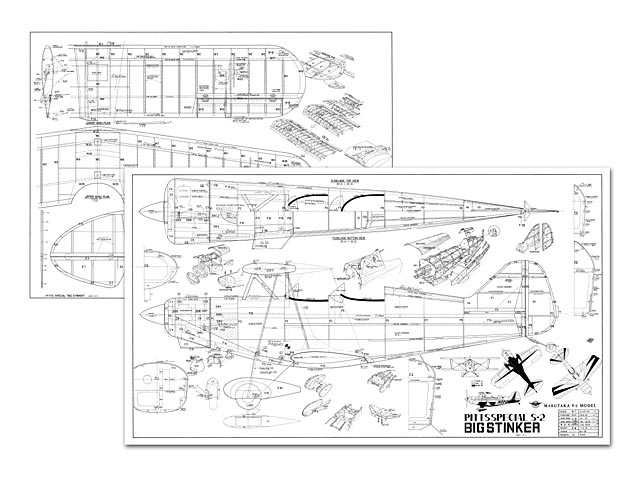 Quote: "Designed with an emphasis on control sensitivity, the S-2 is a top aerobatic performer. Its design features the ability to remain fully controllable during power on or off stall maneouvres. Due to its rugged construction, ease of maintenance and stable flight characteristics, the S-2 is also considered to be a superior aerobatic trainer as well."

Quote: "The Pitts scans are rather large ...Let me know if this doesn't work and I'll try emailing direct. Someone has sketched a single seat cockpit and modified fin but I'd imagine it won't take much to tidy that up. I think most parts can be inferred from the plan and supplement sheets but let me know if there are any parts missing. I'll measure or scan the kit parts and send them. I need to measure the undercarriage and get that to you. Thanks again for the fantastic web site. Have a great day, I'm about to enjoy a cold cider....it's 28 degrees here!"

Another Pitts kit! Seems like just about everyone has a Pitts, but Royal Products has a one and two holer. No, not an outdoor 'thing,' but a Pitts S-2! The extra 5 in or so in the fuselage length for the extra cockpit makes a difference in the performance, for a model, that is!

Construction: The plans are quite good and I could find no fault with the balsa and plywood selection. One feature noteworthy was the die-cutting - crisp, sharp and accurate. A joy compared to other brands. I elected to start with the fuselage. Who wants two wings on the work bench? The fuselage construction is straightforward model building, going together quite fast with the use of Hot Stuff. The basic frame-up of the plywood formers and balsa stringers took less than an evening following the manufacturer's instructions. All of the sheeting, blocks and miscellaneous parts fit with little or no modifications. The cowl and engine mount assembly is practical and easy with the pre-shaped and cut balsa blocks.

The horizontal stab and vertical fin are a piece of cake. Glue them up, a little sanding and install. I used a C & B tail wheel assembly in place of that which was supplied (most of the hardware is in the kit). It looks a little more realistic with the springs, etc., on the tail wheel assembly.

Step back and look it over - nice! The heavy dural gear will help those not-so-soft landings. Don't tell anyone that the 5/32 wire, which is a part of the gear, takes most of the load.

I was quite impressed with the foam wheel pants but only after working with them. They sand and finish like balsa with an added plus of being lighter overall. Kraft wheels were installed in the pants as I did not want to bottom out on landings. The cabane struts are easy to install and key into the fuselage, assuring proper alignment. Two bolts hold the upper wing on the assembly.

On to the wings. I was amazed at how quick they went together. All the parts fit and I enjoyed building them. Not an excessive amount of work considering two sets of wings. They seemed quite strong and with the addition of the 'N' struts, which are functional, made the overall wing/fuselage structure seem unbreakable.

Mating of the wings to the fuselage was a snap. I used a Robart incidence meter to double check all of the incidence angles and thrust line. No major changes were necessary. Be assured that things are right with this tool, something everyone should have around the shop.

Check all of the controls at this point. Make sure all of the surfaces move free with no binding. Du-Bro bolt on ball links were used on the aileron inter-connects rather than the system shown on the plans No special reason, just wanted to do something a little different. The elevator pushrod length must be determined and installed permanently at the horn, prior to covering. The rudder pushrod can be snaked through after the airplane is finished.

Covering: The framework got a few coats of sanding sealer, followed by sanding, then back to the basics of silk and dope for the final covering. I did not feel that the plastic type finish would do the airplane justice. Besides, I wanted to peel dope off the fingers once again. My choice was Royal Silron and Aero Gloss clear dope followed by acrylic lacquer for the color. Black fuel line was split and used for cockpit and windscreen. Much thinking went into the paint scheme. Who wants an everyday Pitts type finish! The result was as the pictures show (yellow, white with black pin stripe tape). quite impressive! Overall weight at this time with no gear was 6 lbs.

Engine: I went with a Kraft .61 plus a Tatone Manifold #EM-3 which allowed a scale type exhaust system out the bottom of the cowl. A 12 oz round fuel tank installation did not crowd anything in the front end. Access holes were drilled in the cowl for the needle valve and glow plug. There is more than enough room for any size .60 engine.

Radio: Radio room is more than enough. In fact, you could install a back-up system if you so desired, honest! It was a pleasure to work on a scale airplane with that much room. Figure on a lot of foam around the receiver and battery pack, as there is a lot of space up there. I used a Kraft Series 75-7B radio with KPS-14 servos. All were installed in trays as per the manufacturer's instructions.

Flying: So here we have a good looking airplane and pilot (?) but are they worth a darn? Yes, to both! The extra 5 in or so over the standard Pitts make this model a lot easier to fly (yes, I've flown the one-holer). Not at all sensitive on the elevator, if the CG is as shown on the plans. Ground handling is good to excellent. Not like a pattern type airplane, it is honest and predictable in the air and especially so on landing.

Conclusion: While this kit shouldn't be suggested as your first R/C project, it is a snap after you have a bit of experience. Royal is to be commended as this kit is excellent as is the complete Royal line. Try a two-holer. We think you will like it and it is more fun with a two holer!" 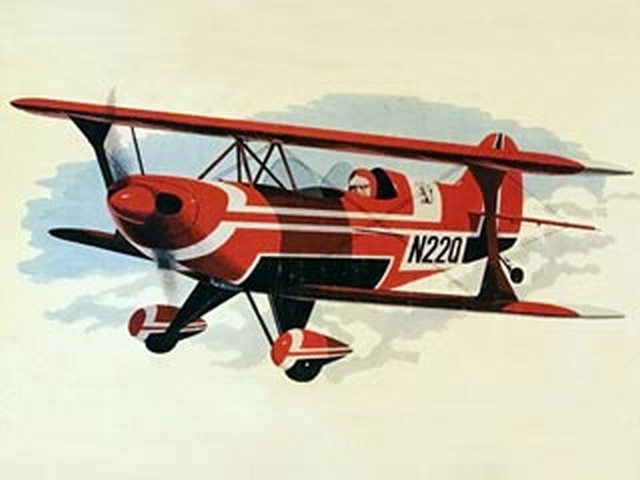