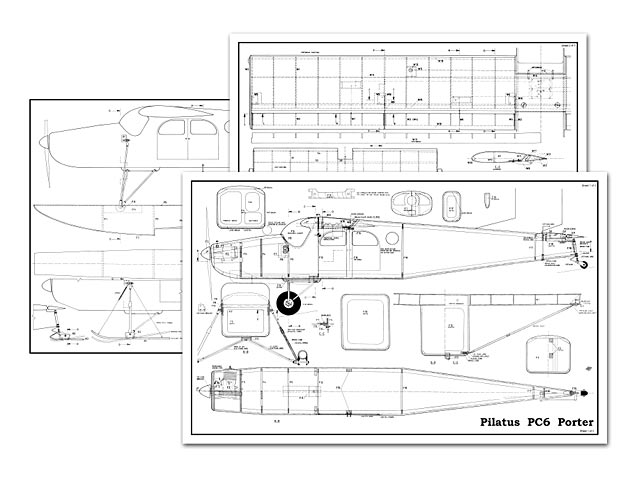 Quote: "For some time now, Telaves Model Engineering, composed of Bernhard, Gerd and Berni Huber, have talked about building a scale model of the Swiss-built Pilatus Porter. In these discussions we wondered if it would be possible for the model to duplicate the STOL characteristics of the real air-craft. To our pleasure, we found the model in flight much the same as the real Porter.

The Pilatus Porter PC-6 is manufactured at Stans, Switzerland, by the Pilatus Aircraft Company, Ltd., in the following versions:

Stans is at the foot of the Pilatus Peak, near Lucerne, and the company so named after that mountain. Over 160 Porter aircraft have been manufactured in Switzerland and some additional 45 Porters were built in America.

The Porter may be considered as a special plane, used where the 'average' aircraft have no chance to take off and land. The Porter has extremely short take-off and landing characteristics, and even more so with the new Turboprop engines. It is likened to an 'Air-Jeep'; because of its usefulness. The useful load of this aircraft is more than its empty weight, testifying to its good performance.

The Porter was designed as a multi-purpose plane and as it may be used with wheels, skis and floats, it fills the need as a transport at high altitudes, a photographic plane, for agriculture and for other special purposes. It has flown to Alaska, Canada, Asia, Japan, Australia and from the Antarctic to Nor-way. One was flown by a lone pilot to Australia, over open sea, mountains and deserts, through the Middle East, Pakistan, India, down through Singapore and Indonesia to Darwin and finally the length of Australia to Mel-bourne. This 14,000 mile trip, in 16 stages, took only two weeks. Such is the nature of the full size Pilatus Porter.

Before detailing the aircraft, we would like to define the term STOL. It is the abbreviation for 'Short Take Off and Landing'. Aircraft with a STOL classification and perform jobs that cannot be handled by a conventional plane, and for which a helicopter or VTOL aircraft are not necessary or too expensive. To obtain STOL characteristics the following is required:

Only the right combination of all three factors will give a perfect STOL aircraft. Some modern R/C stunt models with a power-to-weight ratio of over 1/1 may be considered as STOL models! However, the correct use of flaps is the main feature of an STOL aircraft. In the plans we see that the flaps extend over one half of the entire wing span (inner half). Section G-G shows the flaps of the original aircraft. Just below (Section H-H) is the flap cross-section used on the pro-totype model. The original aircraft used a spoiler to divert the air to prevent the flap from stalling (See sketch #3) at high angles. This is not necessary with the model because the flight is at a much lower Reynolds number. Minimum speed is limited by the crit-ical Reynolds-number and not by the maximum lift produceable, when 'double flaps' were used.

The experiments with our prototype proved the theory to be correct. In addition, the maximum flap angle used by the full size aircraft is only 38°. Our flaps are capable of 38°deflection. Another advantage in not trying to incorporate the 'double flap' is that the aileron and flap construction are identical, thus producing a simple, rectangular wing..."

Quote: "Here's one more from Uncle Willies. Years ago, back about 1972, I had an original copy of this plan out of Germany. Drawn by B. Huber and sold through FMT as I recall. Unfortunately, during a move it and so many more 'fell off the truck' in transit. Well, we all know what that phrase really means. Anyway, these files were available through Uncle Willie for a short time so I snagged a set. Of particular interest to me were the functioning landing gear and LE slatted flaps. Considerable effort went into the drawings... Cheers,"

Update 14/10/2017: added build instructions (in German), thanks to BerndLangner.

Instructions (in German).
Article in English. 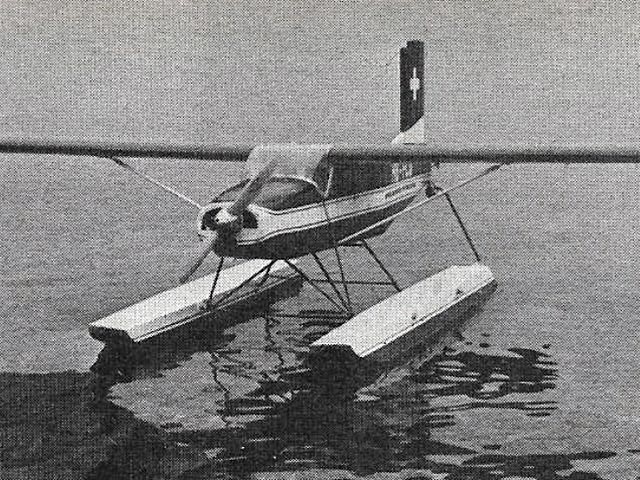 This is the biggest plan of the old model Porter I could find. Studying the plan I found there are nearly any former sin the aft part of the plane, making me wonder wether the whole construction is strong enough to fly? Same goes for the main spar (W13) the wing. This is just balsa, can that actually hold a 75'' wing in flight? Anyone who actually build this plane, please drop a line. I'm curious to find out how the plane is holding!
Dan - 07/12/2021
Hi Dan, if it worked for the designer then it can't be all bad, however, there's no law against modifying a plan if one's not happy with it. I accept that the fuselage backside is potentially weak in torsion, which is an uncommon feature in other backsides I know, so you might want to add a couple of formers. I wouldn't do those in ply, just pairs of uprights and crossbeams in 3mm balsa would do it in a sort of orange crate construction style for lightness and strength.
Regarding spars, W-13 is not THE spar, the structural equivalent of the spar is the entire upper and lower wing sheeting, W-13 being the spar web only. Think of an I-beam with very wide flanges and a web in the middle. The wing ribs help by stiffening the flanges (the wing sheeting). Basically, this is what is called stressed skin construction.
I doubt I'd change anything here as adding secondary members would add weight and complication for no appreciable benefit.
Miguel - 07/12/2021
Hello Dan. As I was about to give you my "2 cents" worth regarding your concerns, I saw and read Miguel's reply. I feel he pretty much nailed it, so I'll just say that I second his opinion.
I'll just add the following; Bernie Huber was (is?) a well known and very knowledgable/experienced modeler, so I would not find myself second guessing the "engineering" of this model, especially since its obvious from the article that the model was flown even from water and stayed in one piece.
RC Yeager - 07/12/2021
Hi Gents, Thank you very much for your vision and motivation on the plan! I started the hobby of building just 2 years ago, and have lots to learn (as so I did today!). With you help today I feel more confident and thus more determined to start this project. Thanks again!
Dan - 07/12/2021
Hi Dan, I hope I won't be trespassing on RC Yeager's feelings if I say we're always glad to help..It is even much better when one receives such a gracious thank you as yours is :-) I wish you many happy landings, and if some are not so happy then fix what´s broken, figure out why it happened, and get back up there!
We'll be hanging about for the bad advice as usual :-)
Miguel - 07/12/2021
Add a comment