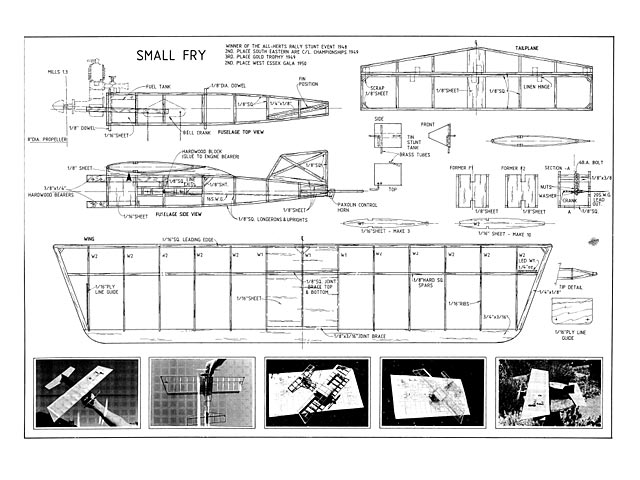 This here is a much later reprint of the plan, as published in Aviation Modeller International, October 1996.

Ron, as he explains, designed the 'Small Fry' in 1947 and went on to win the control line stunt contest at the All Herts Rally held at Radlett - the old Handley Page aerodrome. It proved that small, modestly powered control line stunt models could hold their own against the larger, louder, more powerful American designs, at least with the then existing SMAE stunt schedule. From the success of the 'Small Fry', Ron went on to design a larger version, the Big Fry (oz10958) and we hope to be featuring this model in AMI at a later date.

Here is Ron's description of the model's birth, followed by the original instructions:

I started to fly control line models in 1947, after I had saved enough money to buy a Mills 1.3 and a Keil Kraft Phantom kit. Inevitably there were many crashes during the initial learning stage, but I soon became reasonably proficient and wanted to learn how to fly aerobatics.

I joined the West Essex Club, which at that time, was the top control line club in the country and with a lot of help from the 'experts', I quickly picked up the rudiments of stunt flying and practiced for hours at the old wartime airfield at Fairlop to perfect my skills.

Watching Dennis Allen, Sid Sutherland, Bill (Funf) Taylor and other members flying the large, very light, Super Cyclone and Ohlsson 60 spark ignition powered models, it had soon become obvious that my Mills 1.3 models were underpowered and had too high a wing loading to perform well. I decided to draw up an aeroplane based upon the typical lightweight West Essex 10cc club model, but scaled down to 28 inch wingspan and using rubber model construction, and so Small Fry was born.

It proved successful right from the start and placed in many competitions. Later, it was adapted to take the new and very powerful Elfin 1.8, which proved to be an ideal combination.

FUSELAGE Choose very hard 1/8 sq balsa for the fuselage framework. Cut the wing and tailplane mounts (M1 and M2) from medium 1/8 sq sheet. Build two sides flat on the plan in the usual way. When dry, lift up and insert the F1-F3 formers - followed by the cross-pieces. Now glue the 3/8 by 1/4 hardwood engine bearers in with Durofix. When thy, drill holes in the bearers to take a piece of 16-gauge pianowire (pivot point). Hold the control plate in position and push the wire through the bearers. Add the wing fixing peg behind the wing trailing edge.

WEDGE TANK The stunt tank is detailed on the plan and built up from celluloid sheet - using cement to join the edges. Build this component carefully and check for leaks before installing it in the model. The tank is positioned between F1 and F2. The edge of the wedge should be on a level with the needle valve. THIS IS IMPORTANT

TAIL SURFACES The tail surfaces are built from 1/8 sq balsa. The tailplane features a central brace of medium 1/8 sheet. The control horn (H) is cut from 1/16 ply and notched into the elevator. Cement the fin in position after it and the fuselage have been covered. Cut the hinges from linen tape..." 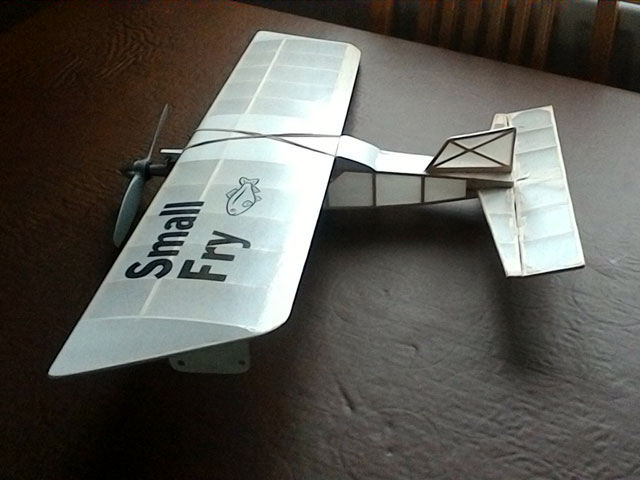 Hi Steve, I built this model back in high school, probably 1951 or '52. Can't remember what motor, could have been a Frog 150. Made a colossal noise with the modelspan covered fuselage drumming. I think it had a celluloid fuel tank. Didn't last long, typical of my models in those days. Thanks for this wonderful repository of memories.
DickEverett - 10/10/2017
Here are a couple of photos of c/l models built when I first discovered OZ, some time ago now [model photo & morepics 003; also Alphacon oz4609]. Both models won the Sam 35 Fireball Trophy about two years apart if I remember correctly. Trophy sitting next to the Small Fry. Thanks for all your hard work on our behalf.
TrevorT - 21/01/2019
Add a comment