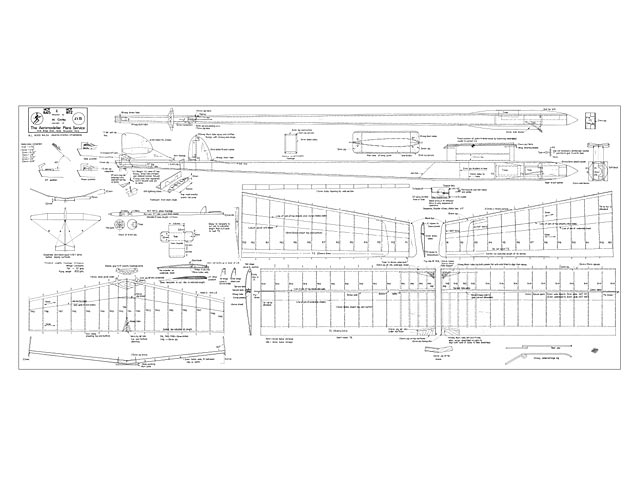 Quote: "These are the models that gave me my first British Team place in a power class, going on to max out at the World Champs, max out and win the Pierre Trebod International, and win the 1977 British Nationals. Until this year I suppose I was a glider flyer, although years of combat flying have taught me how to handle engines, and get those all-important first flick starts. So any model that can be built and trimmed at the last moment to produce such scores must make it the ideal choice for anyone who always fancied a "hot" FAI power model, yet felt it too difficult. I do not get much spare time for building, and therefore, most of the design decisions were based on the easiest, rather than theoretically the best, solution...
Hot Rats was drawn up in 1975 along the Danish triple-fin layout favoured by Koster, using details from the Phil Ireland and Ken Faux stables. Not wishing to 'plant' my precious model, I aimed for accuracy and consistency by keying all moving and non-moving surfaces, and wishing to build only the airframe, I chose to buy-in standard hardware such as Collins pans, Burrows G.F. fuselage tube, Kretschmer props, Screen brakes and Seelig timer. That's half the model for a start! Wing sections were flat bottomed hence no jigs required. Construction was all balsa, needing no advanced techniques. No machine shop facilities were needed - just a simple file and hacksaw for two parts. No glass fibre work because it is too messy and covering is by simple, heat-shrink plastic film - iron it on and go straight. out and fly it! I just could not bear the thought of the weight of all that dope, soaking into those acres of sheet balsa. The original Hot Rats '75 was envisaged as my FIC trainer - well it taught me to fly, using a Super Tigre engine and balsa fuselage. The same model was later fitted with a Rossi to deal with the new 7 second motor run rule, and later fitted with a glass fuselage for the Trials. The weight by now was 910 grams -160 grams overweight ! Yet that was the only model I had for the Trials, and it got me the team place. The two recent Hot Ritz '77 models had more wing area; knowing that I still would not be able to build it down to weight, at least I could keep the wing loading low."

Article pages, thanks to Algy2. 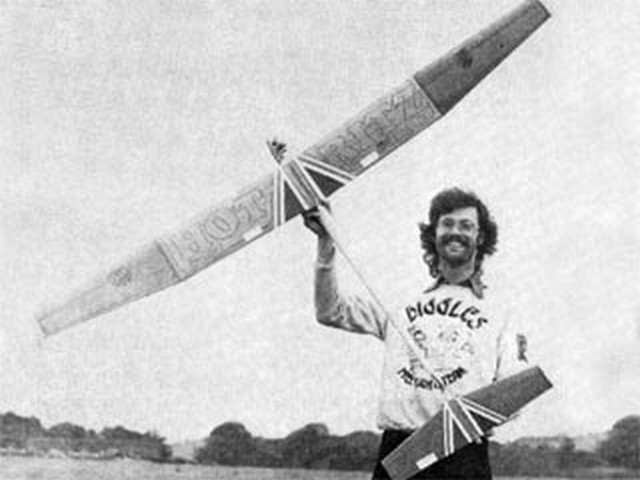