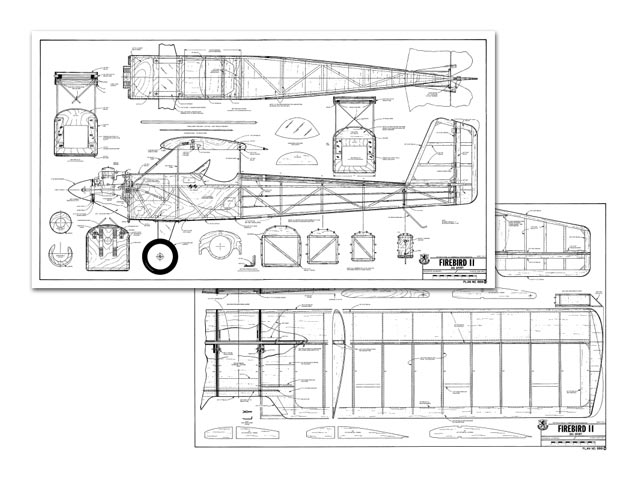 Quote: "The Firebird II is a two times larger version of the original Firebird (oz6747) from RCM, June 1981. Powered by a good .61 engine, the Firebird II with two sets of wings, can match whatever type of flying you enjoy.

Firebird II is a big airplane. In fact it is twice as big as the original Firebird which was the subject of my 'design and build' article in the June 1981 RCM. All dimensions of the original have been substantially doubled giving Firebird 2 a wingspan of 100in or 60in or anything in-between which the builder chooses. Like the first Firebird, this airplane is a mixture of the characteristics of the Heath Parasol, the Corbins, the Pietenpol Sky Camper, Sky Scout, etc. Based on those airplanes, the 100in wing is approximately 1/3 scale and a 75in wing would be 1/4 scale.

Using the 100in wing, the airplane flies nicely between 20 and 25 mph. Remembering that the full scale airplanes cruised at between 60 and 75 mph, Firebird II can be flown at exactly scale speed. Ofcourse this is a slow cruise. With the K & B .61 engine used in the prototype, and the 100 in wing, the airplane has been timed at 44 mph at full throttle and will do 58.mph with the 75 in wing.

To try to overcome the transportation problems and tedious assembly at the flying field associated with most 1/4 scale or larger models, Firebird II has been designed with a quickly demountable wing as in the case of the original. Assembly can be accomplished in less than one minute after arrival at the flying site. Disassembly can be achieved equally fast. The longest job seems to be wiping the castor oil off the stabilizer. Note the easily removed stabilizer and landing gear which make packing for shipping pretty convenient.

Because the airplane is light (160 oz empty) and the wing loading is relatively low for a large airplane, the .61 CID engine has more than enough power with the wings tested. It should be entirely adequate even with a 60 in wing. Based on flight testing, the writer would not hesitate to use a .40 in all but the shortest wing versions. So if you would like a versatile, low cost, easy to build, easy to transport, big airplane why not build Firebird II.

The construction of Firebird II is conventional and relatively simple throughout. All parts and materials can be bought at the local hobby shop or hardware store with the exception of the wing carry-through bar..." 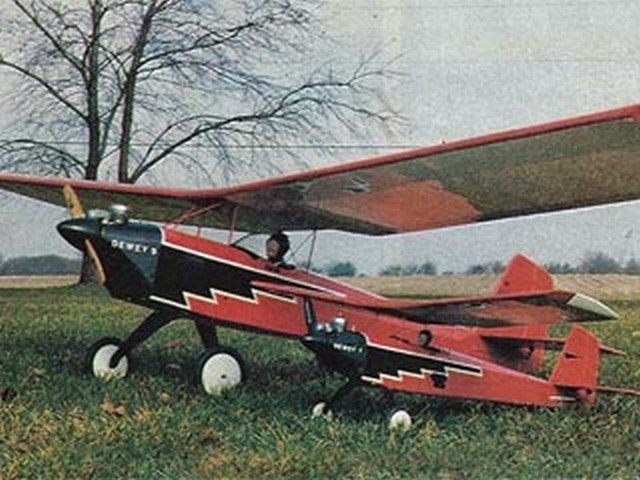