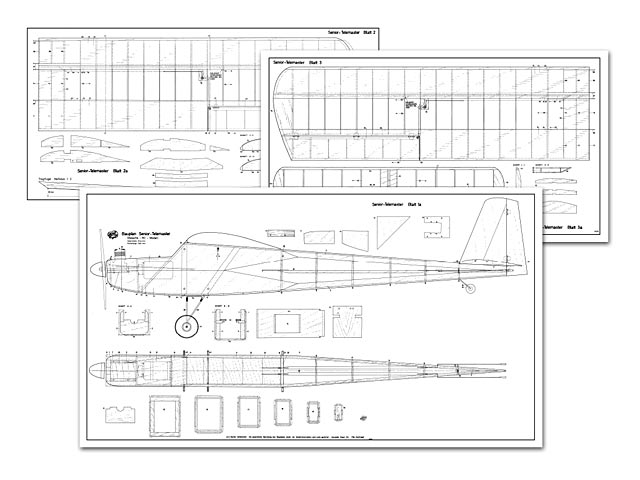 This is the original German version of the Senior Telemaster design from Alexander Engel KG circa 1970, complete with barn-door ailerons. For the later version, see RCM Senior Telemaster (oz5044) from 1975 using different construction methods including strip ailerons.

Quote: "Senior Telemaster has been developed especially for the fans of big model airplanes, and due to its high inherent stability and docile flight characteristics it facilitates proceeding directly from free-flight sport models to multi R/C flying. All controls and the throttle are provided for actuation. If for some reason the ailerons are not used, the dihedral should be increased from 65 to 130 mm (2-9/16 to 5-1/8 inches) to provide sufficient lateral stability.

Due to its high-lift wing airfoil, the Senior Telemaster is very well suited for special tasks like banner tow, leaflet and parachute dropping, aerial photography, etc., but it is suited for rather simple aerobatic patterns.

Building the Fuselage: Cut sheet 1 of the plan along the dashed line and glue the parts together so you have the complete fuselage views in one piece.

Now drill through the engine bearer bars 9 and glue a M3 (metric thread, about 1/8” diameter) nut under each drilled hole using epoxy. Drill the holes in the formers 12, 14, and 20, which are lead-throughs for the fuel tube, the throttle Bowden cable, and the tail wheel mount, and in former 14 make the cut-out for the tank.

Now assemble formers 15 to 20 and bind and glue the tail wheel mount to the back of former 20.

Subsequently, raise the end of the right fuselage side by 52 mm (2.05”) and in this position, glue the ends of both fuselage halves together. Insert formers 16 to 20 and glue on the nine fuselage bottom pieces 22 and the landing gear rest 23.

Now the fuselage is carefully trimmed (fettled) and all edges, except the wing and tail saddles and the landing gear rest, are well rounded..."

Scan from Bernd57, cleanup by rchopper56. 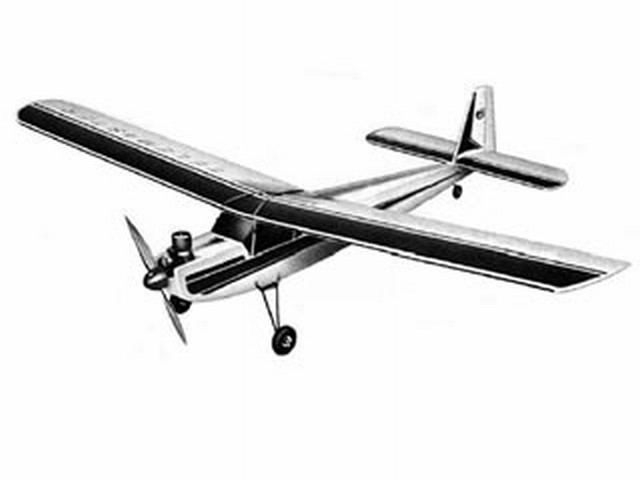