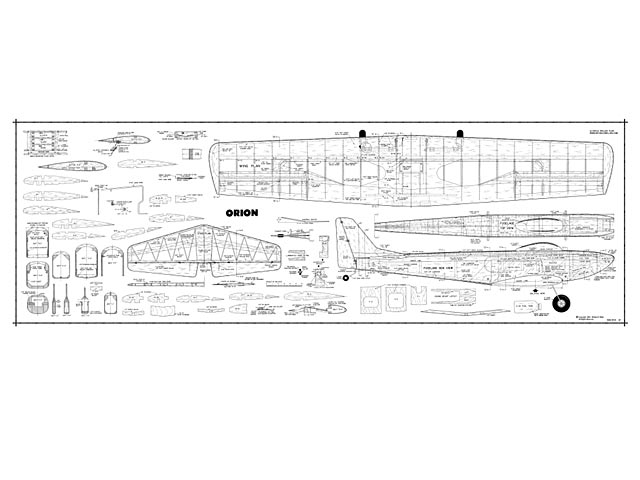 Quote: "editor's Note - MAN has not published a contest multi-control RC design since the Astro Hog in April 1958. The 'Astro' has been so widely accepted as the airplane for this event that, until now, no equal, or better, ship has been available. In capable hands, the Orion achieves a new standard of high performance. Its designer, Ed Kazrnirski modestly makes no claim that the Orion is a better airplane. In MAN'S opinion, the Orion is the best multi offered to date. But remember that we, not Ed, said that!

The Orion, like any airplane design, is one answer to a problem. The problem, in this case, was the need for a ship capable of more nearly perfect maneuvers. Through 1959, I had flown the Astro Hog (oz4756) design, but with various modifications to improve maneuvers. But it takes more than an Astro to beat an Astro. While it is always possible to cite areas of possible improvement in any design, it is not possible to off-handedly put a design on paper that would achieve these improvements, especially when the existing design is conceded everywhere to be the airplane for multi competition.

A list of performance standards must first be established. By studying our own past contest experiences, certain weaknesses, which occurred during various maneuvers with our past ships, were evident. Mainly, it was decided that a good contest ship had to be smooth flying at all times.

Keeping all of these things in mind, an entirely new design was worked out. The ship then went through a development period of about five months. During this time we worked on everything we felt would increase the performance of the ship. This resulted in much flight testing, working with moments, center of gravity locations, and wing and stabilizer areas. A good design involves a lot of compromises.

For a long time, we felt that the stab, being mounted on the bottom of the fuselage in line with the wing wash caused some problems in certain flight attitudes. Even in dead calm evening air, we noticed some buffeting in last year's ship. This we thought was caused by wing wash over the stab. The new design has the stab mounted well above this area, plus being trimmed to fly tail high in level flight. This high stab location does appear to give an improvement in smoother flight.

Since ailerons are used a good part of the time, any improvement made here would be a big help. We went out to the local airport with a pad and made sketches of the many different types of hinging arrangements found on full-scale aircraft..."

Note this here is the Orion as it appeared in MAN. For the Top Flite Orion kit plan (and manual) see Orion (oz13822). 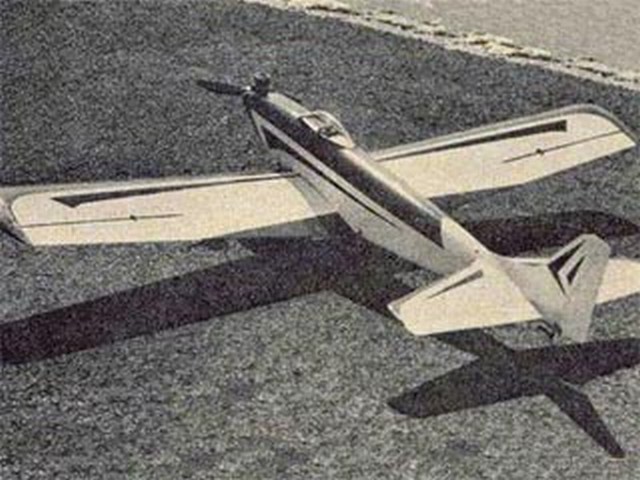 Hi Steve & Mary - This photo may be of historical interest [more pics 003]. I took it at RAF Gaydon in the early '60s. I was a teenager with a Box Brownie camera at the time, so not the best quality photo in the world. I think it may have been the Ripmax demonstration team.
ChrisPinn - 20/04/2016
Orion was considered a piece of history, the father of all modern aerobatic rc planes. The evolution of this design ended in the famous world champ Taurus, still in use today for vintage F3A contest. It was kitted by Top Flite too (what else!) of which manual is attached - see Orion (oz13822).
Pit - 06/06/2017
Added more pics 004-006, taken from Model Aircraft Sept 1960, World Championships Report - thanks to Pit.
Mary - 06/06/2017
Add a comment