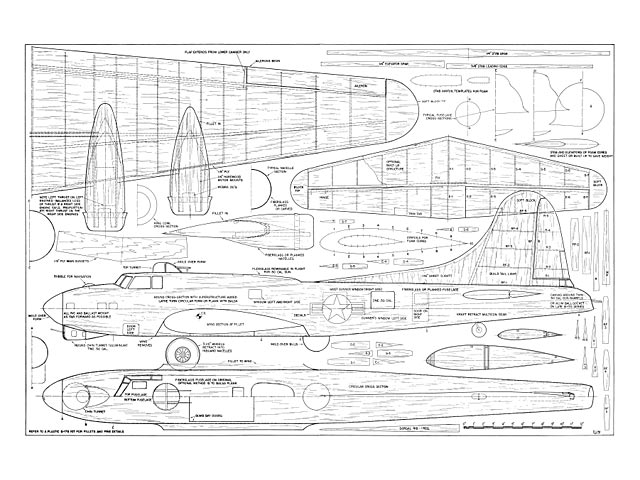 Quote: "Far overhead a quartet of matched engines drummed as the classic form of a Flying Fort droned overhead. England 1944? No, the NATS in 1972 and Tom Cook was on his way to Best Flying Achievement award. B-17G Flying Fortress, by Tom Cook.

The possibilities of the World War II Boeing B-17G Flying Fortress for R/C Scale has probably been evident to many Scale modelers for years. It is of course a somewhat complex undertaking, but if you are looking for a model that will stop the show at any contest, the immortal Fortress will handily do the job. The sound of the four engines roaring together in flight is a sensation you will not soon forget.

There are few Radio Scale aircraft around today that can outdo the B-17 in flight and in sheer beauty. A machine of war that earned the respect of all who knew her and of the nations it protected. It returned countless men to the safety of a runway when by rights the great bird should have fallen from the air. Thousands of them darkened the sky in the war years and it is not surprising then that the aircraft has become a classic among the great flying machines of a bygone age.

In model form, even the ground handling characteristics of the Fortress are extremely good, as compared to other military tail-draggers and biplane types, which all too often end up in that all too familiar position at the end of the runway. The low-slung and squatty stance of the aircraft makes it all but impossible for it to nose over on take-offs and landings.

Many, many drawings are available on the B-17, and a general layout arrangement can be obtained. This model followed such detailed 3-view drawings and was constructed perfectly to scale. The tail surfaces and wing area of the Flying Fortress were quite adequate in size as is, and their enlargement was unnecessary. Flying Models had a fine two-part feature on the B-17 in the July and August '70 issues. Profile Publications and Arco Publications also put out excellent books that cover the overall paint schemes and de-tails of the B-17. Model Craftsman Publi-cations offers 'B-17' and 'The Flying Forts.' Doubleday's 'Flying Fortress' by Edward Jablonski is another excellent reference book. And the 1/72 scale plastic kits available are a ready source of the fine and most hidden details. All in all, the amount of data available on this aircraft is astonishing and both fine details and a variety of color schemes are possible for the motivated modeler building this multi-engined machine.

In Flight. Flying the B-17 was all joy and surprisingly easy. Once properly trimmed out it flies smoothly on both calm and windy days, mainly because wind has little effect on large, heavy airplanes with fairly high wing loadings. Much has been said on loadings necessary for flight. I have heard some say that you can't fly successfully at over 40 ounces per square foot, but don't believe it! I have flown the B-17 at just a shade under 55 ounces per square foot. Even at this loading the model floats like a trainer with the flaps extended and takes off with or without flaps very easily. A tribute to the B-17's ability to fly was the 1st Place award at the 1972 Nationals for the best R/C Scale Flight Achievement.

Construction Technique. The construction of the B-17 is quite conventional throughout, and as this is a project for more advanced builders, a very detailed step by step sequence is not necessary. The methods of construction are meant only to serve as an aid to your building a sound and accurate Scale replica.

Make a very careful selection of the balsa required to do the job. Hardness is important as well as straight-grained pieces, devoid of warps. A good list or bill of materials will greatly aid in shortening the total hours required and will minimize the trips to the stores. Do endeavor to keep all weights down to a reasonable extent.

The Wing Assembly. The wing on the original B-17 presented here was constructed of styrofoam, covered by 1/16 balsa. If a built-up wing is preferred, a weight savings may be achieved. The tip and root rib may be used in the stack method for forming the ribs between. Make the tip and root ribs of 1/8 plywood. Determine the proper amount of wing taper and drill the appropriate holes on the centerlines of both plywood ribs. The stack is next carved down to provide an even taper from one plywood rib to the other. When you unbolt the stack, you should find an accurate set of ribs with which to build the wing.

I elected to use styrofoam for the wing panels for two basic reasons. First, for me, a styrofoam wing is usually much more accurate and warp free. Secondly, and probably the most important reason is that the process of mounting the nacelles into the wing is very important, because this determines the thrust angles of the engines. When cutting four slots into the wing to accept the nacelles you will find that the cores will stay more rigid and easier to work with than would a built-up wing..."

Scan from JJ, cleanup by rchopper56. 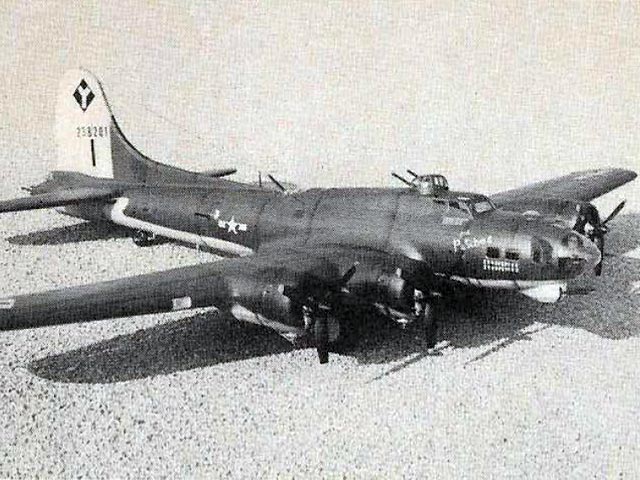