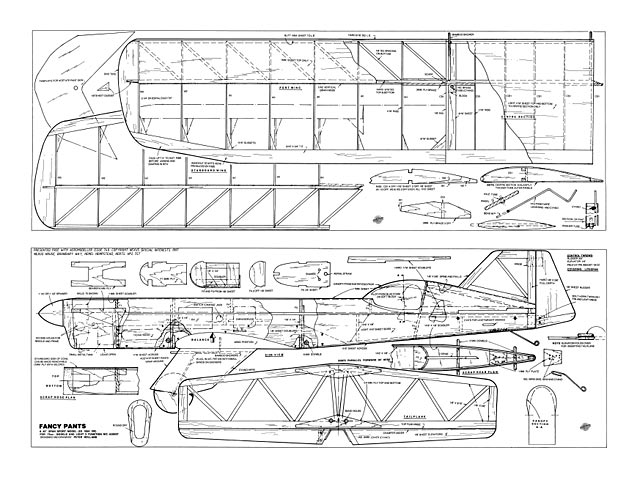 This low-winger started life free flight in the 1950s. Now it has been modified for radio, not because it needed to emulate the control line stunter which inspired the original, but to make it more practical for small field flying. Try this fascinating little flier for small engines for your next bit of balsa bashing. Peter explains how it came about.

In the 1950s, I designed a control-line stunter for my Frog 500 engine. It had a low wing of asymmetrical planform and a cockpit way, way back. Older modellers of the Apsley MFC might remember it as the 'Bookworm' Mk 2, successor to my earlier Elfin 1.8 and 149 stunters of that name. I had my leg pulled about that cockpit position, but then, I liked it there. After all, my legs had become so extended by this banter, that a successor to the design simply had to position the pilot there, to avoid his feet toasting on the engine!

So it was, that the fuselage and tail shapes became teamed with a higher aspect ratio wing. Clearly it needed dihedral in its new F/F guise, and
the flat centre section allowed me to have an easy to arrange seating under the fuselage, and simple undercarriage legs at the dihedral breaks.

In order to fit easily into the model box (carried on a bike), the legs were removable and faired with large trousers, in the style of the Chilton DW1. These helped to steady them.

So now you have the model just as it was, in outline, some 45 years earlier. At one stage, I remember, I used a Mills 13, which gave it rather too much urge, so changed to an Mica .87, and later to the Mills .75, for a sedate burble around.

The new version has a lightened fuselage where there is just room for a pair of Diamond D3000 servos side by side.The flying weight, with radio and Litespan covering, is 18 ounces - only a couple more than the doped heavyweight Modelspan covered F/F version. The Mills .75 I have now had a bit of a struggle to power a Whitman Tailwind, using the same radio, but the wing of that model is much smaller, so the loading is higher.

In flight, the thrust line is almost through the CG, and on the centre of drag, and the cockpit bulge provides a slight drogue effect for directional stability, rather like the tail end fuselage pod that I saw on Arrne Ella's winning A2 glider, while flying in the 1951 World Championships.

Those fancy pants give low side area, and the dihedral gives docile rudder response. The elevators, so much smaller than the C/L version, are more for trim than aerobatics, and the airspeed is comfortably moderate. Just the thing for relaxing in a small area, without making an annoying racket - Give it a go!

FUSELAGE: Cut a pair of fuselage sides from light 1/16 sheet, add 1/8 sheet doublers and two sets of uprights at F2 and F3 former positions. This integrates them firmly. Add 1/16 x 1/8 medium strip top and bottom to make a thicker joint at the bot-tom and facilitate joining the turtle deck. Glue in the 1/16 x 1/8 vertical stiffeners.

Mark out the 6 mm ply bearer plate for the engine of your choice, allowing 1.5 degrees right thrust. Fit it to F1, which is 3 mm. ply, and add the 0.8 mm. ply gussets.

Assemble F2 and F3 from strips of medium 1/8 sheet and cut the other formers from same. Now glue the sides to the bearer assembly, check-ing for 2 degrees downthrust, and follow up with F2 and F3. This keeps the fuselage rigid until set While the glue is drying, build the fin integral with a spine strip (you will see why, in a moment).

Now bring the tail end together to meet the fin trailing edge, clamp with a clothes peg and glue in F5 slanted back, and fitted to the spine to position the fin correctly. Add the two F4 formers and dou-bler strips that will support the skin above the tailplane slot.

Install the snakes and aerial straw, then sheet across the bottom. Let the straw exit forward of the skid position, then sew the skid to its ply plate and incorporate it in the bottom sheeting. You now have a rigid fuselage. Drill and insert the dowels for the wing and tail bands.

Make the cowl front, and shape the inside to clear the temporarily positioned engine. Fuel proof the engine bay with fast epoxy. Mount the engine, and add a curved doubler layer of 1 mm sheet over it Epoxy the inner face of this while doing so.

Apply the 1 mm sheet turtle decking the full length up to F5, then trim back to leave a cockpit. Pin and glue more 1 mm sheet aft, onto the spine, and against the fin. Trim to form the tailplane slot. Note that there is a recess to allow the tailplane to be inserted with its elevator folded right over.

If you can gain enough access to the engine from the open bottom of the cowling, leave it so, but extra access via the starboard side can be had by replacing the balsa with a removable panel of heat bent 0.8 ram ply held on with two scraps of Velcro.The prototype has a couple of pieces of ply inside to slide over the bearer bracket, and a removable peg to retain it - much will depend on the engine that you use..."

Update 17/01/2019: Added model photo courtesy of AlphaWhisky, with many thanks. This photo is from his RCGroups build thread at Fancy Pants for OZno P which was part of the 2018 'Outerzone No Picture' (OZNoP) build-off organised by BMatthews, see RCGroups thread at https://www.rcgroups.com/forums/showthread.php?3111705-OZNoP-Outerzone-No-Picture-Build-2018 for more details. 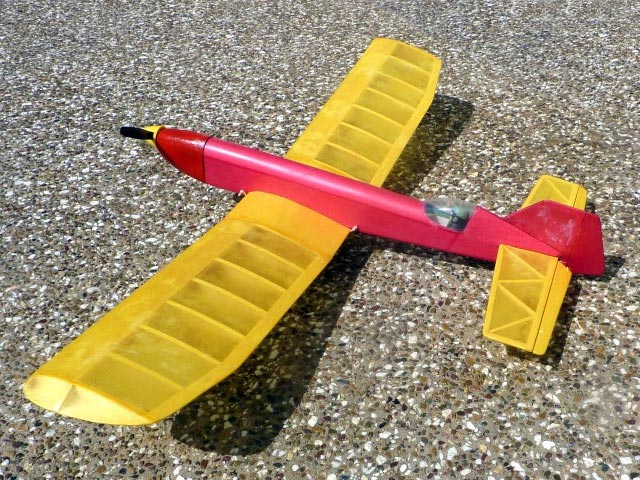