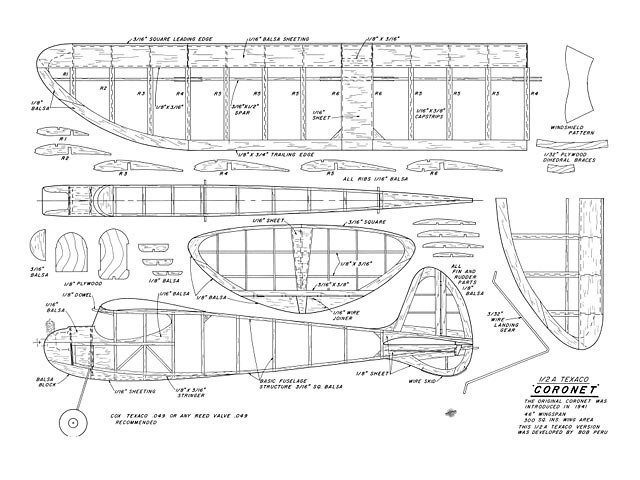 The original Scientific Coronet (oz7482) was first published in 1941. This is a later version for R/C assist.

Quote: "With a little rework to it nose, a classic returns in its original size. It's competition capable but doubles as a great basic trainer or sport plane. 1/2A Texaco Coronet, By Dick Sarpolus.

Construction articles for Old Time F/F designed prior to December 1942 are appearing with regularity, especially for 1/2A Texaco SAM events. Why? Modelers are finding out what a fun event this is for competition, and the aircraft serve equally well for sport flying if competition is not your bag.

I know of several newcomers to the hobby using this type of aircraft as a basic trainer; with the exception of needing calm weather for flying, the .049 ships can do a good job in this role. They do require more effort to build than most of today's 'trainers' but they're low in cost and most are super easy to fly when set up for training. Small in size, they fit in any car and that economical engine burns a bare minimum of glow fuel.

Another sign of the 1/2A Texaco popularity is the availability of aircraft kits suitable for competition - or, again, for fun flying purposes. But even without a kit, scratchbuilding these designs usually isn't too bad; with their stick type construction, you may need to cut out little more than the wing ribs and a few fuselage bulkheads. If you're not used to this construction style or if you're a novice builder, it may be a bit frustrating at first. It does take a more delicate touch, and builds character. Relax, go slow, enjoy the work-bench time.

Because of the .049 engine called for and the minimum wing loading requirement of 8 ounces per square foot, experience has shown that around 300 square inches of wing area will result in a good performing airplane. To get a plane of this size, modelers select an eligible design they like and scale it down; most early free flights were considerably larger, using the .60 engines common at that time.

There are exceptions; the plane presented here, the Coronet, kitted by Scientific Models in the old days, is built to the exact original size. It was designed, back then, for the Class A and B engines. Class A had an upper limit of .19 cubic inches, and the upper Class B limit was .29. A .19 or larger engine in this small 46 inch wingspan, 300 square inch aircraft must have made it climb like a rocket; but with the weight of the engine and ignition system, I suspect the glide was not great.

Built today, an .049 in a plane of this size does a good job. So no scaling down of the original plans is necessary. For other SAM competition events, scaling down or up of an eligible design is also permitted. DB Mathews, well known Old Timer enthusiast, took the Coronet design and scaled it up 150%, to a 72-inch wingspan and 770 square inch wing area, for power by a .40 4-cycle or a .30 2-cycle engine. His version was pub-lished in the October 1988 issue of Model Aviation. A side note: the original price of the Scientific Coronet kit was $1.95!

Although no change in size from the original plane was required, and the exact outlines from a copy of the old plans were used, a few minor changes were made, as per-mitted by SAM rules, to adapt the design for 1/2A Texaco use and control by radio. Rudder and elevator control sections were added, within the original tail surface out-lines. Minimum changes to the structure were made. In the nose section, the heavy hardwood engine mounts needed for the Class A or B engines were eliminated; a 1/8 inch plywood firewall was added, positioned further forward to suit the Cox .049 engines.

Looking at many of these old freeflight designs, it's easy to see where 'improvements' could be made; changes to the construction along with some design changes would make many of them stronger, easier to build, more practical. But we've got to remember that when these aircraft were designed more than fifty years ago the modelers didn't have a large data base of proven, successful designs and techniques to draw from, as we do now. Those guys were really experimenting, both with construction methods and design approaches. Today, we're building and flying these designs for nostalgia and for fun, recreating the early classic modeling efforts.

Bob Peru, an active Old Timer competition flier, feels the Coronet would be very competitive in 1/2A Texaco. The smaller engine permits some lighter construction in the nose area as compared to the original, and with light radio gear the plane can be built to a light weight, around 16 ounces. I flew it for a while, and it sure does climb well; floats well too for some soaring fun. For sport flying and/or training use, I'd add more downthrust in the engine mounting..." 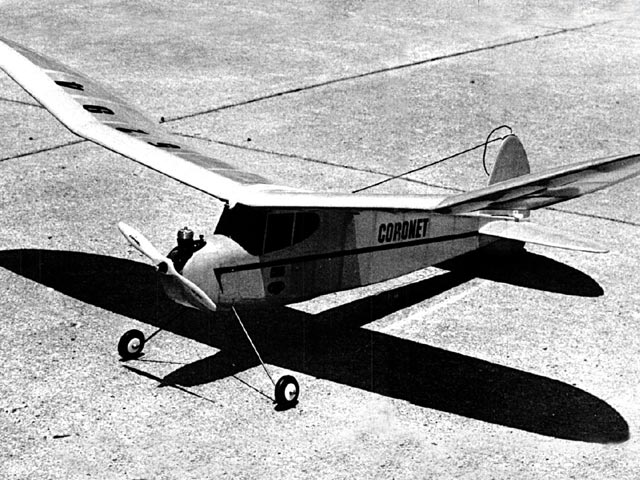