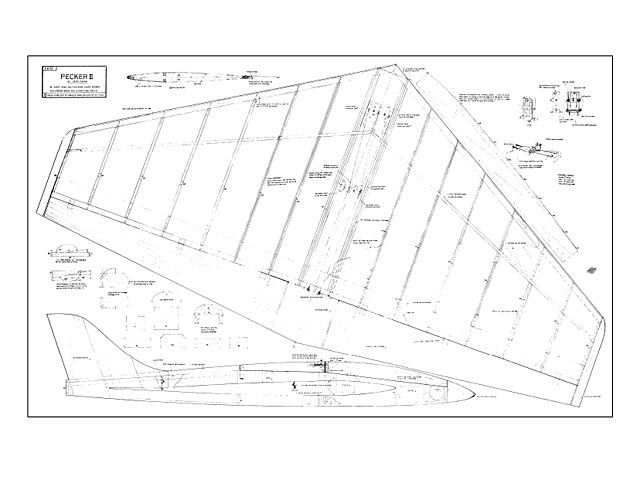 THE PECKER series began in the autumn of 1974 as a rough and ready version of Peter Russel's well known 363 (oz6215) powered delta design. Rough it was, too, and I imply no criticism of Pete's design when I say my Pecker I was pretty awful. I had 'improved' the published design in many ways, of course, so maybe the results were to be expected. It was terribly sluggish on elevator, very 'rolly' on rudder, wobbled about like a jelly when flown slowly - and sank out of the sky, whenever the wind dropped below gale force.

Why did he bother with it then? I hear you ask; well, the aileron response was marvellous, and the thing would roll and roll and roll - if you could first get enough height for the initial dive!

Pecker I then underwent major corrective surgery. An underbelly handhold, a canopy and a more rear-ward fin almost constituted a fuselage, and a much more rearward e.g. improved pitch control - but not very much. I was told that the sweep back angle was to blame for its woeful soaring performance, and I tried new wing tips with a Phantom style double sweep angle, but the soaring ability remained poor. By now, Pecker I was a scruffy heap, so Pecker II was drawn up. This was based on the planform of Delta Lady (oz10383) by Mike Trew of the Westbury club, but was altered to incorporate elevons, a new fuselage and all the lessons I had learned from Pecker I.

Pecker II was a winner from the start. Elevator response was more or less normal and aileron response was almost, but not quite, the equal of MkI. The rudder problem I had solved by dispensing with it, and the model soared away like a good 'un, I flew this model for several months and never bent it. In fact, I was so pleased with it that I decided to try and solve the few remaining problems.

Thus evolved Pecker III, which has a slightly greater span and area to make the best use of standard timber sizes, has a sleeker fuselage with more grab area underneath, and incorporates an improved mixer unit. It also makes use of a slightly unorthodox method of wing construction; this is simple, needs no jig for an all tapered wing, and produces a nice true structure.

Contrary to normal practice, I am going to give a detailed account of construction. It may make boring reading to the casual browser, but the structural design is a bit unusual and problems can arise if the correct sequence of operations is not followed.

Construction. Wing. Before starting actual construction, carefully cut and join the four leading edge sheets, from 1/16 x 4 in and cut and scarf join the trailing edge sheeting from 3 sheets of 1/16 x 2 in. There is little room for error here, so follow the plan and get it right... " 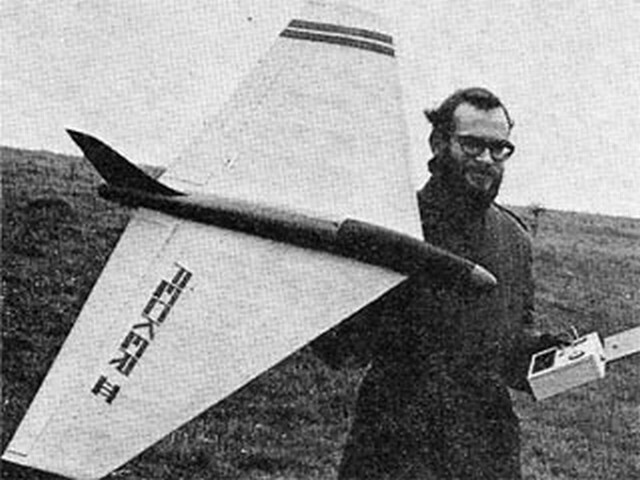