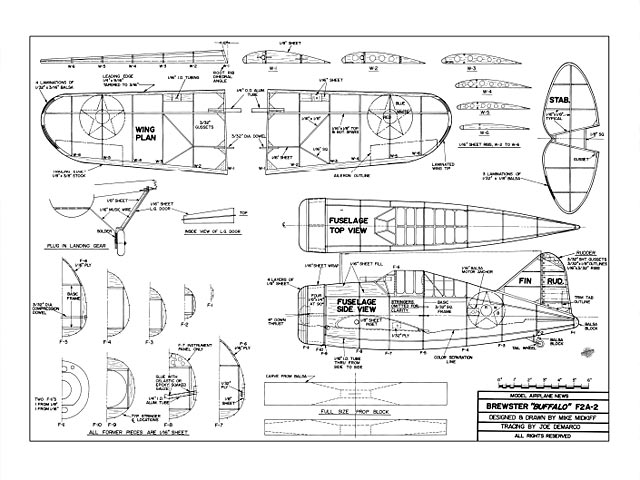 Those who attended last year's Flying Aces Nationals, held the weekend before the 1980 Nats, probably got as close to scale modeler's heaven as most of us will ever know. A collection of canards, twin-engine subjects, biplanes, a 4-motor Rus-
sian bomber, and a host of low-wing WW II ships, all rubber-powered, kept mouths agape in amazement as flight after flight went up under near perfect conditions.

One of the most popular and exciting events of each FAC contest is the WW II Scramble. The unique feature of this event is that, after initial qualifying flights, the fliers participate in a mass launch of all ships, carried out in several heats. The finals are held as a head-to-head confron-tation of the best-flying aircraft, all winners of previous heats.

Mike Midkiff, one of the 1978 finalists flying a Hellcat (oz3488), was this year's winner flying his new Brewster Buffalo F2A-2, an unusual and rarely modeled subject. Mike's 'Buffalo' was easily the crowd's favorite from first flights through the finals as its chubby profile and planform showed in definite contrast to the Focke-Wulfs and numerous Heinkels that filled the skies during each heat.

After coming so close to winning the previous WW II Scramble, only to lose to Pat Daily's Fiat G-50 (oz925), Mike decided to build something unusual for the 1980 meet. He opted for the Buffalo, even though it had bulky proportions and a stubby planform. Mike offset these seeming limitations by designing for a light wing-loading and reliable flight perfor-mance. The success of the project would not be argued by those who saw the Buffalo best its nearest competitors by a substantial margin in winning the 1980 Scramble. At 3.6 oz all-up weight, the design more than fulfilled Mike's hopes and expectations, particularly in light of its full-scale counterpart's history.

Unlike Mike's model, the original ship was not a clear winner. The Brewster Aircraft Company entered its XF2A-1 prototype in competition for the US Navy's carrier monoplane contract in 1936. Compared to its competitors, the Buffalo was original enough for the Navy to seriously consider, resulting in a contract for 54 of the aircraft. However, that award was the high point of the ship's career, for shortly afterward, carrier trials revealed bad land-ing gear problems. Additionally, the airplane could not be adapted to the new more powerful Pratt & Whitney engines, and performance suffered even more as armament and subsequent weight was added. The death knell of the Buffalo was sounded at Midway when 13 of the 19 ships of VMF-221 were lost to Japanese fighters and bombers. From that point on, the Buffalo, like its namesake of the plains, was almost extinct and served only in a training capacity.

Construction. Althoufg the fuselage is essentially circular in cross-section, it is still constructed in the time-honoured box fashion, with formers and stringers added over the 3/32 sq basic frame..." 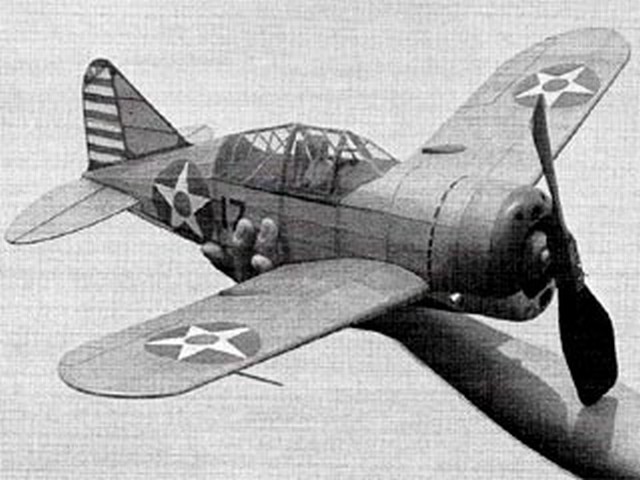