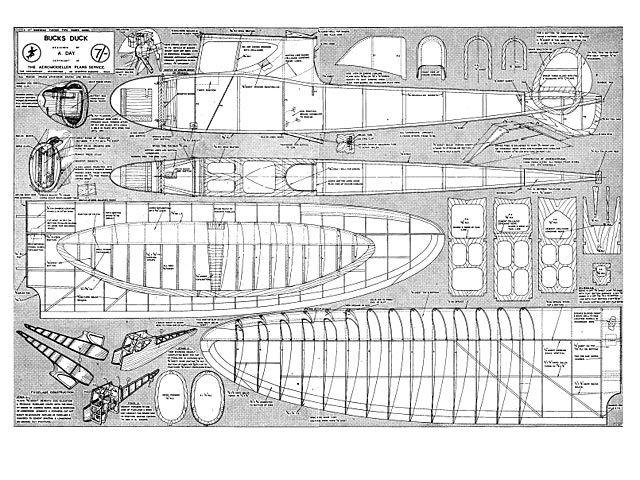 Quote: "MANY advantages of the pusher layout are obvious, but nevertheless this type has been almost universally neglected in the past. The advance of radio control however to a stage where it is likely to become universally popular has reawakened interest in this oldest of layouts, and there seems every likelihood of this type coming back into its own.

Buck's Duck, being a medium large machine with delightfully slow and stable flying characteristics, is an ideal model for radio control. The tremendously strong nose and rear mounted engine give an unequalled resistance to un-friendly earth, while the construction throughout is more than sufficiently robust to take care of all the ordinary mishaps a model meets with in its flying life. It is very easy to trim, and its leisurely pace is a pleasure to watch. The original model is now two years old, but despite the fact that it has been flying the whole of that time has few scars to display. Power in this case is supplied by a 7.5 cc Gerald Smith 'Redwing', but the model is suitable for any 5 to 10 cc petrol or glow-plug engine, or corresponding diesel. For radio control purposes, no doubt the petrol engine with its greater flexibility will be preferred at any rate as long as engine control is intended, but it should be stressed that Buck's Duck will make just as fine a model for free flight with any type of engine.

Generally, the design and construction are straightforward and are unlikely to present any difficulty to the ordinary builder. The design was based on Colonel Bowden's oft-advocated principles and in many respects this model has a family resemblance to the well known Bowden Contest. In detail, however, it is soon seen that there are considerable differences arising from the pusher layout and side area arrangements.

A word of warning perhaps regarding engines. Owing to the reversed action of the propeller trouble may be encountered with engines having slight taper on the crankshaft, as the taper shaft is pushed away from its bearing and allows oil to blow past and drown the spark points. This does not occur on the Redwing, but it would be as well to make sure of the point before installing a petrol engine.

The cabin on this model it will be noted is not celluloid covered in the usual fashion, but instead has a celluloid 'floor' which is curved up towards the engine to make an air duct for adequate cooling. This it does very well and no trouble has ever been experienced with over heating." 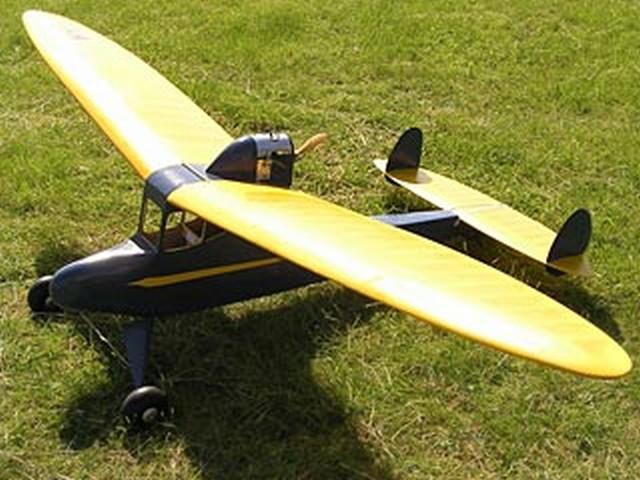