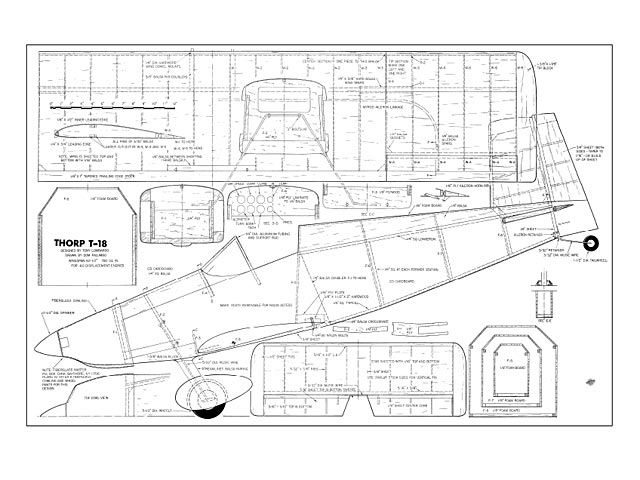 Quote: "The T-18's dimensions are perfect for a one quarter scale model of .60 powered proportion. A considerable margin on the weight is afforded by the generous 780 square inch wing, but we knew that we had better design as light a structure as possible because of the very large fuselage dimensions. This prompted the use of foam board for many of the detail parts, including the fuselage sides themselves. There are several deviations from exact scale which were introduced for practical reasons. The T-18's bubble canopy is immense, and a quarter scale version would have been a problem, so the turtledeck was modified slightly and an open cockpit used as on the earlier T-18's. There are no flaps on the model simply because they're not needed. The full scale aircraft uses a stabilator pivoted about the 40% chord line, and while this could have been incorporated without much trouble, a conventional stabilizer was used instead. The area of the model's stabilizer was increased by about 10% to accommodate for the inherently less efficient pitch control. The airfoil used for the wing is the popular G-436, which has a flat bottom and excellent low speed characteristics with a very gentle stall. All other dimensions and details were duplicated precisely, making this an ideal candidate for stand-off scale competition. Fligt performance also makes it an excellent intermediate low-wing design..." 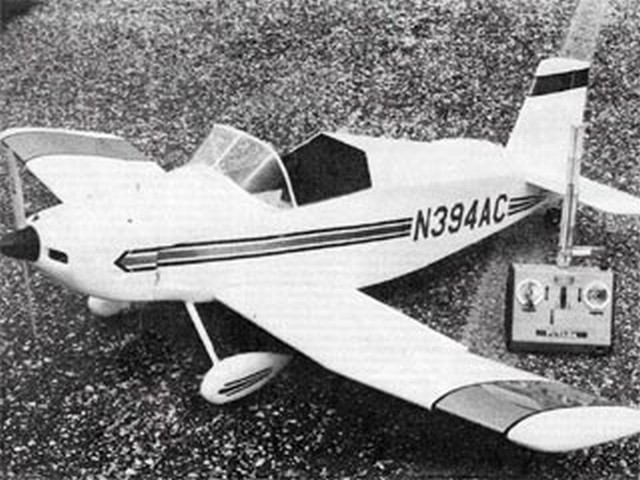