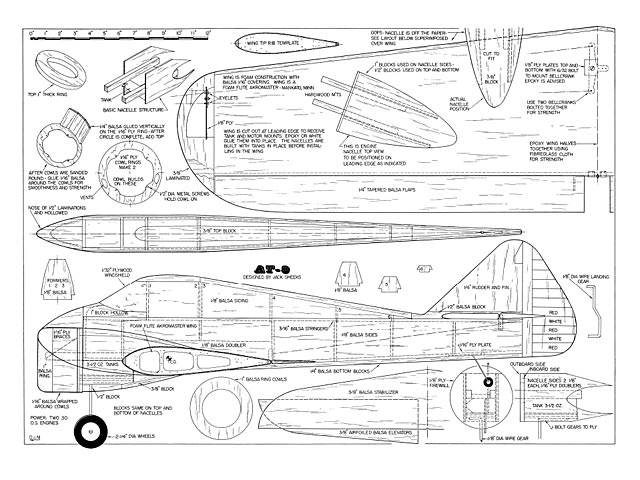 Quote: "There is something about a twin that's hard to resist, and dual .30's stuck out front will attract a lot of attention.

In order to get this whatever you wish to call it under way, we feel it only fair to give you a short run down on the ship modeled here. It was designed by the Curtis Wright Co as a twin engined fighter. The Air Force bought the design, but decided to use it as an advanced trainer as they had faster designs already in production. Thus the designation of AT-9. Most of the pilots trained on the AT-9 went on to become P-38 pilots, with a few going to bombers.

The AT-9 was the fastest trainer of WW-II with a speed of over 200 mph and a landing speed of 90 mph. The ship was nicknamed the 'Jeep' by the men who flew her and the name stuck. Probably because the ship was sturdy and could take a beating and still come up a winner. Many of the design features of the famous P-40 can be found in this ship and if there had been more powerful engines available at the time we feel it would have made a good fighter. As it was, it only had 300 hp Lycomings for power.

The model you see here is not scale, but could be called "stumble off" scale or some such designation. Who cares? The ship is different looking and turns in a respectful performance. Besides, isn't that what most modelers are looking for anyway? We had another twin stunter in 1964 called the 'Skyrocket' and we understand it still lives somewhere in the swamps of Florida. It was a ball entering it in Scale competition, doing our required laps for qualification, then going into the full stunt pattern. This brought the crowds to their feet. It also put the heat on the judges and we walked home with some mighty nice trophies and prizes.

To get the ship started we did a little bartering with Dennis 'the Menace' Duvall. He had a spare wing from Foam Flite that had been damaged in shipping. I think an anvil fell on it at the depot. We next made a secret trip to Hobby Craft for the best Sig wood in town. Why secret? Well it's not good to hit a working wife with what you have spent on your hobby all at one time. Some wives become violent over money you know. Besides, Doris, the owner of the model emporium lets me run a bill. This way you can pay it off little by little.

With all the goodies ready we got our less than new tools out and began construction of the ship. As work progressed we noticed regular visits from hawkeye Gary, so there would be no mind changing in the middle of the job. Before the dope was dry, we were receiving offers of free trips to the flying field with Pepsi's furnished. With the projected day of the test flight set, we thought we would witness other new craft make their first sorties. For once we might get a chance to give back a little harassment that we usually receive on first flights. Sweet revenge! However it was not to be as before we had finished with the ship, the wind was too much for the chicken hearts. What's 30 mph among friends?

It took a Couple of runs to set the engines as they only had three bench runs before be-ing installed. We're not sure it that's guts or stupidity but we had to go with what we had. So off to the church yard. While Jerry Caldwell pitted my ship, Jim Vornholt was busy trying to take pic-tures with a broken camera. We didn't know it was fractured at the time, so you will have to take our word for how the ship performed.

The flights were far better than we had expected. If you have ever seen Al Rabe's Sea Fury take off and land, then you will know how the AT-9 makes it. It gets up on its gear and tracks beautifully on the ground. When landing, it sets down with no bounces on the main gear and travels for at least half a circle before the tail touches down, You'll find it worth flying this bird just to see these two actions.

On the first flight the outboard engine gave up the ghost and quit (new engines). Jerry ran out in the circle yelling "don't do it." He thought I was going to continue the pattern on one engine. I actually wouldn't have tried it, but the ship pulled real fine on one mill and handled well enough to try it. Those OS .30's are strong for a small engine. We fired her up again and readjusted the needil valves, richer this time. It might be better off on muffler pressure for smooth-er runs. I hate to do it though, as we love the sound of two engines cranking on a little out of synch. Guess we'll have to get two more of Art Adamison's mufflers for it. He has the best mufflers going for my money.

The AT-9 has very good potential for becoming a competitive stunter. The ship is a little nose heavy, but this is a minor trim problem. Other than that, this ship has no bad tendancies. It pulls steadily on the lines in all poisitions, in fact if you turn those OS 30s on, you had better grab your socks and a tree stump, as she really pulls. All in all we feel you won't be disappointed if you build this aircraft, so if you're looking for something different and exciting, read on..." 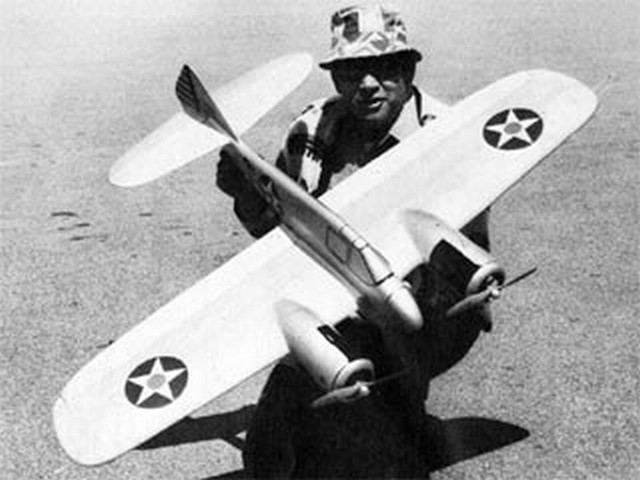