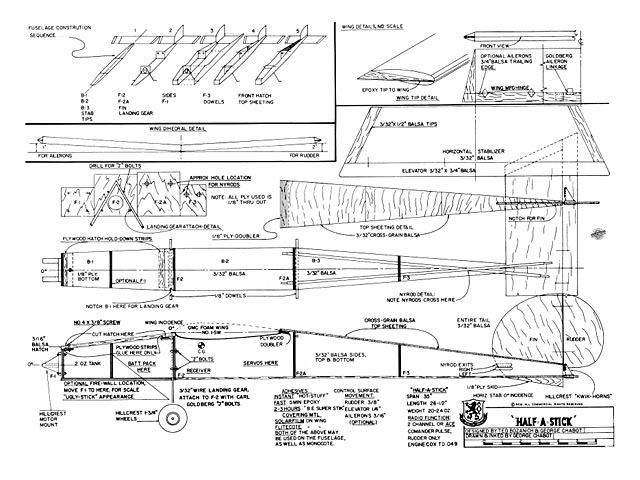 Note this plan and the Half-A Chaos (oz9211) both appeared together in the same RCM article, in July 1975.

Quote: "Two Half-A models designed with performance in mind. A hot, scaled down version of the popular Kaos (oz6251) and a Half-A Kwik Stik (oz6158). You can build them both in less time than it takes to lay up the wing on a sixty powered job. And once you put them through their paces, you'll have every guy at the field waiting his turn at the stick. By George Chabot and Ted Bozanich.

This is really a two-in-one article - featuring two Half-A aircraft with an ease of construction and a performance potential that will please the Sunday Flier or the guy who wants a quick building small aircraft that flies exactly like its .60 powered cousins - but at a far less expenditure of time and materials cost.

Half-A-Stik. The creation of the Half-A-Stik is the result of at least several minutes of deep thought. Having built several of the current Half-A designs, we wanted an airplane that would meet certain specifications. It must be a simple design, stable for a beginner, manueverable for the more experienced flier; a Sunday flyer; a pylon racer; and, above all, an airplane that Baron Von Thumbs could fly.

The big light flashed on - Ugly Stik! And so, after clearing the table of empty beer cans, glue bottles, balsa shavings, and over-flowing ashtrays, the Half-A-Stik emerged. Like all of its counterparts it fills all the requirements and then some. It requires less money, less radio, less engine, less gas, and less space to fly in. At this time in history it all adds up to beating the inflation game and still getting some stick time.

Unlike some of the other Half-A designs this airplane was built with ample room in the fuselage for the gas tank and radio. You can use a Cox .049 Medallion with the tank mount and an Ace pulse system for a minimum investment and enjoy hours of pleasure flying. If you've got the 'Bread,' or already have the equipment, you can use a 'brick' or mini-servos, a Cox TD .049, and put on an airshow that will keep the flying field talking for a few days!

We built two prototypes with the Kraft brick' and TD .049 engine. The first one used rudder and elevator, had lightening holes, spring steel landing gear, lightweight Williams Bros. wheels, and flew right off the drawing board at 21-1/2 ounces. The second plane used ailerdn and elevator, Hallco landing gear, heavier wheels, a brass.torque rod to the ailerons, and it flew off the board at 26 ounces. Both aircraft were very stable. The aileron version is capable of consecutive rolls for as long as you care to impress the spectators. The rudder and elevator version will do snaps, rudder rolls, spins, and ROG.

Some options if you are a doodler: cut lightening holes in the wings (but be careful how many G's you pull), scallop the trailing edge and elevator, try tricycle gear, steerable nose wheel, etc, etc. For maximum performance I recommend the Kim Kraft Cox TD .049 engine, pressure fuel system, Kim Kraft needle valve, and a balanced 6/3 grey Cox prop. By the way, we used Hot Stuff for all construction except on the foam wing...

Note this is a low resolution plan. Hopefully a clearer scan will surface at some point [Edit: better now]. Until then, for more detail see the supplement file, hogal's excellent PDFvector tracing. 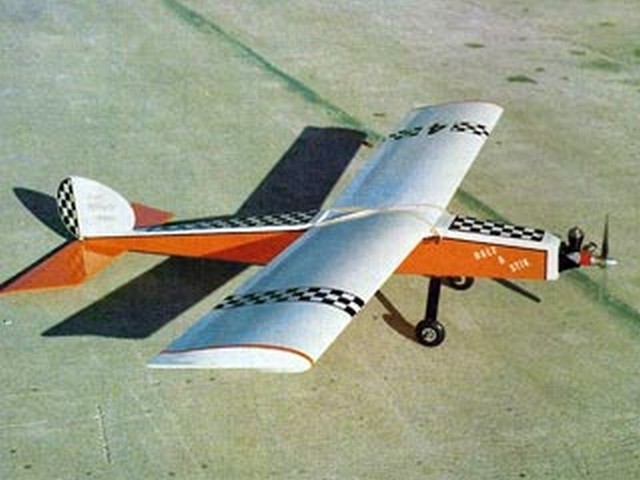