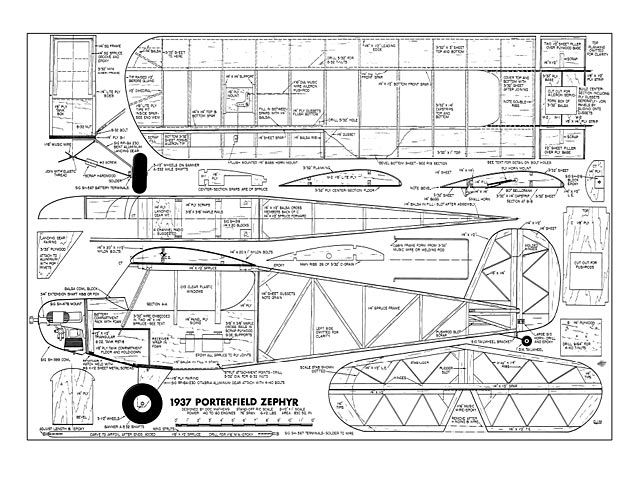 Quote: "Sometimes a fighter is too much and you need an easy old bird to tool around with. Here's one in keeping with developing skills for .40's to .60's

The Porterfield Zephyr was designed in 1937 by Noel Hockaday as an improved version of his earlier American Eaglet. Powered by a Continental 40 horse engine, the aircraft proved underpowered and sold poorly. Only 45 were built, even though the selling price was a modest $1355 FOF Kansas City, Kansas.

As an interesting sidelight, these aircraft were constructed in a factory at 25th and McGee, Kansas City, Missouri sharing space with another struggling young company called Hallmark Cards! If a truth can be derived from this it must be that it is more profitable to manufacture greeting cards than aircraft as the Porterfield Co. expired from a lack of interest in 1947. Hallmark on the other hand had sales in excess of 100 million in 1977.

I had purchased a book entitled 'History of Aviation in Greater Kansas City' many years ago, mainly since it contained a three-view and a photo of the Zephyr about which I had never heard. During the ensuing years the Zephyr lurked in the far reaches of my memory, cropping up occasionally as a subject worth modeling, but about which too little material was available to do it well.

About two years ago I asked a friend who had purchased the FAA registry computor readouts to check under Porterfield for a registered Zephyr. To my considerable surprise Chuck Lebrecht of Chicago had recently registered Zephyr NC 18743. I of course rushed a letter to Mr Lebrecht explaining my long interest and asking for his help, to which he most graciously complied.

Charles Lebrecht is President of the Por-terfield Club of America and has a fund of historical knowledge of the Porterfield Co. that is second to none. I would caution any contest scale builder that I have 12 color photos and an authenticated drawing of the Zephyr that I will provide at cost to avoid bothering Mr Lebrecht who is a busy man.

My original development thrust on the Zephyr project was an extremely successful Free-Flight Scale for rubber and CO-2 power. This little project was published in the past issue of FLYING MODELS. As a second effort, an R/C sized model was decided upon. Since my radio flying has been primarily directed toward a strong orientation in Old Timers, my flying skills are somewhere well below the average Pattern flyer's. Therefore, any scale type model for my use had to possess gentle handling qualities and excellent stability to compensate for my slower reaction times. This model is an absolute pussycat, with flying characteristics resembling a Sig Kadet (oz2950).

It is not surprising that this Zephyr should behave like an oversized Kadet as it's wing section and construction should be quite familiar to anyone who has built Sig's best seller. The fuselage construction techniques used in this project also reveal my background as an Old Timer, that is, strong but light, with lots of strip and a minimum of solid sheet. Any builder with some experi-ence in scratch building should not encounter any insurmountable problems and could well learn some new tricks. Actually the model builds easily and quickly.

The model's size was dictated by the dimensions of the Sig Cub cowling and other readily available hardware. Please do not misinterpret the powerplant in my pro-totype, it is a very ancient and tired Super Tigre .51. I rarely run the throttle over 3/4ths and I am certain any good .40 or .45 would be adequate..." 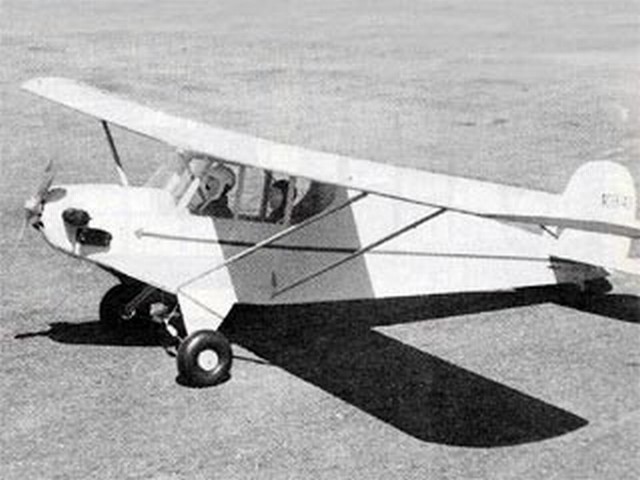