Quote: "Skyrocket by Paul Palanek. This twin-engined job will provide you with all the thrills in the book once you launch it at the end of a control line.

THE Grumman Skyrocket, alias the XF5F-1, co-product of the Navy and the Grumman Aircraft Company, was an unorthodox appearing fighter that was claimed to be capable of speed, performance, and fire power beyond that of any European fighter of its day. Its armament included cannons and because of its radical design, it was soon nicknamed 'Terror Of The Skys.'

Three such aircraft were built and flight tested in 1941. However, from a manufacturing point of view they never progressed beyond the experimental stage, although performance records show that in its day it was quite an airplane.

Our model is a close reproduction of the prototype, being built to a one-inch scale. Because of its proportions, engines up to .45 cu. in. displacement can safely be used without overpowering. Working down the line we would recommend none lower than .19 cu in displacement. The photos show a Glo Bantam engine installed in each nacelle which, for average flying, more than fills the need. If the model is intended for carrier competition, a good match is a pair of .29 cu. in. displacement engines.

Having acquired the necessary material, work can begin with the wing. Since the wing carries a greater portion of the load, both in flying and landing, care should be exercised to insure firm, solid cemented joints. The wing leading edge measures 1 x 1-3/4 x 42 in. Cement in the dihedral as shown, reinforcing it with hard wood joiners 1/4 x 1/2 x 4 in. The lower surfaces of the wing are built up in three separate sections, using 1/16 sheet balsa...

A built up fuselage is a time consuming and laborious task, so we decided to use balsa block and simplify the fuselage. A pair of balsa blocks 1-1/2 x 4 x 24 in are cemented together. Proceed with the outer contours, following closely the fuselage sections shown..." 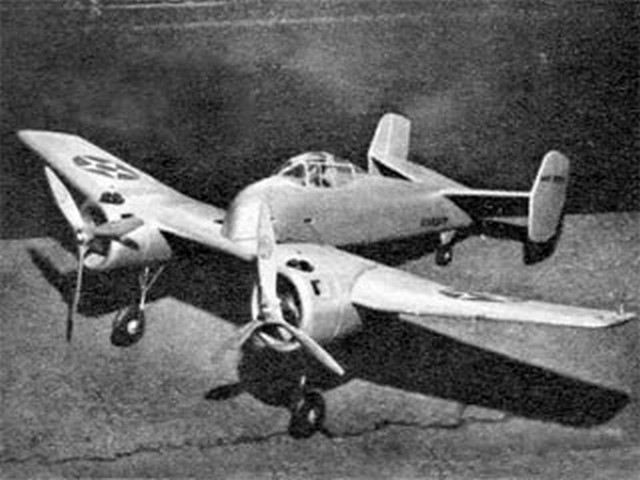