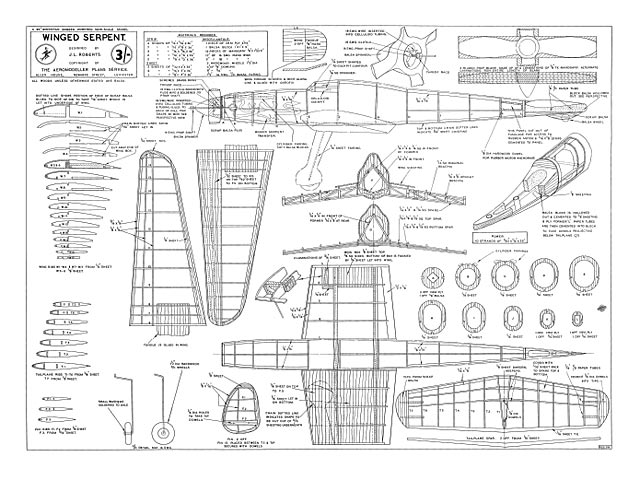 Quote: "This model was designed originally as an experimental type of low-wing model of monocoque construction, to incorporate a retractable undercarriage, but was never built as such. After the advance of our army on the continent after D-Day it occurred to me that here was the basic idea for what the Americans call an attack bomber, such as was used with the tactical air force during the liberation. Briefly then, the original was re-designed with several mods to improve its semi-scale appearance, and was finally built in its present form as 'Winged Serpent'.
It gives a very good performance in the air and has a good turn of speed so essential for such a type that lias been much admired locally. The four-blader paddle-type airscrew was necessary to keep the undercarriage dimensions reasonable, and gives a smart climb. The duration of the model is in keeping with its type and loading, but naturally does not compare with a lightweight duration model of the same dimensions.
The model is built of balsa throughout, the fuselage being a pure monocoque with 1/16in sheet balsa skinning and the inner wings also covered with 1/16in sheet, except behind the spar on the upper surface. The fuselage frames were assembled on a jig... "

Article pages thanks to Mary at https://rclibrary.co.uk/title_details.asp?ID=1450