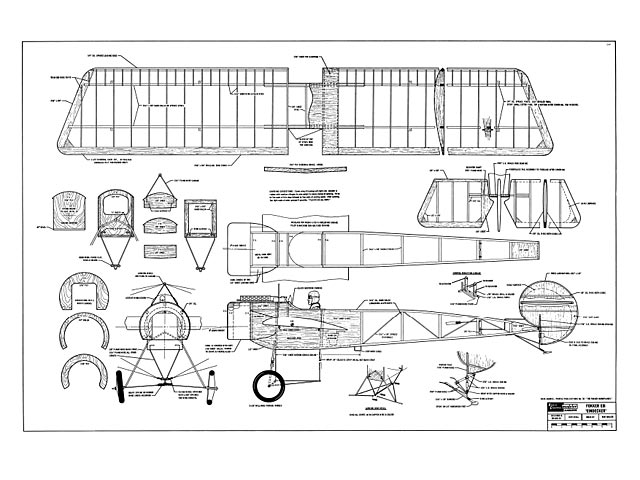 THE Fokker EIII Eindecker was chosen as a subject for a scale, sport model following a brief search for an airplane with the following characteristics:

1. An interesting, vintage-type design (having been thoroughly knocked out by 'Those Magnificent Men In Their Flying Machines').
2. Relatively easy to build, including scale details, rigging, etc.
3. Good flying characteristics with single channel systems, such as Galloping Ghost, and pulse rudder.

After considering several much-used WWI bipe designs, I ran across the Profile Publications 'The Fokker Monoplanes' and was immediately convinced that the Eindecker was the perfect fit. Aside from being a relatively simple design with its box-like fuse, constant chord single wing and minimum of rigging compared to a bipe, it appeared ideal for G-G control of rudder/elevator since it had no ailerons as such, using instead the old wing warping system for lateral control. A few other pluses were the wide track landing gear for good ground handling characteristics, and a longer-than-average tail moment. The fact that the Profile publication and several other recent books contained a wealth of technical data on the EI, II, III, and IV series of aircraft clinched the choice.

A very compact model was desired which would accommodate any of the light weight single channel systems available, and use the economical .09 to .15 cubic inch engines which are about the smallest size, reliable throttling R/C power-plants. A scale of 1.6 inches to the foot was selected, which yielded a 49 plus inch span and about 370 square inches of projected area.

First a word about the Fokker ElII itself. In 1913, Anthony Fokker, the famous Dutch aeronautical engineer, began a series of aircraft designs patterned after the successful French Morane-Saulnier Type H monoplane. This work eventually resulted in the first of the famous Fokker Eindecker, or monoplane, series. While the lines of these vehicles resembled the Morane, very different and unique structural concepts were employed by Fokker, including a welded all steel tubing fuselage frame.

Procurement by the German military of the prototype M5 model commenced in 1914. During the early stages of the war, these aircraft saw very limited use. In 1915 however the military airplane took a giant stride toward being an effective offensive weapon, and the Eindecker played a dramatic role. Anthony Fokker had devised a synchronizing mechanism which permitted a fixed machine gun to fire forward through the propeller arc, without striking the propeller blades, thereby permitting precision machine gunning from aircraft for the first time.

An improved version of the M5, designated the Fokker EI, was quickly ordered into production, outfitted with the new secret weapon. By late summer, and through the remainder of 1915, German pilots were swooping down upon French and British planes firing through the prop with deadly effect. Although the air war on the Western front was dominated by the Eindecker during this period, its supremacy was rather short-lived. Newer, more advanced Allied air-craft had eclipsed the Fokker menace by the summer of 1916.

Construction. One of the potential difficulties which worried us in building the prototype model was the 'all flying tail' control system used an the full sized aircraft. Rather than clobber the unique and rather wild shape of the Eindecker's elevator and rudder with non-scale tabs at the trailing edge, or splitting them into two pieces, we decided to let the whole thing flap, even though it is strictly not conventional in GG to use surfaces this large. By greatly reducing the throw on both rudder and elevator, however, this problem was solved - in fact our expectations were greatly exceeded! Not only does the control response seem better, but the flapping surfaces are definitely less visible than smaller, larger deflecting surfaces. The other concerns were the small scale dihedral (zero degrees!) and the fairly small tail surface areas. To correct this, 6 degrees dihedral per wing panel was added (which gives more than adequate lateral stability, 3 to 4 degrees would be OK for GG) and the tail area was increased about 20%.

The prototype weighed in at just under 2-1/2 pounds with an Enya .09 for power. A Min-X 1200 GG system, using a home-made Mighty Midget actuator ala Bill Northrop's Galloping John system with push rods, was installed. The new RAND actuator now offers the modeler a much better actuator with all of the rather touchy mechanical gadgets ready made. About 75 flights have been logged with the GG model, suffering during this time no more than a worn through tire. The landing gear set-up allows excellent taxiing, long straight take-off runs, followed by scale-like flights, including low level buzz jobs, loops, touch-and-go's, and power on landings.

Most of this performance and the ease of handling can he attributed to the low wing loading and the consequent slow, scale-like flying speed. So keep it light if you plan to use the single channel gear and smaller engine sizes. The same model has also recently been fitted with a small 3 channel proportional system, the 'SPARTRIO,' and a Fox .15 engine. Weight in this case is just a shade over 3 pounds. Since some of the very small 6 channel reed gear is lighter (11 to 12 ounces airborne weight) than the SPARTRIO or DIGITRIO systems, I'm sure it could also be accommodated by the EIII with equal success. Enough said? If so, clear off the bench and get ready to build one of the most satisfying stick-and-paper-type models you may have built in quite a time..."

NOTE note that the dihedral braces on the right side of the wing plan are drawn one bay too long.

Article pages, thanks to Cavitation. 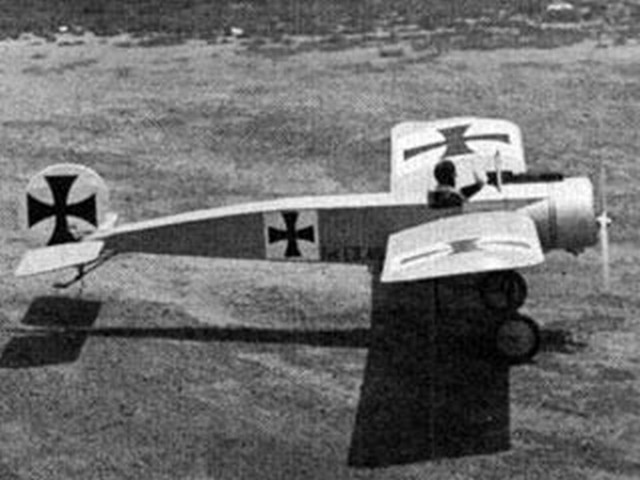