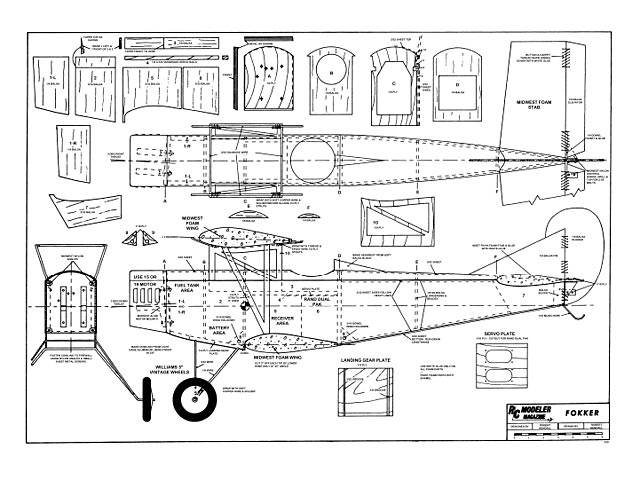 This Fokker plan and the Nieuport (oz9172) plan both appeared together in the same RCM article in March 1968 title: "Easy Biplanes". Both plans use the Midwest foam wing, so no wing parts or layout are shown.

Quote: "Easy to build and easy to fly, these not-so-scale WWI biplanes are designed for .15 to .19 engines and Midwest moulded foam wings and stabs. Suitable for Galloping Ghost or the new small proportional systems.

AS the first light of dawn breaks over the Eastern horizon there is the sharp crackle of a Le Rhone as man and machine rise up to meet the day halfway, on their way to another perilous mission into enemy territory. The Dawn Patrol is on the prowl again.

If you, as I, have always had a touch of nostalgia for biplanes, especially World War I biplanes, now is the time to relive again those glorious days of yesteryear. (I think I may have my stories mixed up.) Anyway, Midwest has now made it easy for all biplane lovers by making foam wings and taking all the 'fun' out of building two wings!

When I first saw these wings I decided to design a biplane for my 15 year old son, Tim. I decided to use the foam wings, to take the work out of building, and the Min-X Rand combination to put reliability in Galloping Ghost. I thought this also would be a good opportunity to make a plane as simple and easy to build as possible for the kids. One they could be proud to take to the field. Don't get me wrong, this is not just a plane for beginners. By putting a 15 in it the kids can handle it and also do stunts instead of just going in circles. The more experienced can put a 19, Galloping Ghost, reeds, or proportional in it and have a ball.

Since this is a plane that can be easily built by beginners, I will give detailed building instructions. So, if you are ready, 'Contact!'

Construction. Start by cutting out all parts, fuselage sides, doublers, farmers, servo rails, cabane struts, fin, rudder and elevators. Be sure to cut the right fuselage side lie" shorter at the nose than the left side. Contact cement the doublers to fuselage sides start-ing at the nose and working back. Be sure to start 3/4 in from the nose with the first doubler in order to leave space for the 1/4 in firewall. Use white glue for the servo rails. Don't forget to make right and left sides and taper the doublers where cabane struts fasten to sides. Use white glue or cement for cabane struts. Glue 1/8 longerons and braces to sides.

Install formers B, C, and D. The formers Et against the offsets of doublers to make it easier to line up. Be sure the fuselage is square. When dry, pull the tail together and glue. Put in the wedge piece with the tail skid installed. Now glue firewall in place. Glue on the rear top formers and bottom 1/8 cross braces. Glue the 1/4 ply landing gear block to bottom. Bolt the aluminum motor mounts to firewall. Use nuts behind mounting plates to lock the mounting bolts in place..." 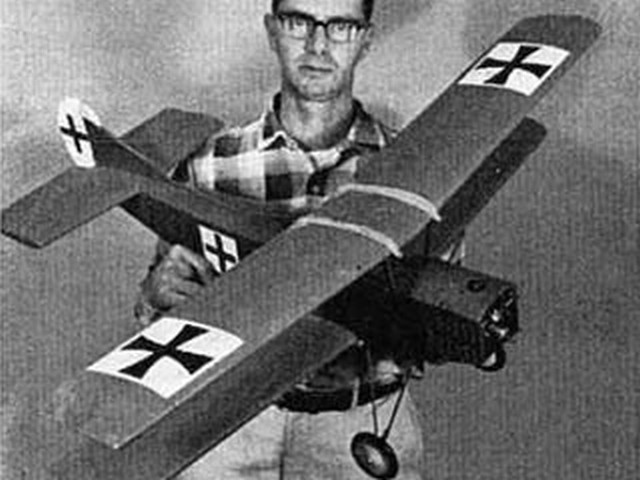