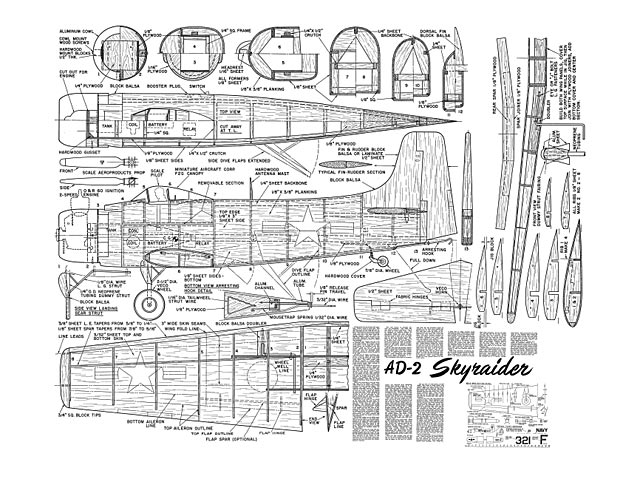 Quote: "Cal was frequently in the forefront of new types of modeling; he and his AD-2 Skyraider won the very first Control Line carrier deck event held at the Nationals in Dallas, Texas in 1950."

Update 22/03/2013: Scaled properly now. This is a pretty low resolution plan, a scanned magazine print blown up to full-size at 44in wingspan.

Update 06/02/2015: Replaced this plan with a clearer copy, scanned from fullsize plan, thanks to dfritzke.

Quote: "Construction can be started with fuselage. Engine mount is built first. This consists of 1/4 in plywood firewall for radial mounting of the O&R 60 and 1/8" plywood sides which are joined to crutch later. Join sides to firewall with Weldwood glue; use a few small brads for gluing pressure. Add 3/8 wide triangular gussets behind firewall at the side joint. Build 1/4 in sq balsa frames inside plywood sides as shown to stiffen the assembly.

Cement 1/8 sq strips to bottom corners of formers. When this assembly is dry it can be taken up from work board and joined to engine mount plywood sides. The front crutch ends should be clamped or pinned tightly to outside surface of the plywood sides while cement dries. Side formers 4, 5 and 6 can be added now.

Next add the 1/8 sheet top halves of all formers above crutch. Build up the edge stiffeners of removable section between former 4 and 7. Note that there are two No. 6 formers required in this section. Place a layer of wax paper between edge stiffeners and at former 7 so that removable section can be broken away from main structure later after planking is completed. Pin stiffeners and formers to main structure. Next add 1/4 in sheet stabilizer platform strips, backbone and tailpost.

When this structure is dry the fuselage skin can be added. Three inch wide sheets of 1/8 stock form vertical surface of lower fuselage sides. The rounded top portion of fuselage including removable section is planked with 1/8 x 3/8 strip. It will be helpful to wet the strips to form the shapes at front and rear. While planking is drying the horizontal tail can be built so that it can be assembled to tail before adding fin and rudder. Stabilizer is carved from 1/2 in sheet and tapers in thickness to 5/16 at tips.

Elevators can be built of two layers of 1/4 sheet with the Veco horn assembly sandwiched between layers, or can be carved from 1/2 in sheet like stabilizer. The elevators arejoined to stabilizer with aircraft fabric hinges or any other type preferred. Attach a 19 inch length of 1/16 dia wire to elevator horn. Slide this pushrod through fuselage structure, punching formers or notching crutch as needed for clearance. Cement stabilizer in position permanently only after pushrod and horn are checked for ample movement and freedom.

The fin and rudder can be added next. Note the two offsets in the hinge line. The fin can be built up of several thicknesses of 1/2 in sheet with front portion hollowed for lightness. The rudder is carved, from a 7/8 thick plank or can be laminated from two layers of 1/2 in sheet. Front edge of rudder is rounded at the corners to simulate shape of the prototype.

Bottom of fuselage has been left uncovered so that the arresting hook mechanism and flap system can be installed if these are to be used. If you are building a flying scale version these can be omitted and the bottom covered now; however if you intend to use model for the Carrier Event, leave bottom uncovered so that hook and gadget work can be done later after the wing is joined to fuselage.

The nose section of fuselage can now be completed. The sides top and bottom between formers 3 and 4 are built up from block balsa. This is necessary to facilitate carving of the intake scoops and cowl flap indentations. Plank the space between formers 4 and 5 with 1/8 x 3/8 strips and 1/8 sheet on the bottom and corners at the wing leading edge. The front face of the blocks at former 3 is covered with 1/16 plywood bulkhead; this should be made in sections for ease of cementing. Use cement liberally at this point. Spread a layer over the end grain of blocks and inside of plywood.

The aluminum cowl used on original model was obtained from Miniature Aicraft Corp, Staten Island, NY. It is supplied with their F2G kit. The shape is almost exactly to scale for our AD2. The diameter is 4-3/16 in; however, exact scale diameter of the AD2 cowling is 4-3/4 in. This slight difference is hardly enough to bother with, but some scale builders may wish to make up their own aluminum or lathe-turned wooden cowl to the exact dimensions.

The cowl flaps are strips of 1/32 thick aluminum sheet flush-riveted to rear cowling edge. The cowling is cut out at top for engine cylinder and exhaust. Drill side for needle valve extension and mounting screws. The timer arm does not extend outside cowling, so no cut-out is needed for it..." 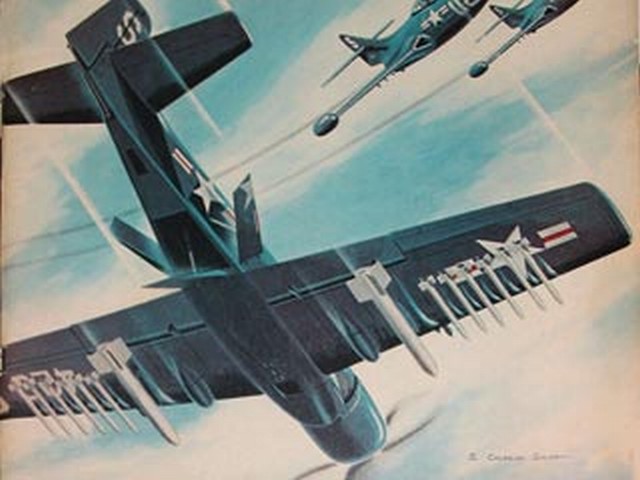 The model pic is a Cal Smith painting from the cover of Air Trails magazine, just a couple of months before the plan came out, thanks to dfritzke.
SteveWMD - 25/03/2013
Add a comment