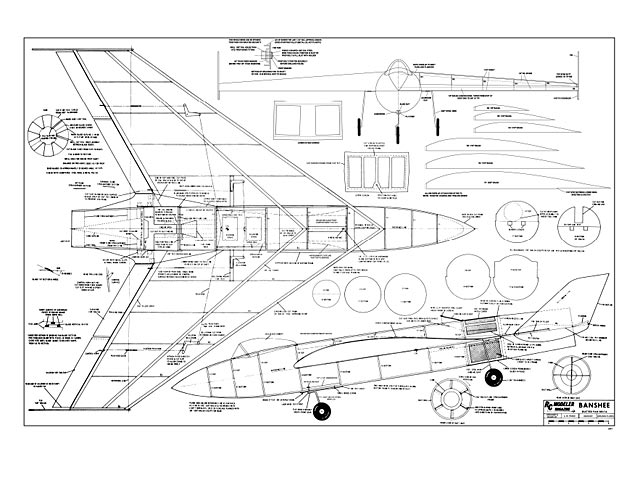 Quote: "Banshee. Thoroughly proven and flight tested, this ducted fan Delta is one of the most exciting models you'll ever fly. By Captain CW Peake.

THE 'Banshee' is designed to produce something different on the flight line, and has literally stopped the show whenever it has been flown. The basic design was produced as a free fighter using Jetex power, and a later version flew with miniature single channel radio and two Jetex 350 units, but duration was naturally limited.

PE Norman had been flying single channel ducted fan models in England for a number of years, but even with a hot engine, his best model weighed only 38 oz which would not permit multi installation. However, an American modeler named Wayne Schindler had carried out experiments indicating that Norman's practice of enclosing the fan completely within the duct gave less thrust than a fan use outside the duct inlet. This seems to be due to the fact that a fan can be designed to draw in air at the tips, rather than throwing it off, and this characteristic can be used to force more air through the duct than is possible with a completely en-closed fan. It also allows the use of side intakes, leaving the fuselage free for the installation of radio gear.

A test rig was set up, and a fan and duct unit, built along Schindler's lines, gave 22 oz of static thrust. Past experience indicated this should handle a model up to about 3% lbs weight. The first D/F version, christened "Screaming Meemie", weighed in at 57 oz, and while successful, was underpowered. The model shown is MK II, weighing 51 on., and while still requiring catapult launching, is capable of loops, rolls, and Inunelmanns except in very hot weather when power output is down.

Might be possible to counteract the power loss with a good dose of nitro, but I haven't tried it yet. It normally flies on a 10% nitro mix.

No thrust control is provided, as the Cox 15 Special doesn't take kindly to being throttled down. Some form of air flow could possibly be rigged in the duct, but this is also a project for the future.

Flying-wise, it is a reasonably docile beast when properly trimmed, but should be allowed to fly at its own speed and coaxed through maneuvers rather than forced. Elevators should be treated with caution. Don't attempt to drag it into the air with elevator, as it is likely to sink back on to the ground due to rapid drag rise as the angle of attack increases. This is known in full scale aviation as 'the back side of the power curve', and is responsible for some of the changes of technique necessary when converting to swept wing jets. Aileron control also becomes very sloppy at low speed.

This is not a beginner's model, and no attempt has been made to cover all construction steps in detail. However, the sequence given should enable an experienced modeler to reproduce what has proved to be a most spectacular airplane.

Select balsa carefully to keep weight down. Hard 3/4 sq for the spars and spar joining triangles, and soft for the rest (not 'pulpy' soft.)

Fan and duct assembly provide a good starting point. Steps in fan construction are detailed on the plans. Make sure all nicks, scratches and tool marks are polished out, and the fan carefully balanced. Also shown is the method I use to keep fan in place on the Cox 15..."

Quote: "The original draftsman for this drawing misread the sketches handed to him. The original front view has the correct wing span but the center section was off center by more than an inch. There were seven ribs per half span shown but the plan view shows only six. Also the ribs were not drawn to scale. Had to resort to cad to correct the front view and the ribs. If anyone is to build from this drawing, suggest you redraw the wing for there is some distortion. File is at 400 dpi. Gene"

Article pages, thanks to Cavitation. 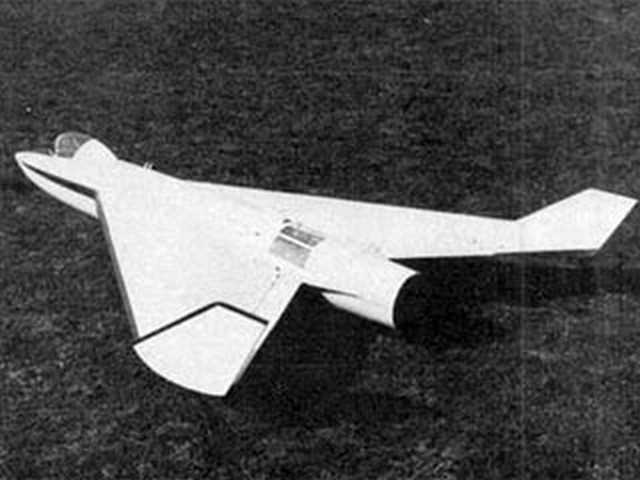