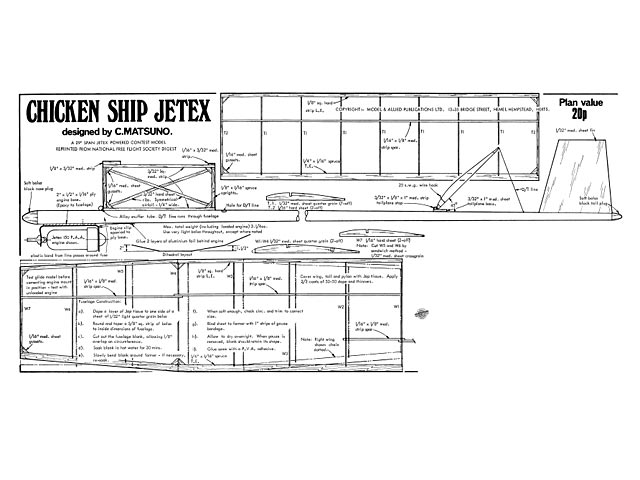 The Chicken Ship and Penny Wise (oz9141) designs were both printed together on the same free plan sheet from Aeromodeller June 1971.

JETEX MODELS are largely an ignored class in the world of aeromodelling, perhaps because they have rather a 'Kids Stuff' image, but they can, with skill and patience be developed into a highly competitive free-flight class. In the United States there is still a 'Rocket F/F' class, and it received over a hundred entries at the 1970 Nationals.

The largest engine allowed under AMA rules is the '150' or PAA-Loader, so naturally this is the only one used for contest work. With three fuel pellets, the engine weighs 1 oz and produces just 2 oz of thrust for 16-18 seconds. Obviously, with so little power, weight is at a premium - your model must not weigh more than 2 oz, and preferably half an ounce lighter.

In Chris's opinion, a rolled tube fuselage is the best solution, but if such a structure 'scares' you (unjustifiably) a built up fuselage could be substituted - in which case use a minimum of formers and only three sides (1/32 in light balsa) to reduce weight. The motor is mounted below the fuselage as points are not given for loops.

To make a rolled tube, carve and sand a length of 5/8 in square balsa to a circular sectioned, tapered rod. Try to make it really round and with as straight a taper as possible. Not easy, but possible! Carefully select a sheet of light, quarter-grained balsa, and dope on a layer of Jap tissue this prevents it from splitting. Cut out a blank the length of the balsa former, allowing 1/8 in overlap on the circumference. Soak this block in hot water for at least half an hour. Now take the blank and try slowly bending it around the former. If you hear a creaking sound, put it back into the hot water and allow to soak some more. When soft enough, check the circumference-trimming the edges if necessary. Using 1 in. wide strips of gauge bandage, bind the blank to the former, and leave to dry overnight. When the gauze is removed, the blank should hold its shape.

Remove the former, and run PVA glue down the inside seam from top to bottom. Glue outer seam with PVA or a slow drying cement to prevent warps and shrinkage. Do not be tempted to place bulkheads in the tube - they are not necessary and obstruct the D/T line. Now epoxy the aluminium snuffer tube in position, and use the same adhesive to attach the motor clip to the 1/16 ply mount. Carve the nose and tail cones from soft balsa, cement in place..."