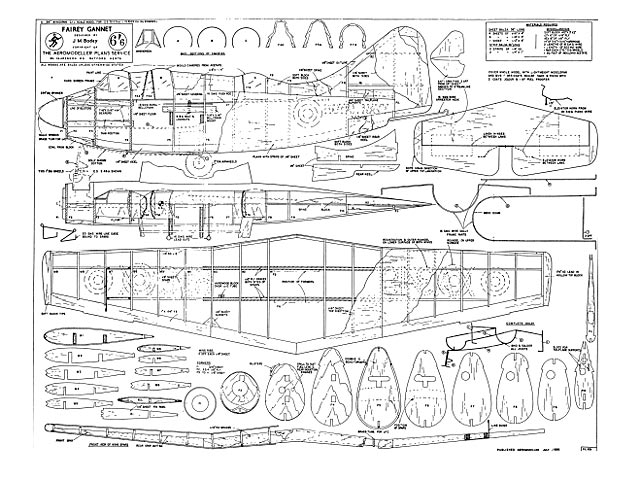 Scale enthusiasts will like the Gannet for its clean lines and variety in possible decorative schemes. Designer, at left, chose No. 826 FAA Squadron insignia for the prototype. Photo at foot of page shows the model seated on its take-of dolly.

Flying scale control line is gaining increasing favour this season and we suspect that a great many enthusiasts will welcome this most practical model of the Fairey Gannet which can be used either for sport flying or developed into an entry for the Carrier event, which is so popular in the USA.

The prototype weighed 28 oz all up, flew at 60 mph and used an ED 2.46 Racer. With 3.5 cc we have no doubt that it would be faster and capable of loops and mild manoeuvres.

Make the wings first by building up the two spars from 1/8 balsa ans 1/16 ply, then fit on all the ribs to the front spar only. While this assembly is drying, cut the fuselage farmers, then add the rear spars to the wing, together with the leading edge and trailing edge. Line guides, and undercarriage tubes can now be bound and cemented to their respective positions.

Formers F.5 and F.6 can be cemented to the wing spars, checking that they are square in the front elevations, then add bellcrank support, remembering to drill it first. The bottom keel of 1/8 in balsa is now added, also ply farmers F.3 and F.4. Engine bearers and tank are positioned in place and firmly glued (using one of the slow drying adhesives). Formers F.2, F.7 and F.9 come next, followed by rear keel and former F.11.

After all formers are firm, the 1/8 in sheet strip between formers F.5 and F.7 can be cemented in place together with the 1/8 in backbone and fin outline..." 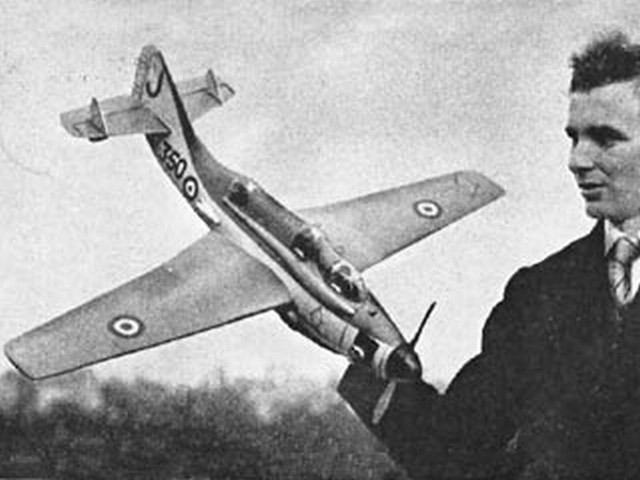