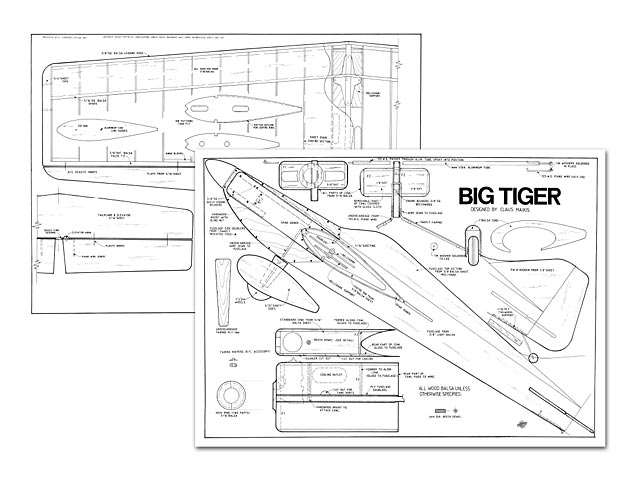 Quote: "Big Tiger, by Claus Maikis. This Profile stunter for .35 motors has a story behind it.

Do you like to turn over the leaves of old Aeromodeller issues, like me? Those issues as old as your modelling career, with the lower paper quality, inferior reproduction and smaller letter types. Now and then, in leisure hours, I blindly grab one bound vintage of about 'four feet' of Aeromodellers, some of which have been resting in the bookcase for more than quarter of a century (I'm afraid that dates me). Sometimes it's amusing to see again what we read and saw and dreamed of long ago; to see which ideas have inspired us, and which ones have caused our crashes.

There are those articles which we skipped in deep scorn, and those which we swallowed with excitement. There are plans which we built, and those which we kept in the back room of our mind to realise some fine day. One of these ideas was Ray Malmstrom's Ole Tiger (oz3477) design in the January 1970 issue. It's just a cute little aeroplane. But - being slightly competition orientated, this nice idea was always kept in mind. Other projects always had first priority, so that little tiger never came into life.

Soft spot hit: Recently I came over that article again. Suddenly I saw the possibility for a 35 size profile stunt model. The idea of a 35 aeroplane always hits a soft spot in my brain. Is it because I started stunt flying with the first OS Max 35? Because I honed my skills with many a profile stunter? I've always been attracted by simple things, simple ideas, simple designs. It's a total error to think that such things must be primitive. To make things simple is more difficult than to make them complicated. So I'm never embarrassed to design a simple profile stunt model for a 35 engine. That's how Big Tiger was born.

With most modern stunt technology occurring in America nobody knows which way control line aerobatics is going in the future. However, I feel there will always be the demand for a 35 size aeroplane. Below the 6cc capacity enjoyable and competent aerobatic flying isn't possible. More than 6cc is interesting for the diehard competition flier, but not absolutely necessary (remember that Bob Gieseke was World Champion with a Fox 35 powered Nobler!).

Fully satisfied: The majority of sport stunt flyers are fully satisfied with a 35 size aeroplane. There's no manoeuvre you can't do convincingly. Maybe not quite as perfect as with a fully grown up serious stunter, but - let's face it - do we all really want to be world champions? Beginners, especially, don't need more than a 35 engine. I've always one 35 aeroplane ready for local contests, for contests with small flight circles and for that casual Sunday morning fun flying. So the enlargement of Mr Malmstrom's creation made sense. The criteria for the Big Tiger design were the following thoughts.

Those who have learned some simple stunts and want to improve need an aeroplane which is capable of such manoeuvres as they are described in the FAI schedule. That means: size, aerodynamics and performance must meet the requirements for those manoevures. The aeroplane should have simple construction, since those occasional crashes cannot be avoided. The result is a 35 size model with profile fuselage, with adequately shaped airfoil, and with flaps.

Tailplane construction can be of sheet balsa. A small disadvantage of profile fuselages is the possible problem of engine vibration, so there should be some kind of fuselage stiffening. An engine cowl can serve this purpose. Finally, you should offer a little more than the usual simple profile look. Engine cowl and wheel spats are not that much work. After all, the finished aeroplane should really look like Ray Malmstrom's little one.

I happened to have a balsa wing kit for a 35 size aeroplane, the SIG Chipmunk, which is known for its stunting capabilities. So wing size and airfoil were already decided. Since the fuselage nose might come out a little heavier than usual, the tailplane need not be built up. Instead solid sheets of medium hard balsa are more adequate, fully sufficient and add to the simplicity of the design. Of course you could omit the engine cowling and get away with a little less work. But - please - do Mr Malmstrom a favour and shape them carefully and pretty.

Let's begin: I usually commence construction with the wing. After making two rib patterns A and B from plywood, all 22 ribs are produced by the sandwich method in one block. When finished all ribs are numbered from 1 to 22.

Ribs 1 to 4 are shaped to the dotted line to accept the wing planking. Now use all ribs with even numbers for the left wing panel, odd numbers are for the right panel. Wing is built up in the usual manner. It's helpful to use some kind of jig which consists of four 'negative rib' shapes. I cut these according to the outline of rib pattern A and B, two each.

Be sure that the centre line of all ribs has the same distance from your building board, or your wing will have anhedral. After adding the bottom planking the control system should be installed. This is unusual in that both pushrods leave the wing at the bottom side. Therefore the bellcrank has to pushrod arms (the longer one actuates the elevator pushrod).

For the horns, I see no other solution than to produce them yourself. It's not that difficult, but you'll need a blow torch. I use the Camping Gaz torch (it should be available in Britain, too). It's not expensive; solder is available from the same brand, it's perfect for our purpose (use the small torch tip), it can be used for many other applications, and replacement cartridges are cheap. Of course any other brand will work as well. But remember - the horns must be silver soldered!

With the control system installed - pushrods already fixed - the wing construction may be finished. I prefer RC plastic hinges for all control surfaces, the type with the wire pivot. The hinges must work absolutely freely. Sometimes I even rework the bearing parts to eliminate any friction. Be sure that the flaps are in 'neutral' position when the bellcrank is in neutral. This can easily be achieved by making the pushrod a trifle too long, and then adjusting it by bending where it leaves the wing cutout. Don't skip the centre rib parts, they are essentially necessary in a profile model. Only this way will you get a solid fuselage to wing connection.

After making the tailplane fuselage construction will start by cutting the two balsa main parts. The top part may be cut from a stiffer sheet. Shape the wing cutout slightly smaller than the actual wing centre section; perhaps you should use a card pattern cut according to your particular wing. Cut off the bottom section, which allows the wing to be installed..." 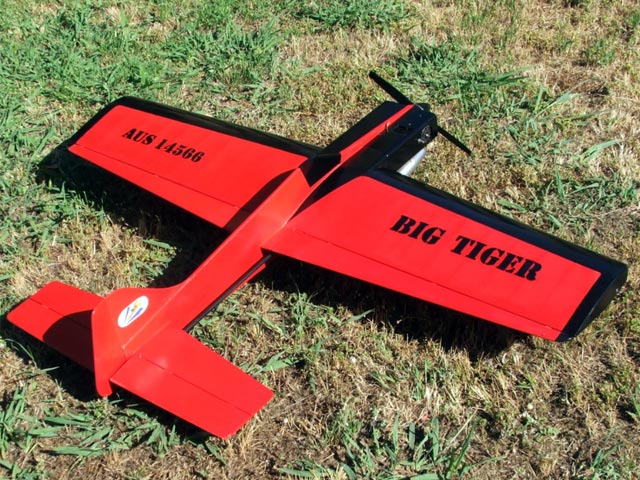 Pictures for Big Tiger from Today Building Thread by RC-network from my www.rc-network.de/forum/showthread [more pics 003, 004].
BerndLangner - 31/08/2017
G'day OZ admin. For more info, hints and tips on building a 'Big Tiger' here is a link to my build log: https://www.rcgroups.com/forums/showpost.php?p=31651287&postcount=1 It does fly sweetly.
DannyMZ - 23/07/2018
Dear Outerzone, In 2020 I built a control line plane from your site of the Big Tiger [pic 005]. Plane flies very well. Regards from South Africa,
Colin Paine - 26/05/2021
Did any sort of article accompanied this one when it came out on Aeromodeller?
RC Yeager - 24/08/2021
The Aeromodeller full size free plan was accompanied with a detailed construction and trimming article, 4 - 6 pages as I remember.
dannymz - 26/08/2021
Thanks for scanning and submitting the article Danny. My R/C club is habilitating an area for control line flying and I'm toying with the idea of building a model to relive the couple of years that I flew C/L before switching to RC (1976!!!). A profile model makes the most sense, a bit less work involved, you know, just in case the maiden lasts only a few seconds But I dont really like profile models. This one, being semi-profile seems like a good compromise, and actually looks kind of cool.
RC Yeager - 30/08/2021
Add a comment