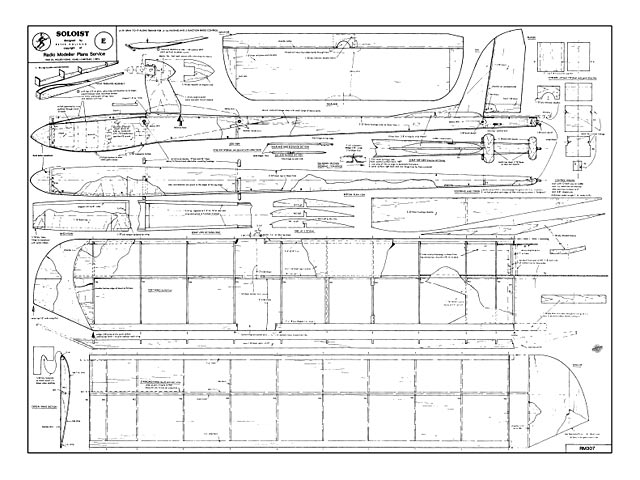 Quote: "Eliminate the heartache of learning to fly R/C with this user-friendly beginners' design. Soloist, by Peter Holland.

ARE you a go-it-alone modeller? Can you find no-one to teach you the rudiments of flying? Soloist II and some not too breezy weather might help you. True, one of the best ways of learning to fly is to enlist the help of an experienced pilot and to fit your transmitter up as a 'buddy box'. This quaint term descibes a second transmitter electrically linked to the instructor's transmitter, so that when the latter has flown the model to a safe height, and put it in a convenient position, the pupil can be 'switched in'. The instructor can regain command at any time to make corrections.

Another approach is to wait for the right weather - strong winds and uncertain gusts can play havoc with a normal trainer model and take the learner off guard in the early stages of the practice. Having picked the weather, use a slow, docile model that will give one time to make corrections - a model that will free flight safely between gentle nudges of control, much like a 'radio assist' vintage model.

Soloist was designed specifically to prove the point that the average non-R/C modeller could learn to fly without even an experienced pilot at hand to snatch the transmitter away to regain control. Now, I was not going to just lend the prototype to anyone. Lack of designer's confidence, you might say. Not a bit of it. My guinea pig, 13 year old Garry Child, was picked for his complete lack of experience. He had never built a free flight or control line model, let alone flown one. Radio control was beyond his wildest dreams at his then level of experience. I gave him the plan and building instructions and a few notes on what, to expect once the model was airborne. He was asked to arrange a meeting when the model was finished and he had learned to get the engine started - I think he was expecting me to test fly it, but no, he had built it, he was going to test it and test himself at the same time!

After spending two weeks making the model and a whole weekend mastering the engine, to say nothing of the cost of his 2 function radio, HE was the one who had to be confident. Well, let's face it, if he broke someone else's model it was not going to be so personal a tragedy.

In at the deep end. I did check the model over to make sure that there was nothing dangerously out of alignment and that the controls moved the right way. It was a good bit of building and not too bad a bit of covering, but there we were; new and untried model, radio and pilot. I put my hands firmly in my pockets and resolved not to shout instructions. After two abortive attempts at launching, Garry had his Soloist gaining height in a wide natural turn; eventually he tried a gentle correction, then a larger one, then a full jab of rudder...a counter-correction. After a few minutes of knee trembling excitement, our trainee was walking off to fetch his machine where it had put itself down unharmed. Why didn't you tell me what to do? he asked as he came back. You found out, I replied.

After two afternoons of self-instruction he could keep the model in a smaller piece of sky and learned not to make last minute corrections to the landirjg approaches. Scuffs, dents and splits there were, but none so serious that could not be dealt with on the spot..." 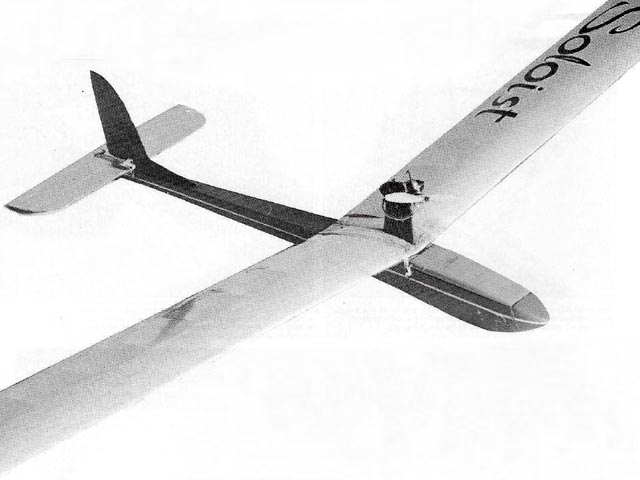 Many thanks for publishing the Soloist plan. I built the Soloist about 1989, and learned to fly RC, without any problems, using the model. This was after about 3 attempts on other models I had built. I have now used Posterazer to print the plan out on A4 sheets. I have done the wings and fuselage separately using landscape mode. Saves paper and does not cause distortion problems trying to make one full size plan. If anyone wants copies of the Posterazor sheets just email me on malcolm.jackson.ntlworld@gmail.com
Malcolm Jackson - 22/01/2019
Add a comment