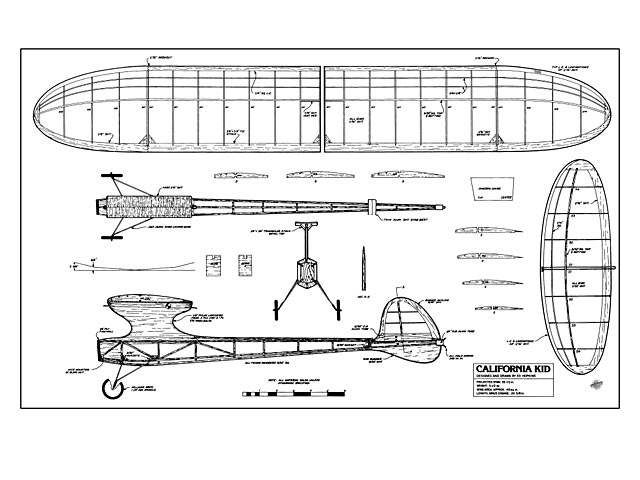 Quote: "THERE were a number of considerations that influenced the design of the California Kid. One was size. I live many miles from the closest suitable free flight area and with gasoline costs skyrocketing, I wanted to design something that would fit comfortably under the hood of my old VW Bug.
A second consideration was limited, but not too limited, power. I wanted a design that had satisfying performance, yet stopping short of the sometimes hair-raising behavior of the all-out competition machine. And that's how things worked out, but just barely. With the Cox Pee Wee swinging its prop around at 18,000 rpm and just 3-1-2 ounces of all-up weight, the California Kid is anything but docile. In fact, it will perform right alongside all but the very best .020 Replica machines.
Simplicity was a third consideration. After building a number of intricate AMA gas designs, I wanted to produce a plane that would go together quickly and easily. I also wanted to keep the gadgetry to an absolute minimum - hence no VIT, auto rudder, or even timer. And keeping things simple had the added virtue of keeping costs down, an idea that becomes more attractive every day.
But perhaps the single greatest consideration was appearance. I had become increasingly interested in the Old Timer movement and I wanted to create a plane that incorporated all of the luscious curves and ellipses found in the best Golden Age designs. I suppose that it would have been easier to have just selected one of the fine .020 Replica kits that are currently available, dropped in the Pec Wcc engine and gone flying, but there didn't turn out to be any single OT design that I liked thoroughly. If one design had a well-shaped fuselage, then the rudder would be awkward looking, or if the contour of the pylon looked good, then the wing would be too fat. And so it went. Finally, since I didn't have to adhere to any contest specifications
anyway, I decided to design my own. The California Kid is the result..." 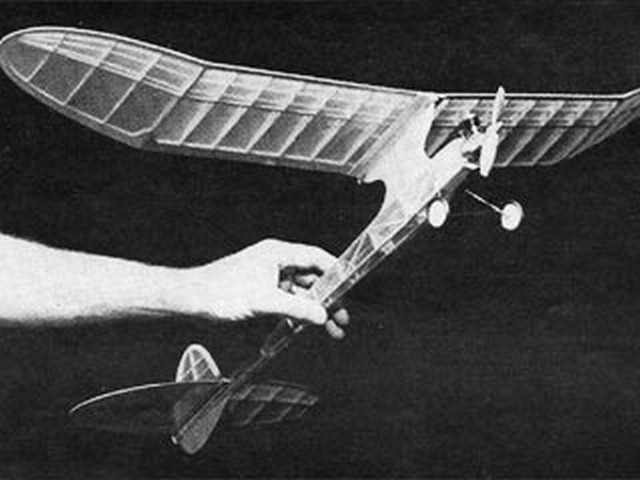