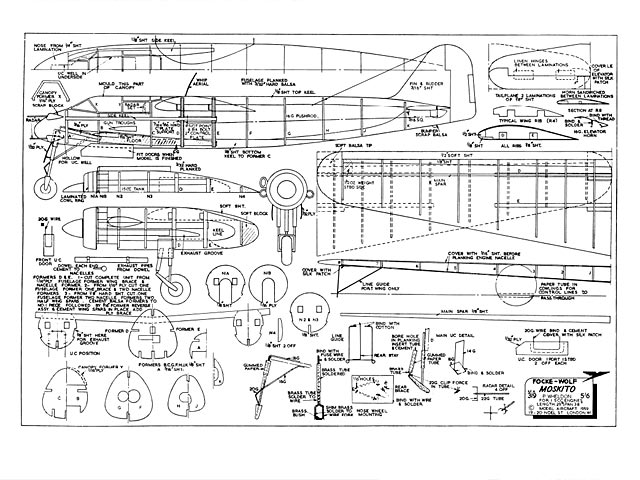 Quote: "This beautiful replica of an infrequently modelled prototype, designed for two 1.5 cc motors, won second place in the scale control-line event at this year's Nationals for designer Peter Wheldon.

ALTHOUGH never actually entering service, the Ta 154 Moskito was a unique product of the German aircraft industry. Designed in 5942 by Kurt Tank, the Moskito was the answer to the RAF night bomber raids that were, at that time, devastating Germany. Built of wood - in the same manner as the DH Mosquito - and carrying (for its day) advanced night fighting aids, it would indeed have proved a menace to any night intruder over its homeland. However, of the few machines built, the majority crashed due to failures associated with the wooden construction of which neither Tank nor the Focke-Wolf concern had any previous experience.

The selection of the Ta 154 as a scale C/L model was the result of an extensive search for a prototype with tricycle undercarriage, simple attractive lines, and a nice colour scheme, but steering clear of the 'usual' C/L twins. It was felt that although the full-size machine was a failure, the Ta 554 was of historical interest as being the German counterpart of the famed British Mosquito.

The model is of quite straightforward construction, but is not a project for a few evenings' hurried work. Patience and care are required and, as the photographs show, the result is well worthwhile. Powered by two AM 15s, the original weighs approximately 34 oz and flies on 52 ft 6 in lines. Single engine performance is quite safe, the model showing no tendency to come in.

These three units are linked by the two master formers, O and E, which must be very carefully made before any other work on the model is commenced. The plan is very explicit and therefore the building instructions have been kept brief, merely outlining the sequence of assembly.

Fuselage: Cut out, all parts for formers D and E and carefully assemble these. The remaining fuselage formers are then cut out, followed by the top and bottom longerons and front side crutches. Form the main undercarriage legs and bind to former D with linen carpet thread, then cement D and E in position, on the bottom longeron, holding true by temporarily inserting the engine bearers in their respective positions.

When dry, add the remaining formers, top longeron, and front side crutches, etc. Build up the tail assembly and install the control assembly in the fuselage - hook up to elevators, and cement the tail unit in place. After installing the 18 SWG lead-out wires, the fuselage may be planked with 3/32 hard sheet. Before completing planking, build up the nose wheel assembly, bind onto the 3/16 ply plate, and install in the nose wheel well. The planking can now be completed, nose block added, and the whole fuselage, finished and sanded smooth.

Wings: Cut all the ribs from 1/8 medium sheet, assemble the leading edge, cement ribs on spars and add leading edge. (Note: leading edge is simply pushed through the fuselage planking and well cemented in place.) Sand the top of the leading edge to conform with the wing section, and cover the entire surface of the wing - top and bottom, including areas that will be inside nacelles - with hard 1/16 sheet. Do not forget the ballast weight in the starboard tip. Add wing tips and sand completed wing to proper shape and section.

Nacelles: Cement the engine bearers in position, ensuring that there is no inset on them. Cement the bottom nacelle longerons in place and all nacelle formers, together with fuel tanks. Check that all is true. Add 1/8 sheet exhaust groove backing pieces and the nacelles are ready for planking with hard 3/32 sheet. When this is complete, add the cowling rings and fairing blocks of soft balsa, then sand the completed nacelles to the correct shape. Bore holes through the port nacelle and insert paper tubes for the control wires to pass through.

Finishing: Cement silk patches over all the wing to fuselage and the tail to fuselage joints - these patches add considerable strength, so be liberal with the cement. Give the whole model a coat of thick clear dope and when dry sand down with fine garnet paper. This is followed by a good coat of sanding sealer (talc/dope mixture) again sanded down when dry. Fill up any bumps or crevices with sealer and apply lightweight tissue over the whole assembly, then apply a further coat of thick dope. Add the cockpit canopy formers, cockpit details, and then glaze the canopy. Now apply further coats of sealer, sanding between each coat until a satisfactory surface is obtained.

When satisfied, colour the whole model a pale French grey using thinned down dope. Give several coats, using wet and dry paper between each one until satisfied with the finish. Now colour all upper surfaces with a medium shade of grey dope, repeating the finishing process as before. Apply shadow shading using a darker green-grey shade by means of a spray gun. Then add insignia and final trim.

Finally, add the undercarriage doors and exhaust tubes, give the whole model one coat of thinned down fuel proof varnish (engine bays require unthinned varnish) and your Ta 154 is finished. Check the balance point with engines installed and see that there is no inset on them. Test fly on 40 ft lines, but first ensure that all control line clips, etc., are secure, as the pull of this model, is quite something. The best of luck." 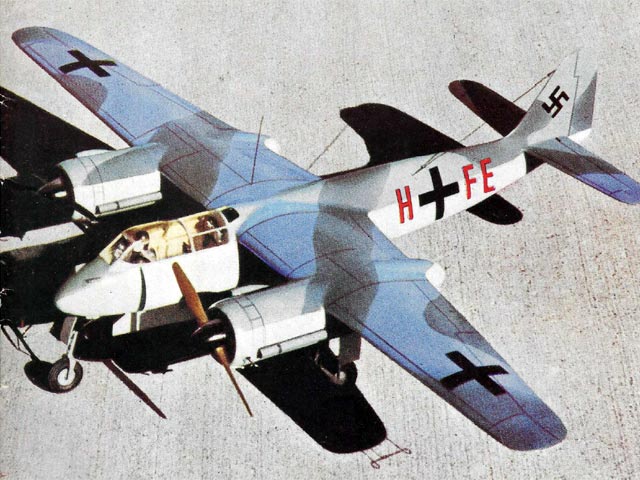 While the fuselage and engine nacelle formers are complete, 7 of the 8 wing ribs are missing from the plan. The large wing cutaway appears to be between ribs 1 and 2, and the small cutaway appears to be a scaled down section near the wingtip. The only wing rib given in the plan is R4.
anon - 23/12/2015
Add a comment