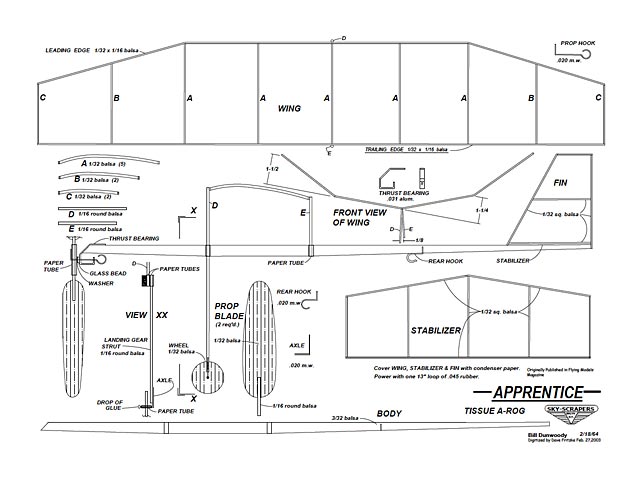 Quote: "The Apprentice is a little rubber 'indoor job' as they used to say. I actually built 2 of these and could get them to fly 4 very slow laps around a 12x12 living room. I even used condenser paper covering, which I am not sure you can get anymore (Sams Models?). The Apprentice was published in [1964] Flying Models Magazine (RIP) and done by Bill Dunwoody. We have a Dunwoody Institue here in Minneapolis, not sure if it's related to him or not. Dave"

Quote: "Full Size Plan. Introduction to Indoor, oblivious to weather. Plans
build. And it flies in slow motion. The Apprentice, by Bill Dunwoody.

Aeromodeling is supported to be fun! It has its problems though, lack of a flying field, bad weather, balky engines and hard-to-build models all can take some of the fun out of it. Newcomers to the hobby, particularly young ones, tend to get discouraged by the difficulties. The Apprentice is guaranteed to provide more fun than problems!

Haven't got a flying field? The Apprentice can do 90 seconds in a fifteen foot square living room and three or four minutes in a small gym. If the weather's bad, who cares. Forget that hard-starting engine, this model goes on rubber bands (even the stationery store variety will do), and you can THE APPRENTICE build it in one evening with time left for watching TV.

The Apprentice has provided as much enjoyment for experienced modelers as for beginners. It is suitable for instructing novice aeromodelers in the basics of built-up structure and tissue covering. To gain more strength, when the Apprentice is used as a trainer, 1/16 square balsa may be substitut-ed for the 1/32 material in the wing and tail, and 1/8 x 1/4 balsa used for the body.

For better performance, in the hands of modelers with a little experience, the material in the wing and tail may be reduced to 1/32 square and the body lightened. As it is shown on the plans, the design is a very good fun model for everyone. Why don't you give it a try?

MATERIAL: Sand 1/32 sheet balsa smooth on both sides. Slice it into 1/32 and 1/16 wide strips using a metal straightedge to guide your razor blade. Bend each strip slightly to make sure it is uniformly strong, rejecting any strip in which the bend is concentrated at one point. Slice ribs from 1/32 sheet using a template (or a French curve) in the same way as the straightedge was used in slicing the strips.

Cut out the two propeller blades and a wheel from the 1/32 balsa. Shape the body from sanded 3/32 balsa. Sandpaper a 7 long piece of 1/16 square balsa to a round cross-section for the landing gear strut, prop spars and wing struts (D,E). The axle, rear hook and prop hook are bent from .020 music wire and the thrust bearing is formed from a piece of aluminum 1/32 x 3/32 x 1-1/2. Note that the rear hole of the thrust bearing has a slot cut upward from it to permit the prop hook to be snapped into place.

Paper tubes are formed around a piece of 1/16 music wire. Start by cutting a piece of tissue about 2 in square. Dope one edge of the tissue to the wire and roll up a thickness of three or four layers of paper. Before the dope has a chance to dry, slide the paper tube along the wire to prevent paper from becoming permanently stuck to the wire. When the dope has dried, remove the tube from the wire and cut the tube into pieces for the wing mount, landing gear mount, wheel hub and propeller hub.

CONSTRUCTION: Lay out the parts of the wing, stabilizer and fin on the plan, ad-hering them together with a small amount of cement at each joint. When the glued joints on the wing have dried, crack the edges at the three dihedral joints and raise each wing panel as shown on the front view. Cement these joints well.

Round off the edges of the propeller blades and cement the lie prop spars into the slots in the blades. When the cement has dried, soak the blades in water and wrap them around a can or jar, as shown in figure #1. Al-low the blades to dry completely before unwrapping them. Pierce the center of the wheel and cement the paper tube hub in place.

Cut a 1/8 long piece of 1/16 round, coat it with a light coat of glue and push it to the middle of the prop hub tube. Pierce the tube for the prop hook and push the hook, cementing it securely and making sure that the tube is at a right angle to the shaft of the hook.

Cut the wing mount struts (D, E) to length and adhere them to the edges of the wing, making sure to get them at the angles shown in the front view. This angle will give a small amount of twist to the wing when it is mounted, to help prevent the Apprentice from spinning-in in tight turns.

Cover the top surfaces of the wing and stabilizer, and one side of the fin, with condens-er paper (Jap or Superfine tissue may be substituted if no condenser paper is available). The wing must be covered in four pieces, one panel at a time. Use dope or thin shellac to fasten the tissue. Mount the stabi-lizer on top of the body, and the fin on top of the stabilizer, using a drop of cement at each edge and taking care to position them at right angles to each other.

Check the fit of the 1/16 round struts and spars into their tubes, sanding the struts smaller or squeezing the tubes slightly as required. Assemble all the pieces, putting the bead and washer on the prop shaft before putting the hook through the thrust bearing. The pitch of the pro-peller blades may be set by eye (so that each blade is at the same angle to the prop shaft) and may be adjusted to suit the flight pattern desired. Usually, the high-est pitch which will permit the model to climb to the ceiling is close to the most desirable.

The Apprentice is powered by a loop of 3/64 rubber, nice and fresh, about 13 long, longer or shorter loops and lighter or heavier rubber may be used to vary performance. The length of the loop should be as long as possible while permitting the prop to run out all the turns in the air. Wind the motor using a winder, about 300 turns should do for the first flight, with more added as the model is trimmed out. The Apprentice should fly in left circles under power with no adjustments other than those which were built in. If adjustments in the turn are required, make them by bending the thrust bearing to change the direction in which the prop pulls the model. If the model dives, push the rear wing strut down in its tube and cure a tendency to stall by pushing the front strut down in its tube.

Trimmed properly, it will takeoff from the floor and fly smoothly in 12 foot diameter circles up to the ceiling, bumping there for a few seconds and then coasting down for a landing." 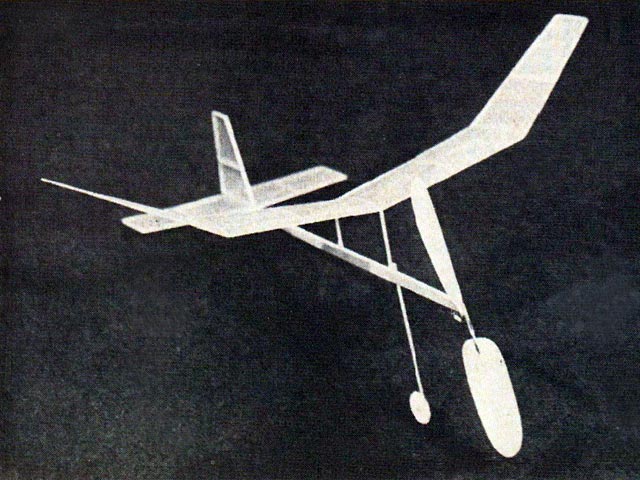