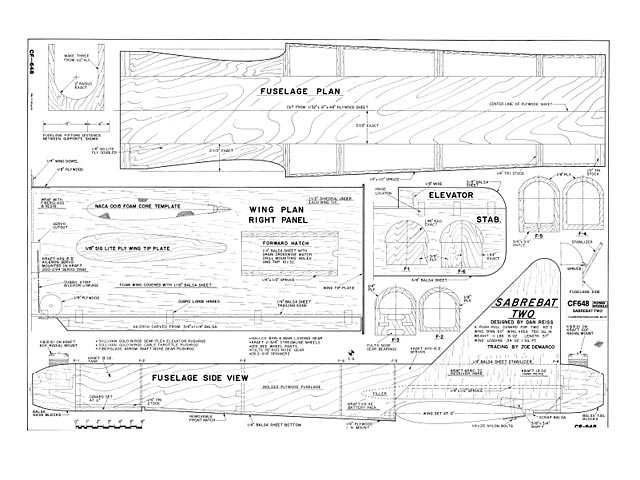 Quote: "The Sabrebat II is the culmination of the author's experiment with a twin engine canard. The original Sabrebat (FM, May 82) was the prototype. Sabrebat Two, by Dan Reiss.

Those of you who are regular readers of Flying Models may remember a couple of articles that I authored in two previous issues. The May 1982 issue contained the construction article for an R/C pusher canard I dubbed the 'Sabrebat' and in the August 1982 issue there appeared an R/C twin tractor model of a more conventional configuration called 'Two Square'. Although the publication dates were only three months apart, in reality the first flights of both models were separated by about six months. During that intervening period of time, I did quite a bit of experimenting with the Sabrebat that occurred too late to be included in the original article. One of the consequences of showing up at the flying field with this canard was that I was constantly besieged by an armada of aircraft designers whether self taught or college educated. I was receptive to their thoughts and interested in doing a little experimenting myself. They all had an abundance of ideas of how to redesign Sabrebat and it was up to me to filter out the bad ones from the good. Well, along came a spunky, bright eyed young aeronautical engineer undergrad from UCLA who really seemed to know what he was talking about. He convinced me that the wing tip vertical stabilizers were totally unnecessary.

With the help of a #11 X-Acto blade I cautiously began to reduce their size in small increments after each flight. Lo and behold after a few flights I had them cut down to the size of mere tip plates with no ill effects on the model's flight characteristics. In fact, the planes' rolls were better than before. I'm sure that kid's going to go places. Armed with that bit of scientific success achieved mainly by empirical experimentation, I became a bit brazen. I thought how neat the plane would look without the vertical stab but with the wing tip stabilizers only. I figured success would only breed success.

Unfortunately, I was 50% wrong. I was right about the plane looking great but it didn't fly worth a darn. Without the vertical stab the plane did not respond to aileron control but skidded off into the direction of the downward deflected aileron. With this type of control I had little to do but watch the plane quickly head towards a very large inanimate object commonly called Earth. Luckily, the plane hit a soft spot. It was damaged but it was not fatal. Considering what could have happened, not much did. Although the canard broke off, it remained in one piece. The main damage was sustained around the forward portion of the fuselage above where the canard used to be. Everything else remained intact.

After surveying the damage and envisioning the re-building that would be necessary, it dawned on me that there was room up front for another engine and fuel tank. All it required was some plywood doublers for repair and re-inforcement and a radial engine mount. Admittedly, the first thing I did was to epoxy the vertical stabilizer back in place and remove the tip stabilizers. The plane was repaired, re-painted and ready to go with another .60 engine attached to the front and raring to go. So out to the field I went, got both engines roaring and let her rip. The model went tearing down the runway, jumped off the ground and went climbing for the sky like a homesick angel. I let her climb for altitude before leveling off into an 180° turn. She really picked up speed as I let her lose some altitude with those two 60's screaming.

Just about the time I was beginning to enjoy the show, I heard the all too familiar sound of high frequency flutter and suddenly the vertical stab went one way with the plane going the other. As the stab floated gently to the ground the rest of the plane headed straight for Mother Earth also. In no time at all, the front engine was quickly heading for the rear one with the plane in between. Needless to say, that was the end of Sabrebat but it did have its 90 seconds or so of glory as a twin. She performed superbly during that short time being the victim of structural failure. I picked up the bits and pieces, went home, and got involved with building 'Two Square'. After she was completed and suc-cessfully flown I began thinking about a twin canard, but this time specifically designed and stressed to handle the extra loads..."

Hello Steve and Mary, The Sabre bat Two ...I built from 1:1 Plans. The Scan since from this. Pics and video from Sabrebat Two are here: http://www.rc-network.de/forum/showthread.php/4481... Greetings, Bernd 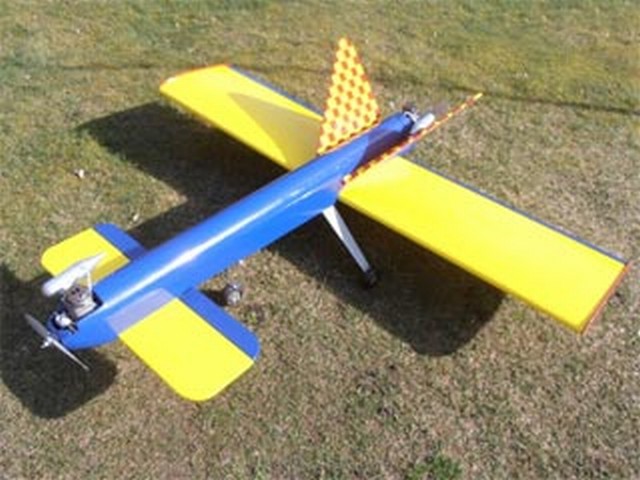