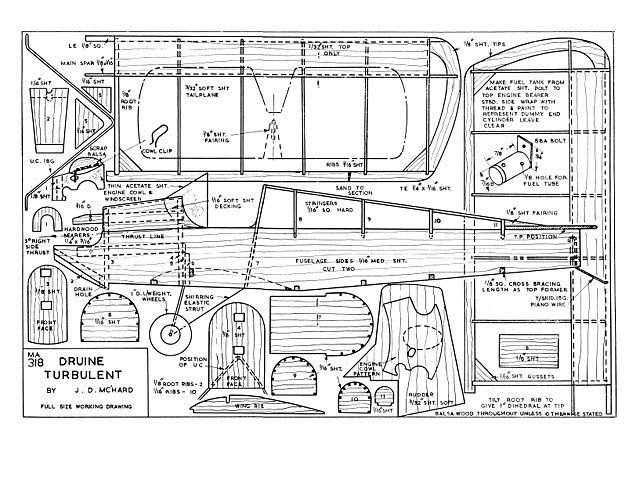 Quote: "The Royal Turbulent. Doug McHard was commissioned to build a solid scale model of HRH The Duke of Edinburgh's Druine Turbulent King's Cup Air Race entry. We are pleased to feature not only plans of this original model, but also Doug's FULL SIZE working drawings, and photo illustrated instructions, for building a Bambi powered free-flight replica of the same machine.

THIS year, HRH The Duke of Edinburgh entered an aircraft in the King's Cup air race for the first time. The type chosen was the little Druine Turbulent, a French design built in Britain by Rollasons' of Croydon. The Duke of Edinburgh's Equerry, Squardron Leader S de Milt Severne, AFC, piloted the machine and placed very well in the qualifying rounds, only to be defeated by high winds, which favoured the more highly powered aircraft, during the actual race.

Before the news of the Royal entry was made public I was commissioned to produce a 1/36th scale replica of the Turbulent which was presented to His Royal Highness, and from which the racing colour scheme was selected. 1/48th scale plans and photographs of this model appear on page 320.

Eagle eyed readers will spot one or two differences between the model's original decoration and the colour scheme eventually employed. The most obvious of these is the raring number disc which was subsequently enlarged.

After producing this little solid job, I thought how effective a F/F flying model would look and shortly afterwards built one around a DC Bambi. Full size plans are presented overleaf, and, together with the accompanying constructional photographs, should enable any modeller of modest experience to produce his own King's Cup entry in miniature.

Construction. Build the fuselage first and start by cutting nut all the formers, A in. square crosspieces. both fuselage sides and engine bearers, firom the material indicated on the plan. Before assembly is started bend the undercarriage from 18 SWG piano wire and sandwich it, with plenty of cement, between formers 4 and 6 using former sections 5 as locating and packing pieces. Allow to dry.

Cut the hardwood engine bearers accurately to the length indicated on the side view and note which is top and which is bottom. Drill the 1/16 in holes for the 8-BA engine mounting halts and elongate them forward wills a round 'Abrafile' to enable thrustline adjustments to be carried out later..." 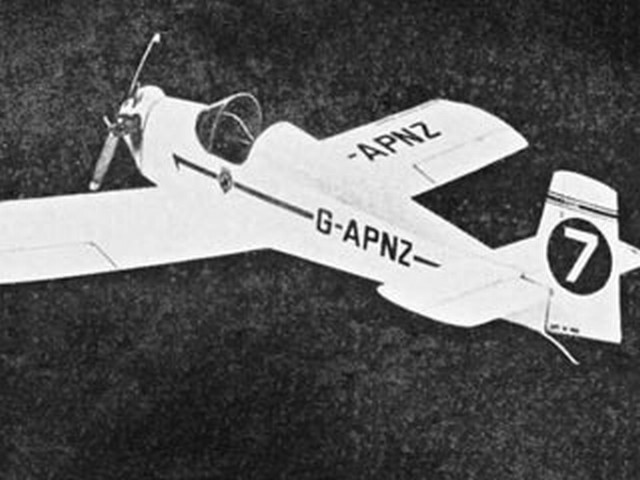