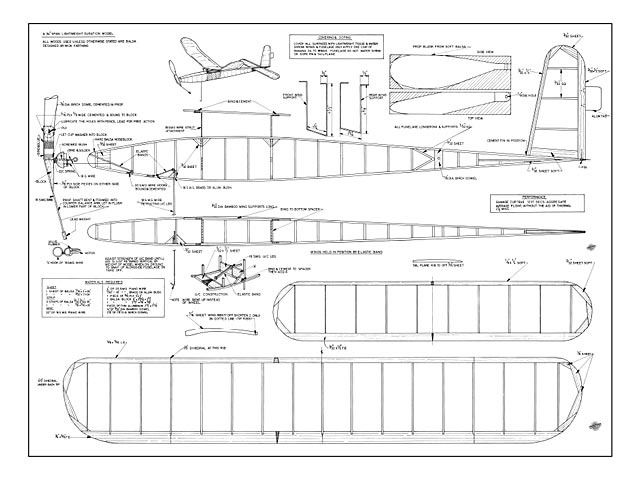 Quote: "THE announcement of a new Mick Farthing design is an event as important to lightweight duration enthusiasts as the release of some new jet project is to full-size fans. In common with other well-known designers, Mick Farthing works steadily along the same general principles, improving a little at a time and incorporating new features only when they have proved themselves in the field. It is not surprising then that Mark II of the famous lightweight duration bears a family likeness to its predecessor, which has proved such a universally popular model. Several thousands of Mark I have been built and flown to victory in innumerable contests all over the country, besides giving a vast amount of flying time to their constructors. No one who has succumbed to the fascination of this branch of flying will be able to resist this latest design.

For the benefit of those who have already built a Mick Farthing, the main improvements in Mark II are given. The diamond fuselage arrangement has been dropped in favour of a normal rectangular shape, which enables a stouter wire pylon to be fitted without soldering. Polyhedral is increased from 4 in at tips to 5-1/2 in, while 1/16 in bamboo tips to mainplane and tailplane have given place to 1/8 sheet. Fixing of tailplane is neater and stouter, while an aluminium trim tab has been added to the fin. The characteristic undercart, now a plain length of wire without a wheel, retracts automatically flush against the side of the fuselage with negligible drag. The noseblock is held in place with bands instead of relying entirely on rubber tension.

Altogether this represents nearly three years of work cleaning up the design and removing all those features that contribute to competition nerves. A comparison of Mk. I's 1943 times gives a fair indication of the improvement: Gamage Cup, 1943 agg 484 secs; ME No2, 1943 agg 4849 secs; Mark II Gamage Cup, 1946 agg 1,237 secs.

Newcomers to this highly developed branch of duration flying must not be misled in thinking lightweight necessarily means flimsy. The reverse is the case with Mick Farthing designs. Fuselage is stoutly constructed of 3/32 sq hard balsa, mainplane leading edge is 3/8 sq, and trailing edge 3/4 by 1/8 in. Very few of these models ever end their days in a crash - they are far more likely to be lost OOS. Fitted with an efficient dethermaliser there is no reason why they should not last the season, and give good flights when other types are grounded. " 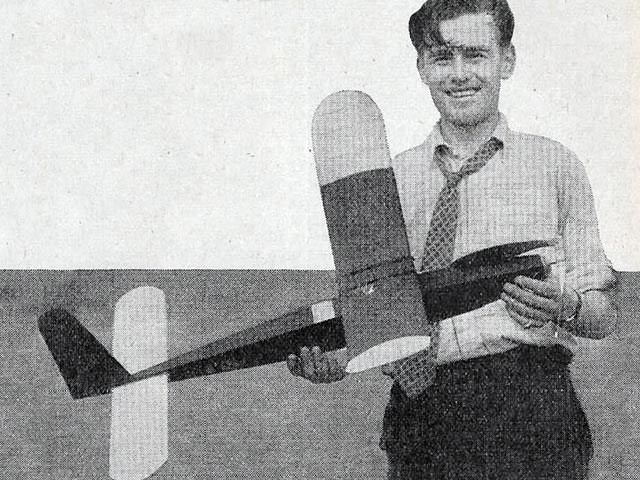