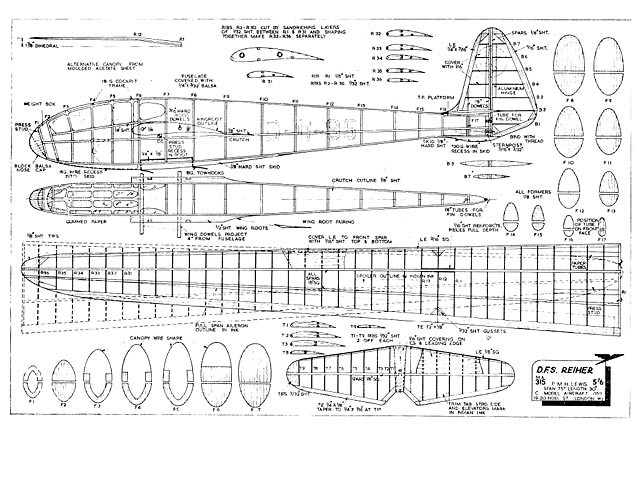 Quote: "An unusual scale prototype, this 6 ft 3 in wingspan glider has all the grace of the original says designer Peter Lewis.

Since the high-performance sailplane became an accomplished fact, purity of line has become a quality expected of it. The designer of powered aircraft is only comparatively rarely able to indulge in what is, to him, almost the last luxury but, in complete contrast, the creator of the glider is unhampered by considerations of load-carrying, power-plants, fuel tanks and the multitude of other components which go to make up an aeroplane which has to earn its living.

From Germany, foremost country in developing the sailplane during its early days, came one of the moss elegant designs of all - the Reiher. This outstandingly refined and beautiful machine, with its gliding angle of 1:33, was flown in the International Gliding Championships held at the Rhon during July 1937, the pilot chosen being the young Fraulein Hanna Reitsch, later to become prominent as a very capable test pilot.

The full-size machine's 67 ft 4 in wingspan has been scaled down to 6 ft 3 in for the model, which possesses all the grace of the original.

Fuselage. This is built on the crutch principle for accurate alignment, and for speed and ease of construction. Use 1/8 in hard sheet for the crutch itself, and after tracing the outline on to it cut out, at the same time removing the area occupied by the cockpit between formers F2 and F6 but leaving 1/4 in sides. Mark the positions of all formers on the crutch and then cut F1 to F17 from 1/8 in sheet.

Cement the formers in place above and below the crutch, setting them at the angles shown on the plan. The two tow-hooks are shaped from 18 G. wire and then bound and glued to their mount..." 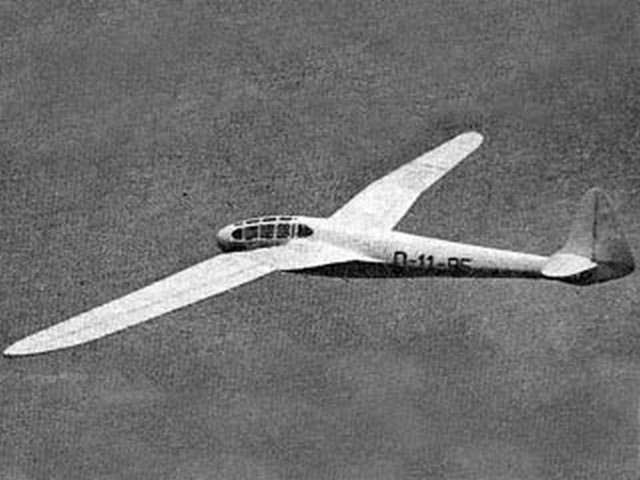