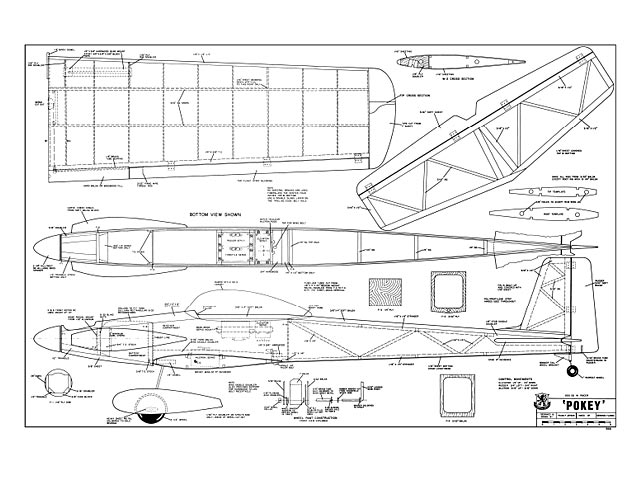 Quote: "Here's a Continental Class Racer that features sinple construction, is easy to fly and stands excellent chance of putting you in the winner's circle. Pokey by Major Frank Jepson, USAF.

Shortly after receiving my 1968 copy of the official AMA rules, it occurred to me that the provisional 600 square inch Goodyear event could do for miniature pylon racing what the Bikini did for the beaches. Here, I thought, is an event that is well suited for everyone; an event that can provide all the thrills of scale goodyear racing with much less risk to models, equipment, and spectators.

I began to mull over in my mind the virtues that a racer in this class should have. First and foremost, of course, is speed; it has to be fast, but it also should be of simplified construction to keep the, builders investment of time to a minimum. It should be docile and easy to pilot, with none of the common undesirable tendencies, such as pitch instability and wing tip stalling during high speed turns and low speed approaches. It should be rugged enough for sport flying from the roughest flying fields, yet light enough not to be handicapped while racing. And, finally, it should be esthetically pleasing and scale-like in appearance.

Design parameters having been formulated, I began to consider specific methods of achieving them. Current high performance stunt ships, it was felt, offer most of what is needed in the way of size, flying ability, simplified construction, and for the most part, good looks, so extreme deviation seemed unnecessary. Further, since it is generally agreed by most experts that low wing designs offer the least air flow disturbance created by the junction of wing and fuselage with subsequent reduction of drag, it was decided to follow convention and place the wing on the bottom of the fuselage. Additionally, low wingers offer ease of construction, as compared to mid-wingers, and they need only a lightweight minimal landing gear.

Armed with this earth shaking decision, plus the mandatory criteria established by the ruse book, I began sketching various layouts running the gamut from designs that resembled P-51's and Spitfires right up through the F-111 and Bomarc missile!

After much doodling, I finally hit upon Pokey, a layout that instantly appealed to me, and which seemed to fill the bill as far as previously established parameters were concerned. A Pokey was hastily built and flown, which unconditionally confirmed my suspicion that this was, indeed, the answer. Pokey met all the original criteria with performance to spare.

She is as easy to build as any multi-ship, is lightweight, (the original weighs only 4 lbs 10 oz ready to fly, minus fuel), is quite rugged, and handles very much like any hot stunt ship. In. fact all of the positive G FAI maneouvers have ben perfoemed with her and she literally breezes through them..." 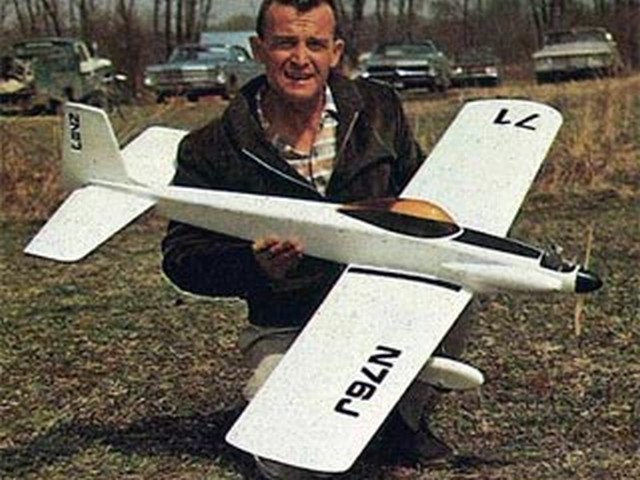