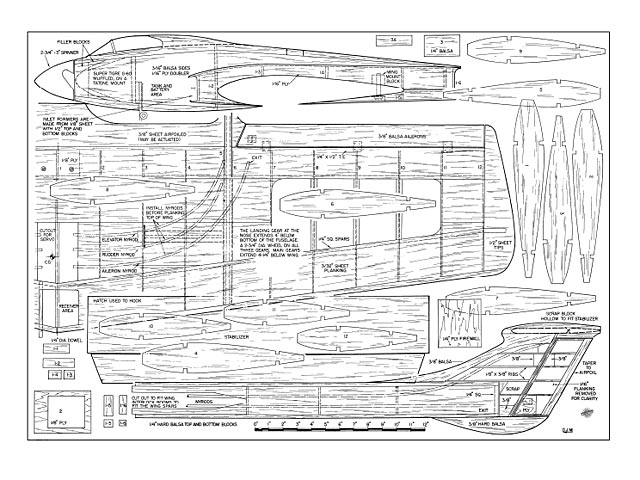 Quote: "A light and lively dashing design for a rakish twin-boom RC pattern ship that spans 64in and answers to a Super Tigre G-60 and a Blue Max Mark II system.

You've heard of Scale airplanes and Stand-Off Scale events haven't you? Well, this model is called a 'Run-Off' Scale. You run a few feet further and with a little wishful thinking, it looks scale enough. Technically it's a Pattern type aircraft, designed to a different configuration, but aptly proportioned for flight. If painted in military colors it resembles it's full scale counterpart.

The inspiration behind it comes from the British deHavilland DH 110 Sea Vixen which holds the distinction of being the first two seat all weather fighter to exceed Mach 1. This was accomplished April 9, 1952. Later the aircraft was modified for carrier operations as a strike aircraft and fighter. Also incorporated on the later models was an all moving horizontal tail surface and drooping leading edge in order to carry more stores for air strikes at supersonic speeds.

The model Sea Vixen is radio controlled, spans 64 in and boasts an area of 800 square inches. The original weighed in at 7-1/2 lbs, which is light for a ship of this size. Power is a muffler equipped Super Tigre G-60.

The doorbell went 'dingaling' with one model buddy after another coming to view the balsa bonework. I thought of charging admission, but no, what are friends for if not to criticize every strut and glue bump? I think they thought I must be out of my tree for trying such an unorthodox design, but this to me is where the fun is at..." 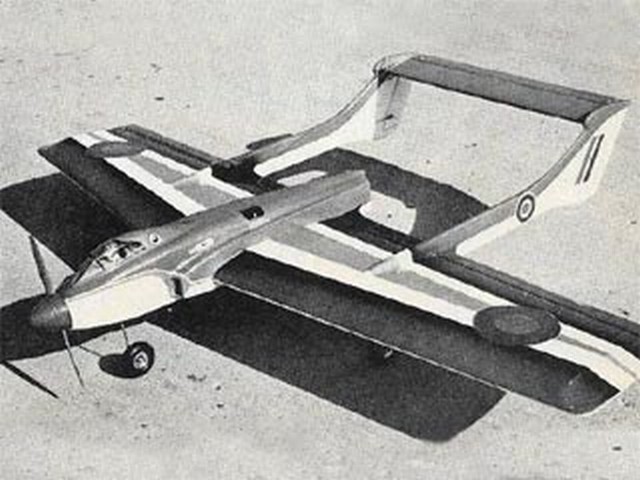