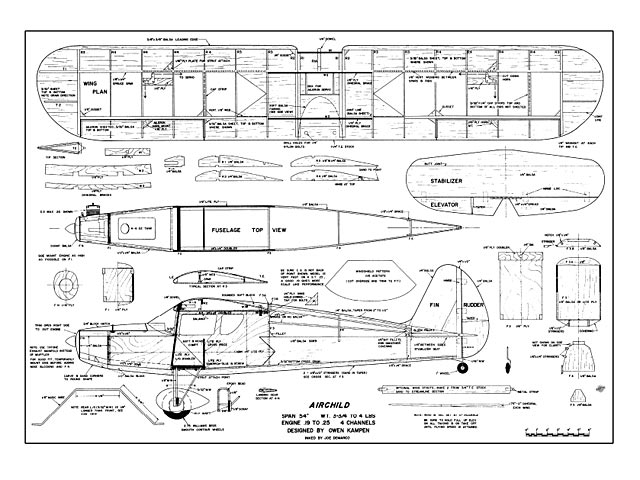 Quote: "Recapturing the local airport nostalgia of his boyhood, the designer based an ideally proportioned 4-channel, 23-powered sport model on the famous Fairchild 24.

A LONG time ago, before television, my family often spent Sunday afternoons riding about the countryside of the Mid-west where I was born. On certain special days when my persistent pleas won out, we would drive to my favorite place - the green-grassed field on the edge of town. It was bordered by stands of tall corn, a two-lane highway, and a gravel road which led to a tin hangar with Royal Airport boldly lettered on its corrugated sides. From the top of the roof a tattered windsock darted in the breeze, and two tall gas pumps - the kind you cranked by hand - stood sentinel near the big sliding doors facing the field. This was the unimposing home of the magic machines that flew, and I knew them all by name. Stinson, Travel-Air, Aeronca, Monocoupe, Waco, Fair-child, Cessna... some had one wing, some had two, and each was as truly individual as the men who had designed them. The most wonderful thing of all was that I could walk up to them, touch the taut fabric, and look inside to see where the pilots sat and the instruments they used.

The Airchild is none of these, yet owes its parentage to several of them, with the Fairchild 24 supplying the dominant genes. The goal was to create the classic look of that early era without the accompanying endless hours of construction associated with a true scale model. Then too, previous scale efforts had resulted in models which retained too many of the tricky traits of their full-size counterparts.

To resolve these problems I decided to begin with the general areas, moments and construction methods of an easy-to-build outstanding flying model. My Air Scout (oz3308) design met these requirements handsomely and so the new lines were laid down over the known quatity of the old.

What emerged was a totally different airplane with a convincing look of the 30s. The simplified construction placed it within the grasp of the average builder who in the past could only admire the efforts of the scale experts. Equally important, the Airchild possesses airborne characteristics which can be comfortably handled by a Sunday flier. The flat-bottomed wing provides superior lift and surprisingly good penetration,
while the fuselage of lite-ply and balsa is rugged enough to handle the rough treatment usually associated with boxey trainers.

The Airchild is not a gas-gulper since it is designed to perform with any of the many fine engines in the 19 to 25 range, and its size allows it to be carried intact in a compact car.

Many model fliers, as well as their full scale counterparts, having been brought up on tricycle wheels, tend to shy away from the fearful tail-draggers. Nonsense! All that is required is a change of tactics in ground handling. Taxiing should be done with full up elevators making the steerable tail wheel quite effective. Once lined up for take-off, elevators are neutralized as airspeed is gained. A bit of rudder for torque, then a touch of up and you're off! Once airborne, the Airchild is quite fast, and though not designed with acrobatics in mind, it does very creditable loops, Immelmans, and rolls. It will spin, given sufficient rudder, and at half-throttle, performs in a scale-like manner. Landings are a bit on the fast side, but no problem. All-in-all, a fine flying model which looks like a real vintage airplane of the Golden Age of flight.

Construction: As the basic structure throughout follows generally accepted building procedures, the following will not be a step-by-step account of how to construct an RC airplane but, instead, will concentrate on information to amplify the magazine plans.

Wing. I find it helpful to assemble and tack glue with Hot Stuff first, and after removing the framework from the board, follow with a second gluing, using Titebond or Wilhold aliphatic resin. Make sure ribs are cut carefully, and accurately, from the proper wood thickness. Protect the plans with wax paper or plastic-wrap..." 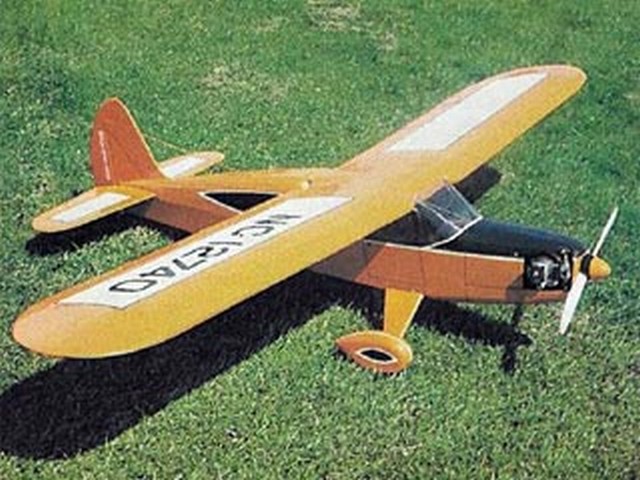