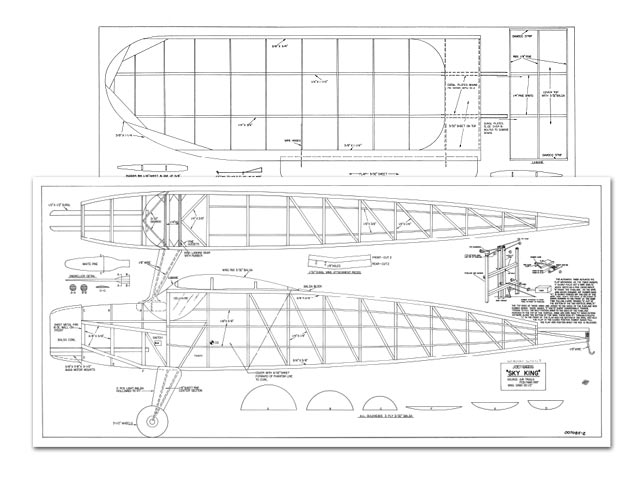 Quote: "The Sky King. Presenting the AIR TRAILS gas model you've been waiting for! The Sky King has clean lines, automatic flaps and adjustable prop, and is designed for simple, rugged construction and easy servicing.

AS 'music hath charms to soothe a savage breast,' so the exhaust fumes from a small model motor soothe the 'savage' model builder. With the odor of burning oil and gasoline in his nostrils, oil and grease on his fingers, and the roar of the motor in his ears, he will forget his troubles so completely that he will ofttimes neglect important school work. A poor report card will touch things off and the gas model will be put away in a closet while the modeler catches up on back lessons. But the temptation will be too strong. After a few days spent exclusively in studying, the modeler will take it out of the closet to 'sort of look it over.' This is the beginning of the end. It's just a matter of a day or two until he'll be flying it again, repairing it, and planning his next gas job.

If you don't think this is true, try building the Sky. King. After its first successful flight you'll be in the same position as the modeler just described. But it's such a happy and satisfying feeling that none of us would want to be without it. However, there's a lion's share of work waiting for us - we've had to divide it into two monthly instalments - so let's get started.

Before taking up actual construction I'd like to point out some of the features of this ship which make it interesting and easy to fly. It is the result of the cooperative efforts of three experienced builders, and we feel that it has several. important advantages.

It is compact and convenient to handle. The wing is built in three pieces - center or cabane section, and two outer panels. The one-piece rudder-elevator unit is detachable from the rear of the fuselage with little trouble.

From an aerodynamic viewpoint the model is particu-larly clean. The wing fits flush atop the fuselage with no outside fittings. Four rubber slings inside the fuselage hold it in place. These are reached through a demountable door at the side.

The ignition system for the motor is mounted on a flat board which is carried inside the fuselage near the trailing edge of the wing. This method provides a painless way of balancing the model. The board is secured by a single bolt, fitting through a groove in the bottom of the fuselage, on which a wing-nut turns from the outside. The groove is 8 in long, allowing ample travel for balancing. A 4 x 8-1/4 in removable door fits into the left side of the fuselage directly beneath the center of the wing. Ignition can be serviced through this door when the wing is attached.

The landing gear is full cantilever and well covered with balsa fairing and balsa tire cuffs. The strength and shock absorption quality do not suffer by this clean design. Built as a separate unit from %" diameter piano wire, the landing gear is attached to the bottom of the fuselage with rubber. Thus any excess landing force is absorbed by the rubber and not transferred to the fuselage. Sections of the sheet balsa covering are cut away, and subsequently covered with small pieces of balloon rubber, to al-low the landing gear to move back and forth.

The motor cowling is rigidly at-tached to the front motor mountings with two small machine screws and is removable in a few seconds, if necessary. A section of the cowling is hinged and swings outward to permit access to the motor for refueling and needle-valve adjustments. After you're satisfied with the motor adjustment, you merely snap down the cowl and the model is ready to take off.

The propeller has variable pitch and can be fitted with individual blades as desired.

The automatic timing switch which controls the length of the motor run has been a life-saver. With it gas models can be flown in relatively small fields. Originally intended as a camera timer, this device is a small, light-weight spring-and-gear system. It can be accurately timed for any period up to I minute. It has never failed us, despite the additional ditties imposed on it, such as clicking a small camera for 'aerial photography' and actuating the wing-flap mechanism for extending the flaps while the ship is in full flight.

FUSELAGE: The fuselage is built to the same requirements as those for a rubber-powered model. Balsa longerons are used with spruce strengtheners at the landing gear and pine at the motor mount. The Pratt type of fuselage truss is used; that is, diagonal braces are added between the upright and vertical braces. Stringers are added to the four sides of the fuselage, and the longeron outside cor-ners smoothed to give it a partially rounded shape. This improves the appearance over the flat-side type of fuse-lage, without the additional trouble that follows an at-tempt to build a completely circular or oval cross section.

Drawing #1 shows the side and top views of the fuselage with complete dimensions. We've found that rubber-model construction can be successfully used in gas models, and this is especially true with fuselage construction. First draw a full-size side view of the fuselage. Nothing better than brown or white wrapping paper is necessary. The first line on the paper should be the datum or thrust line. All the fuselage measurements are referred to this line, as are the wing and tail settings..." 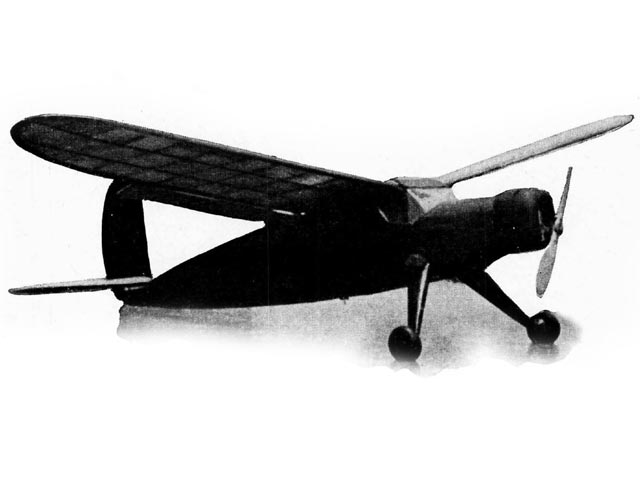