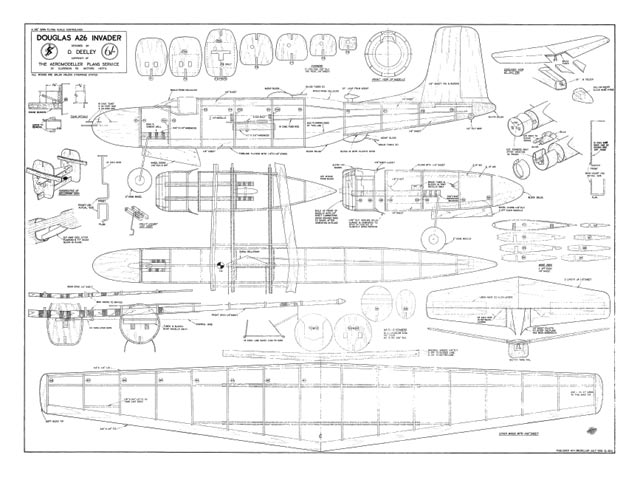 Quote: "In response to the heavy demand from the many I readers who now find themselves in possession of more than one 1 cc to 2.5 cc diesel, we now have pleasure in introducing this tried and proven design to Plans Service. Don Deeley selected the A26A Invader as a 'natural' for twin engined control-line. Fitted with a pair of Elfin 1-49's, his prototype has covered many miles at scale appearance speed of 45-50 mph, and we have no doubt that two smaller or larger engines would provide equal entertainment at a slight variance in speed. It would also accommodate two engines of unequal capacity, though in this case, the larger engine should be fitted in the inboard nacelle.

Construction is both robust and simple. All-up weight at 40 oz is enough to require extra tough control-line wires, yet at the same time does not provide an over-heavy wing loading to spoil its excellent three point landings and general maneouverability.

Start building with the wing, taking care to bind and cement the ply gussets to the spars, except where fuselage and nacelle formers locate. Then cement formers F4 and F5 to the spars, and fit the bottom keel. Bellcrank assembly, formers F1 to F10, the nosewheel and planking between F1 and F6, F7 and F10 follow in that order. Now cut away keels and fit balsa between F6 and FT.

Make up tail assembly minus fin and rudder and fit, then build nacelles onto wing spars and attach undercarriage legs. Plank all over and sand to shape, giving a coat of sanding sealer.

Wings are sheet covered and fin and rudder added, the tail end being streamlined off by a balsa fairing block. Ballast by fitting engines and tanks and adding lead nose weight. Remove the engines for final cowling detail, etc, and attach moulded canopies, gun turrets and scale detail, before colouring all over with silver and black anti-glare panels.

Perhaps the greatest deterrent to the twin is engine starting; however, Don Deeley reports no trouble whatsoever if the following procedure is adopted. Start the outer engine first, warm it up, stop it, fill up the tank again and prime ready to start. Then switch to the inner, start up, set it right, then back to the still warm outer engine, which should soon burst into song." 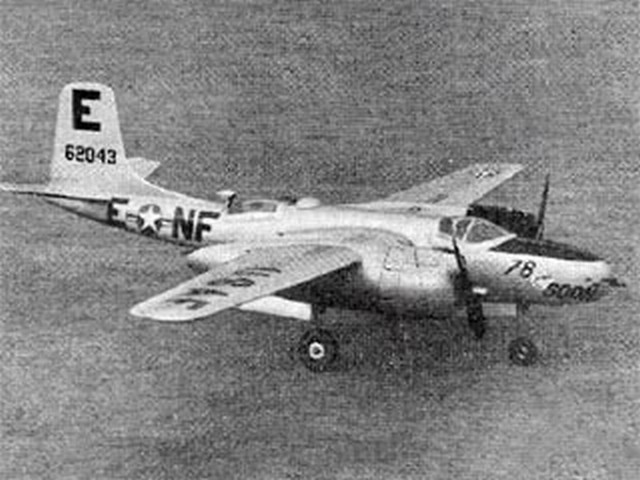