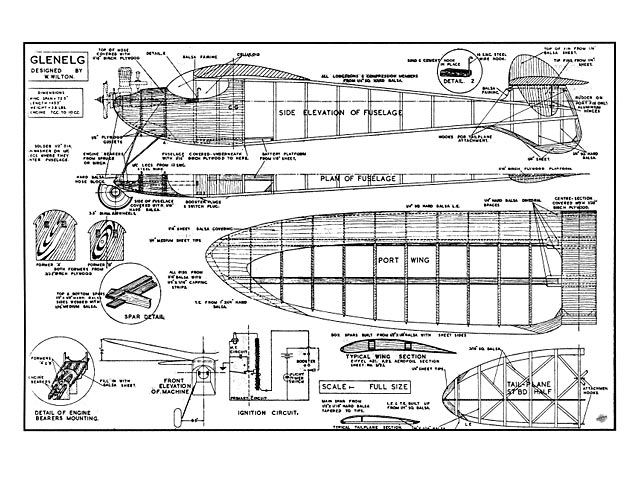 Quote: "October 1945 Aeromodeller. Glenelg. A six foot span beginners' model designed by W. Wilton. Fuselage. Build the fuselage in the usual way, building the two sides first and joining them, in the first place, by formers A and B. Into these formers build the motor mounts. These are of spruce, but if metal is preferred, any builder may build in this bulkhead to take the metal mounts. I prefer wooden mounts, as they are not liable to bending and thereby altering the thrust line, as are metal ones if not carefully watched.

Before wood covering is applied to the nose, shellac the framework well around the motor mounts. Cover the top decking with 1/16 birch plywood first, then the sides, leaving the bottom until the undercarriage has been fitted.

Form the two undercarriage legs from 13 SWG steel wire and thread through the fuselage at the proper stations. Insert hardwood gussets as shown in the plan, and solder a 1/2in diameter metal washer on to the legs where they enter the fuselage. Also solder the joint of the two legs. Internally, the wire is bound to the bulkheads by drilling small holes in each one and passing chord around the undercarriage wire and through the holes.

The loops for the tailplane anchoring are simple steel wire hook, and these must be firmly fixed and cemented. Their positions and functions are self-explanatory in the drawing.

Covering can be proceeded with only after the electrical installation has been built in as shown in the plan. Double check all hooks and fittings, and the under-carriage before covering.

Wing. Select straight-grained hard balsa for all the spars in the wing. These spars are of somewhat unorthodox construction, but the method has proved itself in my last four petrol-driven models. The wing is fast assembled with only the leading edge, trailing edge, and the top of the two spars in place. The forming of the wing tips should be done at the same time, and when the wing is dry, it should be turned over and the bottom spars inserted..."